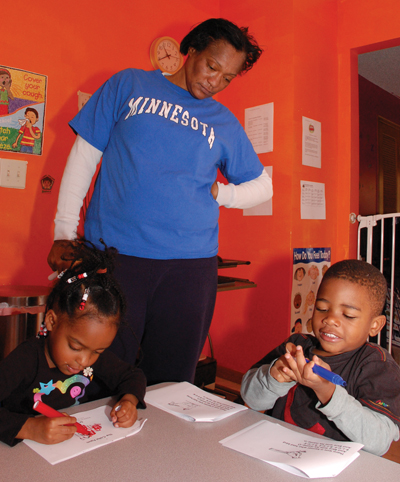 A bill that would authorize home-based childcare providers to vote on whether or not to be in a union is moving through committee in the Minnesota House of Representatives. The Child Care Collective Bargaining Act was introduced in the Minnesota Senate in February. While supporters say the bill would make child care more affordable for working parents, opponents argue that daycare fees could rise because of union dues.

State Senator Jeff Hayden (DFL-Minneapolis) told the MSR during a Council on Black Minnesotans rally at the State Capitol last month, “I support the unionizing of childcare workers.” He pointed out that the bill does not force childcare workers to join a union, but rather would offer the option of voting if they want a union or not.

“If they do get a union, the union will come in and negotiate with the state on their behalf,” noted Senator Hayden.

American Federation of State, County and Municipal Employees (AFSCME) Public Affairs Director Jennifer Munt said in a phone interview last week with the MSR that in-home childcare providers “are occupations that have traditionally been undervalued and underpaid.”

AFSCME officials have been lobbying for in-home childcare unionization for several years. “The workers…deserve to collectively bargain with the State to get the respect, support, and the benefits that they need,” said Munt, who concurred with Sen. Hayden. “It is not people being forced to join a union. It is just giving them a vote on whether or not they want to organize a union.”

Mary Albert of St. Paul and Marline Blake of Minneapolis are longtime in-home childcare providers, and both have met with state legislators in support of the bill.

Said Albert, a nine-year childcare provider on St. Paul’s East Side, “We have to go get training…and go through different criteria to get our children ready for kindergarten. I think people that call us babysitters don’t know what we do. I don’t consider myself a babysitter. I consider myself an educator, a mother, a nurse — whatever else they need for their family.

“It is hard because mostly I’m dealing with young parents, young mothers, and they really don’t understand what parenting is all about,” Albert continued. “They need somebody to sit down and talk to them, and encourage them, and give them resources to help them make it.” 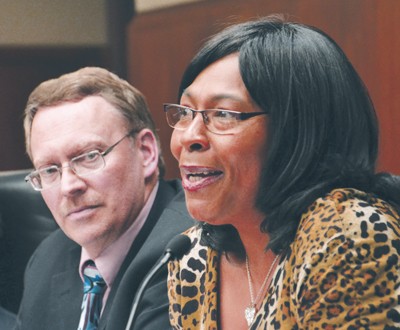 “We don’t just plop the children in front of the television or play all day,” added Blake, a North Minneapolis childcare provider for over 10 years. “We educate our children from six weeks old until they enter school, and the latchkey children that we serve.”

Speaking with lawmakers at the capitol “has been an eye-opener” for Blake. “I think it was very important to really help to educate the lawmakers about the processes and our daily activities and how important child care is for our community, parents, children and the providers of child care.

“[In-home] childcare providers are safe, we are affordable, and we are accessible to the families that we serve within our community,” continued Blake. “That’s the number-one thing we have to convince all the others that are not aware of what we do.”

Although the bill doesn’t affect privately run operations, School Readiness Learning Academy Director Monique Stumon nonetheless expressed concerns about unionizing. “Where does the additional money come from?” she asked. “Parents are barely paying what the rates are now. What I think would end up happening is that [any additional costs] will be passed down to the parents. I think [a child care union] can both help and hurt, but I don’t know what would be best.”

Phyllis Sloan, the executive director of La Crèche Early Childhood Centers, Inc., added that unionization might someday become an issue for nonprofit childcare centers such as hers. “To have the State or the government in position of dictating unionization or not, I don’t feel that would be supportive at this time. There’s much that the State could do to be supportive” of childcare providers, early childhood and school-readiness programs, she believes.

Albert, Blake and Munt all believe the childcare union bill will be approved by the DFL-controlled state legislature this session.

“It’s always a party-line vote,” Munt said. “Democrats vote to give workers the right to vote on unionization…and the Republicans want to deny them that right. I would argue [that] at a time when half of our kids aren’t prepared for school and many of them are living in poverty or [with] poor nutrition, and when our achievement gap is greater here than in Mississippi, we need to focus on the poor kids who need the most help.”

Albert added, “We just want everybody to be treated right and be treated equal. I believe we will do it this year.”

If passed, the childcare union bill “will be a huge milestone for us,” stated Blake. “It will help us a lot to provide more services for families.

“We want the bill passed,” Blake concluded, “because it will help a lot of people. We need to have a voice at the table when people are discussing childcare needs and childcare issues.”