It was a bitterly cold Minnesota wintery day as Ahmay Ya and I drove the last few miles north of St. Paul to Interview the Karen Buddhist Monks residing in the new Karen Buddhist temple near Blaine.

This was my first visit to the new location but Ahmay has been attending events there regularly since the temple was opened on Sept. 24, 2013.

The temple was established by leaders of the Karen Buddhist Community in the Twin Cities. Generous donations and pooling of community resources had resulted in the purchase of a house on five acres of land. Although close to the urban Twin Cities, suburban development has not reached this area. The house is surrounded by forest and small farms. It is close to Carl Avery Nature Reserve which is just a few miles further north.

From the outside, nothing marks the modest rambler as different from other houses on this sparsely populated stretch of road. But to step inside the house at 13010 Lexington Avenue is to enter another world.

Monk U Pa Di Ta greeted us at one of the two front doors and welcomed us in. The room we entered was unheated and might have once been a garage. But now it functions as an outer room. It has a paved wooden floor and is strikingly decorated on the far wall with a series of bright colorful paintings on large panels, each about five feet long by four feet wide depicting scenes from Buddha’s life.

We removed our shoes and entered into the new Karen Buddhist temple. It is home to three Karen Buddhist monks and one novice. A raised altar to Buddha dominated the main wall and has a thick layer of carpets over bamboo mats. We were now in the new spiritual home of Minnesota’s Karen Buddhists.

The monks sat with us on the carpeted floor and we began our interview. My first task was to learn the names of the monks and a little of their stories. We began in a culturally appropriate way by starting with the head monk, U Uttamalinkara, who sat directly across from us.

U Uttamalinkara was born in Amarapura City in Burma, and entered the Mahamuni Buddha Temple near Mandalay, when he was age 11. He was educated there for the next 11 years and spent another 11 years as a novice.

Just two years ago U Uttamalinkara obtained a passport so as to be able to come to the United States. His goal was education — to educate himself and to educate others. His mission is to serve the Karen Buddhists and to help spread Buddhism.

U Uttamalinkara arrived first in Indiana in September 2012. He also lived for six months in Texas, before coming to Minnesota. Of the estimated eight or nine Karen monks living in this country around half of them are in Minnesota.

U Pa Di Ta, the second senior monk, was born in Thamanya, a city in the Karen State that is known as the center for Karen Buddhism. He became a monk at age 37, before escaping the oppressive Myanmar military regime to Thailand to live as a refugee in a camp until allowed to leave for Chicago in 2008.

U Kay Ma Nan Da, third in seniority, was born in the Karen state of Burma. He also escaped to live in a Thai refugee camp when he was just 8 years-old. He joined a monastery and became a novice by the time he was nine and was a monk by age 20.

For the next 12 years U Kay Ma Nan Da would live in a refugee camp and arrived in Minnesota just six months ago.

Shin Ni Pu Na is referred to as a novice. The monks explained that there would have to be four monks at the temple for him to be able to change his title. 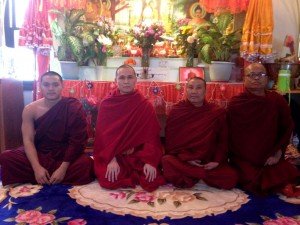 Challenges and plans for the new temple

The monks said their mission is to serve the growing Karen Buddhist population in the Twin Cities. They identified three main principles: generosity, building good character, and meditation.

The monks said their biggest challenges are language barriers. They are able to speak in English as they did during the interview, but said they appreciate that it is harder to learn a new language as adults.

The temple is quiet during the week. Most of the activity at the temple occurs weekends.

“The Karen are busy,” U Uttamalinkara said. “They have busy lives. Family members come mostly weekends and for the big celebrations.”

The monks hope to develop the land behind the temple into a large space for summer celebrations. They would like eventually to have a covered pavilion, along with stadium and a dormitory to hold summer camps for Karen youth.

There was a lot of discussion among the monks about the Buddhist calendar. February is seen as the time for sharing food. This seemed related to cultural beliefs about food and weather and maintaining a healthy body temperature. The monks said that traditional foods like sticky rice and coconut are prepared in February (in Burma) so as to cool the body and release temperature.

Visitors are welcome at the temple. A good time to visit would also be during the big celebrations. The next big celebration will be in April, traditionally held on a full moon day.