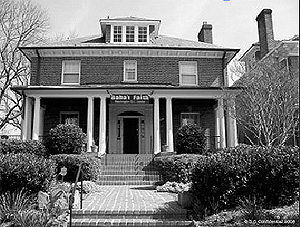 As unrest, hope and change spread throughout the Middle East a religious minority, the Bahai, little-known outside that region, struggles under persecution that has endured since its emergence from Islam in the latter half of the 19th century. In spite of brutal oppression, the Bahai have managed to spread worldwide. Their often inconspicuous centers can now be found dotted throughout countries on every continent.

One such Bahai center is located in Minneapolis’ Phillips-Powderhorn neighborhood. The Bahai do not worship under the direction of a clergy. Instead, a racially diverse group of believers and guests gathers at the center twice weekly for prayer and scriptural study.

“What I found particularly attractive about the Bahai community,” remarks Dave, an electrician who became a Bahai about five years ago, “was how warm and welcoming it was. When I formally joined the Faith, I knew I had found my spiritual home.”

“Home” is not merely a metaphor for the Bahai. A large part of their spiritual work and study is done in the private residences of believers, where groups of formal members and interested individuals gather to read and discuss original texts from the religion’s founding prophets, the Bab, Bahauallah and Abdul Baha. These home-based groups also investigate educational and secondary literature.

One such group meets under the guidance of locals Russell, a graphic designer, and Diane, a graduate student, in their home on Park Avenue.

Diane talks about what led her to the Bahai faith.

“In the late ’60s, while living in a commune in Montreal, I was heavily involved in spiritual study, reading Native American texts, the Bhagavad Gita, and so forth,” she recalls. “One morning I was lying in a semi-dreaming state and I heard some Bahai people downstairs. While listening to them, a strange voice all of a sudden spoke to me saying: ‘This is what you have been waiting for your whole life, just don’t let your ego get in the way.'”

Shortly thereafter, Diane joined the Bahai, primarily out of a deeply intuitive sense of devotion.

“I knew that the world was in deep trouble, and that everything depended on the return of spiritual truth. I needed to find out that such a return had occurred, or I would have lost my faith in God. I believe that the Bahai faith represents the return or rebirth of truth.”

The experience of her husband, Russell, was somewhat different, coming as it did from a more conceptual basis.

“Everyone was searching back in the ’60s. I was no exception.”

Through a Bahai friend, Russell began attending a series of “fireside” presentations on the tenets of the faith. These experiences, followed by an all night conversation, sealed it for him. “I felt like a Bahai inside. Up until then, I had never been a ‘joiner,’ but the tenets of the Faith really captured my core beliefs,” Russell explains. “The Bahai believe in the unity all religions, a single God, equality between the sexes, harmony between science and religion, human progress, and racial unity.”

These ideas may sound inoffensive in theory, but they certainly have not always been received as such.

The faith arose out of Persian Islam in the mid 1800s. Unlike the sometimes rival branches of Shia and Sunni Islam, the Bahai faith is technically a separate world religion, analogous to Christianity in its growth out of Judaism.

The primary prophet of the Bahai, Bahauallah, spent a major portion of his teaching mission in prison and exile, sometimes under torture or other extreme conditions. Bahauallah’s forerunner, the Bab, was executed after promulgating claims that roused envy and anger amongst influential Muslim clerics of his day.

Even prior to the Bab’s execution, his followers were massacred, tortured and persecuted in a manner reminiscent of the treatment of early Christians in Imperial Rome. Bahai believers up through the current day have faced these sorts of horrors, as well as more subtle forms of discrimination, in Persia/Iran under the Shahs, Iran under the Ayatollahs, as well as in many other parts of the Middle East.

“In Egypt,” Russell clarifies, “the only people who can get identity cards are those referred to by Muslims as ‘people of the book’: Jews, Christians and Muslims. An identity card is necessary for just about every aspect of life there, including jobs, car registration and so forth. The Bahai basically cannot participate in the essential activities of the community, politics or commerce. They are invisible.

“There is some hope that a more tolerant and democratic Egypt will change that reality over time,” Russell continues. “But an upsurge in Islamic fundamentalism could lead to even worse persecution.”

The Bahai have generally found a much more welcoming and tolerant environment in Western countries, where converts like Russell, Diane and Dave are not hindered by the hesitation that natives of the Middle East may possess concerning the proclamation of a purportedly new revelation.

While Russell has devoted much of his energy in recent years to advancing the Bahai cause in the community at large, Diane has been taking time to explore her faith inwardly, partially through her graduate school work.

“I’m seeing the world in a broader way,” she shares. “I’m researching other faiths and looking into myself, finding threads of unity in all the spiritual traditions of the world. This is a unity that the Bahai not only acknowledge, but also encourage and honor formally.”

It is precisely this sense of unity and inclusiveness that brought Dave into the Bahai fold.

“I grew up a believing Catholic,” he elucidates. “After the scandals in the Church, I lost my faith in the integrity of the institution, but I still believed in the truth that Christ spoke.”

“I searched for a while, but was again and again disillusioned by the various churches I visited. The Bahai welcomed me and accepted me in a way consistent with the teachings of Christ. When I decided to join them, the challenge for me was to overcome my literal belief that the only way to heaven was through Jesus.”

“I looked for evidence that Bahauallah really was the second coming of Christ,” continues Dave. “After studying Old Testament prophesy, the teachings and experiences of the Bab and Bahauallah, as well as accepting certain aspects of the Christian Bible as allegorical, I was able to break the barrier.”

“I believe that there is one God. God loves all of us: Muslim, Christian, Jew, Buddhist, Native, Agnostic and Atheist. All the killing in the name of religion was never supposed to happen.”