Graphics show the view from 13th Avenue, the inside of the events center, and an aerial of the site plan proposed by Diversified Equities Corporation, the proposal favored in the vote following the Sept. 26 SNO meeting. (Graphics courtesy of the respective hopeful developers)

If Sheridan Neighborhood Organization (SNO) members votes Sept. 26 were all that mattered, a proposal from Diversified Equities would get in the ground post-haste, giving Northeast an event center and 125 rental apartments built such that they could be sold as condominiums when the market improves.

Diversified was one of four proposals for the former Grain Belt Office building and the vacant land to the north of it along Marshall Street NE near 13th Avenue. City development staff will comb through the proposals and figure out what they think will be best, taking into account the neighborhood vote that took place at SNO’s meeting (the results were announced by email). City staff expect to have a recommendation ready for the Minneapolis City Council Community Development Committee meeting on either the 8th or 29th of November.

The fourth group to present, and which received no votes, was Griffin Companies.

The city wants to sell the land for $1.4 million and the office building for $50,000. The city has invested in resolving basement-related water infiltration problems. If the proposers want subsidy or zoning changes, that will trigger additional scrutiny and require that the project include some units affordable to lower-income residents. All but Griffin said they could do the project without further help from the city.

Diversified Equities’ owner, Jon Dickerson, grew up in the Northeast area and went to school here. He managed the Stonehouse Square site just a few blocks away, for a long time. “He can’t be here tonight, he is in Turkey, so that means you get to listen to us turkeys,” attorney John Herman of Faegre & Benson quipped.

Their 125-unit proposal is spread over three somewhat staggered buildings connected by interior walkways. Part would be three stories high, part four stories, stepping up from the street. Outside, the “view corridor” along a promenade that separates surface guest parking from the buildings, gives almost unobstructed views of the main brewery building.

Parking for the units, one stall for each, would be underground. Guest parking (64 spaces off Main Street and 18 off Marshall) meets city codes for the office building’s retail uses. If Diversified can put more underground, or arrange evening parking on the bank site next door, they might be able to decrease the on-site surface parking.

The new buildings would sit back from 13th by 11 to 30 feet, making front yards for units that face 13th, ideal for live/work home businesses needing separate entrances.

The office building would become a restaurant on first floor with an event center in back (under the to-be-revealed stained glass barrel ceiling), which would also serve as the party room for the apartments. As in all the other proposals, an elevator gets added to the north side of the building. There’s an exit staircase added to the south side.

The leasing and management office for the apartments locates in the office building, lower level art studios and other offices go in the basement, which would have substantial windows re-opened. There would be one small space in the apartment building for a retailer, perhaps a coffee shop or convenience store.

Dickerson’s collaborators explained what they would do with the part of the housing site that’s the ruins of the old Orth brewery. “An interpretive square, raising it up so you can enjoy the sun. Possibly, a water feature.”

They say they believe they have found a spot on-site where there could be a field for geothermal heating and cooling, and they have a plan for treating stormwater on site with rain gardens and such.

Diversified Equities said they submitted several financing scenarios, from an all market rate housing plan to one that would have moderate subsidy and have some units available to those earning 60 percent of area median income.

A resident living near Holmes Greenway in Southeast, another Dickerson project, stood up and gave a testimonial that he has been a hands-on good neighbor. 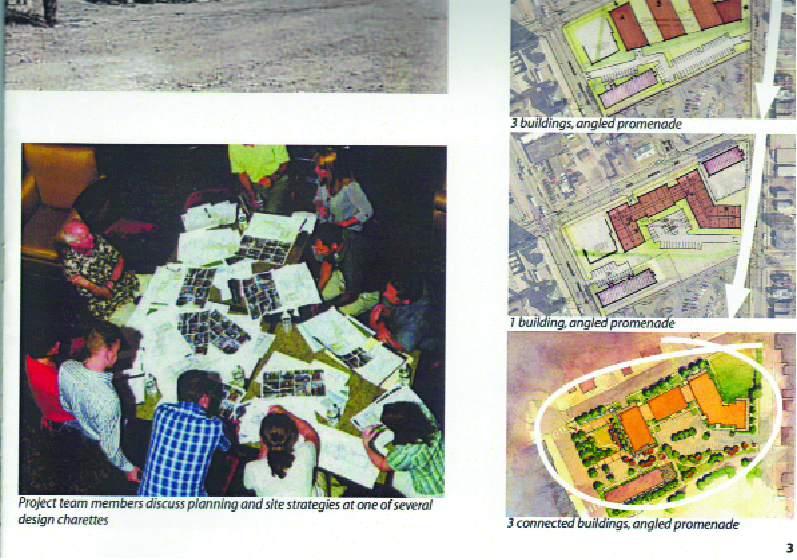 The proposal with the second highest appeal to the SNO voters, Everwood Development and Kaas Wilson Architects, proposed 150 units divided 98/52 in two buildings of entirely market rate rentals with underground secured parking beneath both. They anticipate mostly one- and two-bedroom units ranging from $1,000 to $1,850 per month in rent. Sizes range from a 575-square- foot efficiency to a 1,400-square-foot three-bedroom.

Their design also left a view corridor to the brewery, and they identified several opportunities for locating public art.

Renderings show possibilities for market tents around the public plaza which would be dug down, and presenter Elizabeth Flannery said it’s tempting to think of the plaza as a winter skating rink. No permanent retail space is proposed, Flannery said there is already a lot in the area.

In response to questions, they said their choice of brick, Hardie plank and metal siding materials was meant to give somewhat of an industrial appearance, but they would be willing to discuss other options.

The two companies worked together on parts of the Midtown Exchange, and Flannery lived in Northeast for most of her adult life.

Coldwell Banker Commercial-Griffin Companies presenter Jeffrey LaFavre said he’s more used to a collaborative process, and if selected, would work with the neighborhood.

“What’s the [market] demand?” he posed. He said there are two suitors, national companies, one a professional design firm, for the office space, though did not say who they are. He commented on the number and average incomes of people under age 30 within five minutes of the project area, indicating strong demand for the housing part.

Megan Elliott, an associate at Meyer Borgman Johnson, would work on the project. Her credentials include work on the brew house and the Soap Factory. She’s on the Heritage Preservation Commission and an association of professionals who deal with construction and history.

They talked about preserving the Orth Brewery ruins with a construction buffer zone, and configured their building plan to give a 4-story building that forms a screen onto which movies or a changing mural could be shown, visible from the ruins plaza. The main housing building would be concentrated at 13th Avenue, with 82 spaces of surface parking and 66 underground, and the units going up five stories. Though dense, the building would have a light well in the middle such that there could be daylight in every unit.

LaFavre stated that they would be seeking tax increment financing assistance from the public to make the project work.

William D. Hickey of Collaborative Design Group showed slides of several projects his firm has been involved in, including Split Rock Lighthouse to Bandana Square, Midtown Exchange, the Armstrong House (building restored and moved), Nicholson Hall at the University of Minnesota and the Nicollet Park Pavilion. He said their current lease runs out in April of 2013 so they would have to be done with renovations by then.

All historical elements of the office building would be preserved, with no city subsidy. The architect firm would occupy most of the building, 10,000-plus square feet, with another tenant sought for the prime space at the main entrance, and other complementary firms upstairs.

Hickey said that while 35 office parking spaces were called for in the city’s request for proposals, many of their staff commute by bus or bike, so they could work with the developer of the other parcel to help meet their parking needs. He said the firm would bring 12 new jobs.

With all due respect to the many other architects in the room, he said, “We’re the best in the business, we’re community oriented, this would be a signature building for us and the city.” 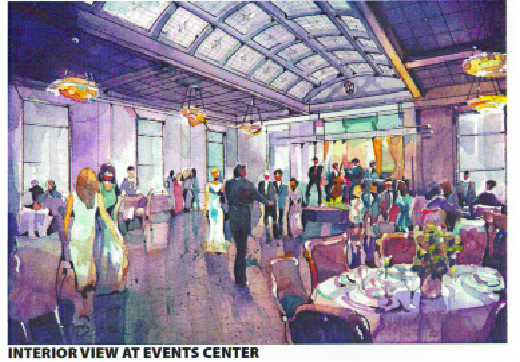