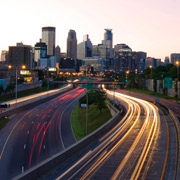 The law directing the nation’s priorities for transportation and infrastructure expired in 2009, and instead of crafting a new one for the succeeding six years as per tradition, Congress extended the expired one continuously. Yesterday, however, the House Transportation and Infrastructure Committee’s chair John Mica (R-FL) unveiled the “American Energy & Infrastructure Jobs Act” on which the committee will vote on February 2nd.

The cover art adorning the summary depicts a congested highway and a pipeline, which sets an unfriendly tone for advocates of alternative transportation and energy, and the bill’s text confirms this tone. The benignly named Act would eliminate funding for the Nonmotorized Transportation Pilot Program and the Safe Routes to School program (which provides resources to enable kids to safely walk & bicycle to school), with the argument that they are not in the national interest. Bike MN took a closer look at the Act and found a few more not-so-benign eliminations—including getting rid of bicycle and pedestrian coordinators in state Departments of Transportation.

The bill’s main focus is to give more autonomy to states in deciding their transportation priorities, and does so by eliminating federal funding designation requirements. In theory, this can provide more flexibility for states, but it can also provide opportunities for short-sighted ideology to take precedence over important policy—for example, funding highway expansion instead of fixing deficient bridges, as Smart Growth America points out.

We have talked about the smart policy behind a National Infrastructure Bank before, but this bill does not establish such a bank. Instead, it commits money to an existing loan program, and expands federal support for state Infrastructure Banks, which aren’t currently common. The bill also aims to reduce the approval process for road projects, and points to the example Minnesota set in the speedy reconstruction of the I-35W bridge.

To Representative Mica’s credit, the bill contains no earmarks, and it even gives states more power to toll Interstate and Non-Interstate Highways, though it is only new capacity on Interstate Highways that can be tolled. Tolls are an important tool for managing congestion and providing revenue for our transportation system. Notably, the bill doesn’t tackle other substantial revenue issues like the gas tax.

This bill provides a familiar direction for America’s transportation, in that it redirects from recent progress in alternative transportation, and instead turns priorities back to automobiles and highways. This is evidenced by its proposed elimination of nonmotorized funding, and its new limits on passenger rail, including a 25% cut to Amtrak’s operating subsidy.

Improving alternative transportation and infrastructure may not be appealing for conservative ideologues, but it is most certainly in the national interest. Our fossil-fueled auto-dependence is proving harmful to our health, our environment, and our financial well-being. We need an actual new direction for transportation, not a return to the policies that created this dependence.