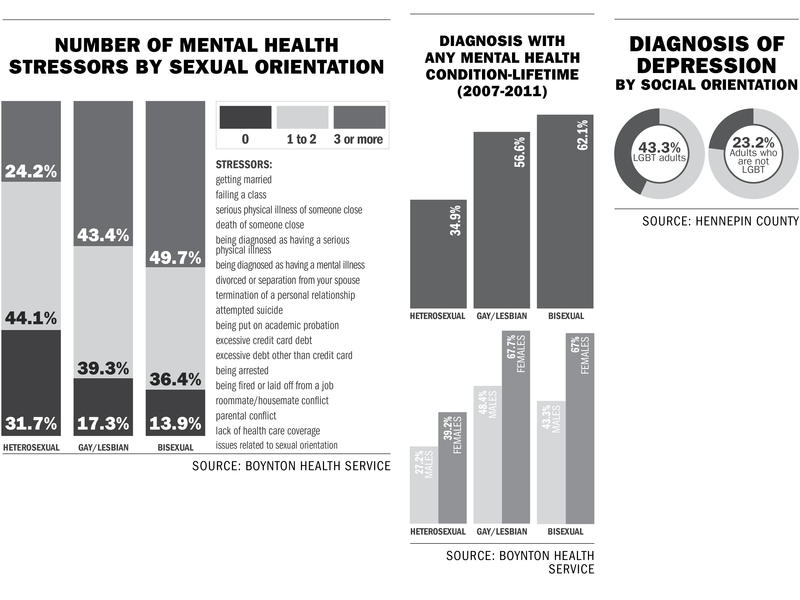 The University of Minnesota psychology student, who identifies as transgender, said she has been traumatized ever since.

Neumann has been diagnosed with post-traumatic stress disorder, which sometimes required hospitalization, as a result of the cruelty she experienced for her gender identity, she said.

MN Daily editor’s note: This is the second in a series exploring local disparities in queer health. It uses new data relating to LGBT health that has been made available through Boynton Health Service and Hennepin County for the first time this fall. Click link to read part one, New data out on LGBT health in Minnesota shows health care disparities.

For the first time, Boynton Health Service and Hennepin County have each released survey data specific to the lesbian, gay, bisexual and transgender community this fall. The data show significant mental health disparities that suggest a need for more resources and better training to meet the needs of LGBT patients, said Sarra Beckham-Chasnoff, a senior psychologist for University Counseling and Consulting Services.

More than 43 percent of gay and lesbian .2pt”>students identified having three or more mental health stressors — such as failing a class or parental conflicts — in Boynton’s College Student Health Survey, compared to almost a quarter of heterosexual students.

“Whenever you are talking about people from marginalized communities, there is a type of stress that these folks experience that students from the majority culture don’t,” Beckham-Chasnoff said.

Hennepin County’s recently released 2010 survey data of adult LGBT residents echoed the disparity. It showed 43 percent of LGBT adults reported having ever been diagnosed with depression, almost twice that of heterosexual adults.

“When people are feeling isolated, that’s a breeding ground for that depression,” she said.

Neumann said she grew up hating herself as a result of her family’s religious background and being bullied.

“Even if you can get past [hating yourself], the fear of being disowned by your family is crazy,” Neumann said.

Psychologists typically only take one or two classes that address LGBT concerns, Beckham-Chasnoff said, which “inadequately prepares professionals to really work with the nuanced issues that LGBT clients present.”

She said psychology training programs should make training on LGBT-sensitive issues a priority.

Irene Greene said she has seen numerous mental health conditions among LGBT patients as a result of discrimination and isolation.

Greene, a local psychotherapist and educator, has been a member of LGBT Therapists, a network of LGBT-identified and allied therapists in Minnesota, for 30 years.

She said it’s helpful for LGBT patients to have therapists who understand the social discrimination and prejudice they experience.

“It’s a very personal issue for me,” said Greene, a self-identified lesbian who came out about 30 years ago.

Within the past year, Greene has treated LGBT patients who have undergone conversion therapy — an attempt to change a patient’s sexual orientation and “change a patient’s biology and reprogram their thoughts.”

“Promoting self-hatred therapy is what I would call it,” said Greene, who added that every major medical and mental health organization in the country has issued a statement condemning the use of reparative therapy.

She said the conversion therapy can drive LGBT patients into depression, self-loathing, suicidal thoughts and shame.

Bisexual students in the Boynton survey identified having three or more mental health stressors at a rate higher than gay and lesbian students. These students also reported being diagnosed with mental health conditions at a higher rate.

“I think this goes against this modern trend that bisexual students maybe should be doing better than gay or lesbian students because of this myth that we’re only half-queer,” said Lauren Beach, a University doctoral student and chair of the Bisexual Organizing Project.

Boynton’s survey didn’t include students who identified as transgender or .9pt”>gender-nonconforming because there weren’t enough respondents to compile accurate data for that population, said spokesperson Dave Golden.

Alex Iantaffi, a researcher from the University’s School of Public Health, said the transgender population faces greater prejudice and is less visible because it’s absent from media images and has smaller numbers.

Neumann said PTSD and the stress of not receiving trans-inclusive health care have driven her to suicidal thoughts and that anti-depressants haven’t worked.

“They don’t have a clue what to do,” Neumann said. “The system is just full of major disparities.”

Eli Coleman, professor and director of the University’s Program in Human Sexuality, agreed that the problem is rooted in today’s social and political climate surrounding LGBT issues.

“Basically, any minority is going to experience greater stress from the challenges of society that still stigmatizes and social prejudices,” Coleman said.

He said it’s led a lot of public health officials to “try to promote more social tolerance and less homophobia and prejudice as a means of improving the health and welfare of this stigmatized population.”