Selling the NBA to a White fan base historically has been a challenge. First it was seen as second class to college basketball.

Then came Black players in the late 1950s. Later, the growing Black rank-and-file were being seen as nothing more than drug users during the 1970s.

Then came Earvin Johnson and Larry Bird in the 1980s; that temporarily brought new “team-first, me-second” notoriety to the NBA. Then came Michael Jordan, who transported the league to a marketing mountain high.

Then came the influx of non-college graduates in the 1990s, which along with escalating salaries began creating a wedge between them and the paying White customers. All the while, NBA Commissioner David Stern and his minions blindly promoted the league as some kind of “We Are the World” entity but ignoring a clear and ever-present fact:

The majority of the players are Black.

Then, an ugly incident in the final minutes of a contest in Auburn Hills, Mich. on November 19, 2004 set off a Pandora’s Box-like chain reaction of broad-stoke blaming, widespread character assassinations and knee-jerk perceptions on the league’s players, which some believe the NBA never will recover from. Thus, we have today the “NBAAA.” 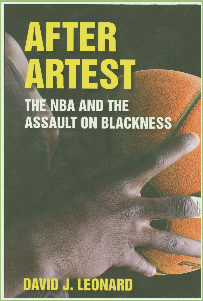 The “AA” stands for After Artest, the title of David J. Leonard’s new book, After Artest: The NBA and the Assault on Blackness (SUNY Press), which came out a week after L.A. Lakers player Metta World Peace, formerly named Ron Artest, was suspended for throwing an elbow. As an Indiana Pacer, World Peace was involved in the 2004 so-called “Palace Brawl” involving players from the Pacers and the Detroit Pistons and spectators in the stands at the Palace of Auburn Hills.

Leonard, a Washington State University associate professor who teaches on culture, gender and race, wrote that the fight served as a “aha point” for the NBA.

“Within a White supremacist imagination, he [Artest] was an animal who could only be caged and controlled for so long. The brawl was thus about Artest, or more broadly, the NBA’s players and its culture,” adds Leonard.

After reading his book, we talked to the author by phone.

“I had a beginning outline of a book that was going to be on race and the NBA,” explains Leonard. “It would have been an entirely different book…then the ‘Palace Brawl’ occurred, and while I was writing on that then other things began to transpire with the dress code [and] the age debate.

“I would have written a book on race and the NBA…with overlapping themes, but the Palace Brawl and the media response to it” added to the book’s overall focus, continues the professor and author.

The late MSR senior columnist Kwame McDonald and I often referred to pro sports as 21st century Roman games, where the largely White spectators use a thumbs-up or down approach to the mostly Black players they watch.

Leonard adds, “You have the fans surrounding the players, literally functioning as judge and jury, constantly watching, surveying, observing and controlling everything from boos to complaining. It’s not surprising that the vast majority of mainstream media explained the Palace Brawl as the result of the tension and conflicts between the primarily White fan base and the primarily Black players.

“What I think is missed is the power differential: It is obviously the media [who] partners with the owners who have the power to control, demonize, ridicule and punish a player who either doesn’t meet expectations; defies the requirements not only on the court but also off the court; stumbles in making a mistake; or any number of things that you do see literally and metaphorically, as you say thumbs up or thumbs down, and then the consequences of that,” he continues.

Although it had the potential to be written in scholarly fashion, After Artest was a quick read and will engage any reader as Leonard discusses three main points: new racism, White racial framing and anti-Black racism in his examination on the league after November 19, 2004 — a date that lives in NBA’s infamy.

“I’d love anyone and everyone to read it, but I think the audience I wished most would read it [are] those who are sitting in the stands and think of basketball as…just a source of entertainment,” he surmises. “I want those readers to think about what is the larger context, the larger consequence of the institution of sport but how sport — in this case, basketball — functions in our society.

“I also want people to read it because so often the sports media and society at large treat athletes, and particularly Black athletes, as little more than commodities. By doing so, [it] dehumanizes and devalues [them].”