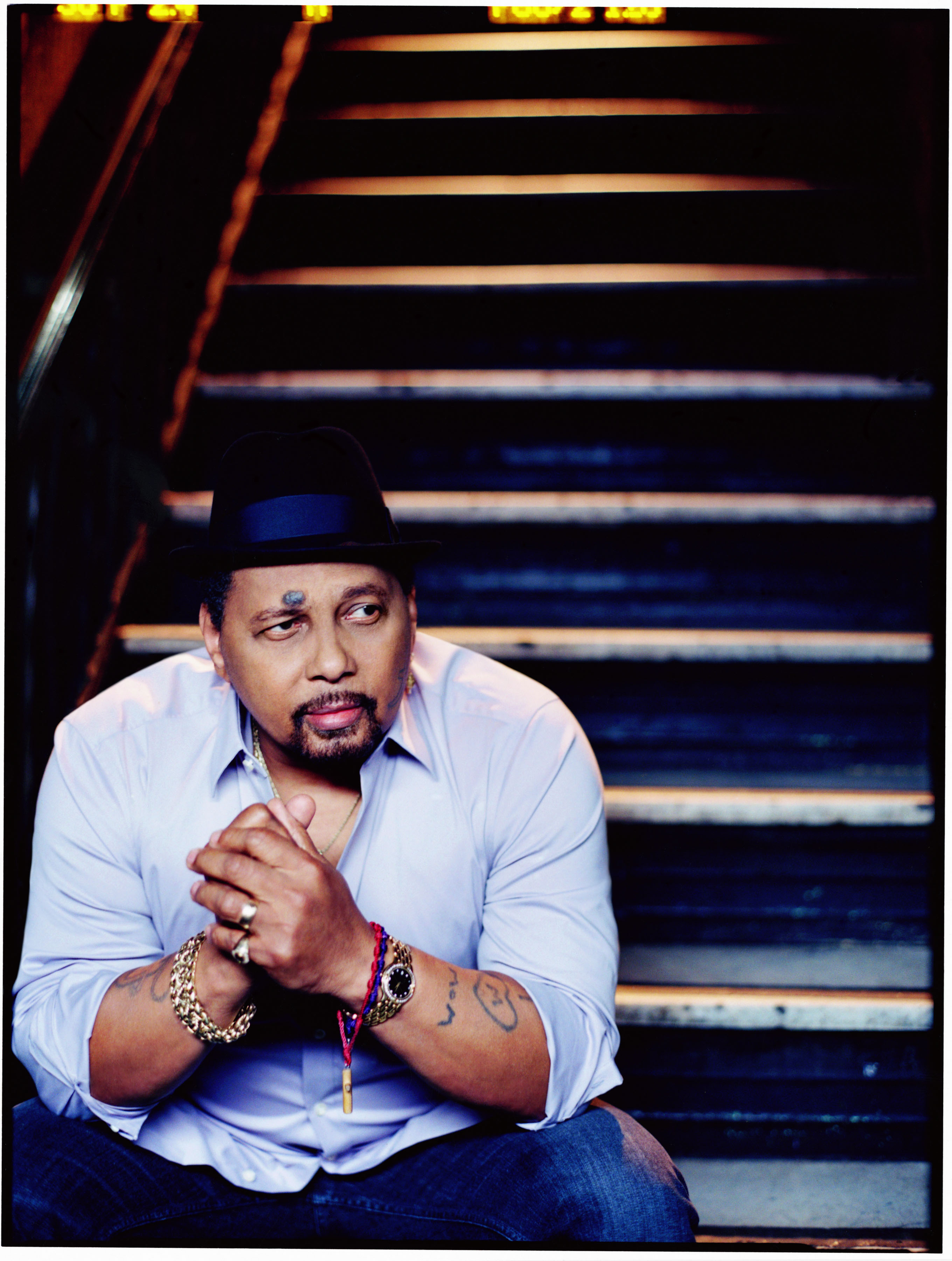 The atmosphere is laid-back Dockers and sunskirts mixed with the nighttime elegance of suits and haute couture. Concertgoers stream into the Dakota jazz club, the pulse beat of downtown Minneapolis to settle in and be moved by music.

Aaron Neville emerges on the intimate stage of the Dakota Jazz Club, garbed in casual jeans, his traditional baseball cap, and a dark-colored T-shit emblazoned with an American Bald Eagle. His quintet of David Johnson on electric base, Michael Goods on keyboard, Earl Smith Jr., on drums, and Makuni Fukuda on electric bass, settle inot position, the house lights dim, and the audience prepares to move.

One attends an Aaron Neville concert not knowing what to totally expect. The third youngest of the four famous brother, Aaron Neville comes out of New Orleans gospel sound, flying to national recognition back in 1966 with the release of “Tell It Like It Is.” It was the beginning of a continuous touring career that has seen Neville rock thru the doo-wop influences of the ’50s, explore rhythm and blues, tinker with country and western, and add a little bit of popular pop and good old soul funk to his amazing repertoire.

Looking around at the crowd, Aaron Neville is the ultimate audience pleaser. On “You’re the Girl of My Dreams,” he pulled out his doo-wop roots. You can see folks tapping away with their hands on their knees, a foot stomp here and there, the sashay of shoulder moving to the rhythms. In” Long Time Coming,” guitarist Funkuda made his base notes flutter like a flute.

Classic tunes abounded throughout the evening, including “Amazing Grace,” “The Funkster,” “Everybody Plays A Fool,” “A Long Time Coming.” And 40+ years later his signature song “Tell It Like It Is” is still a crowd pleaser as numerous fans fought to stay in their seats, their body motions pulling them into the evening’s rhythms and soul.

Concertgoer Ashleigh Still, a local professional pianist herself, commented in between songs “there has not been a bad note… every time, every player. Even though they have played these songs a million times, they all play from their soul and you can feel it.”

There was an added element to the evening, a surprise to those in attendance. Aaron’s oldest brother, Charles Neville joined the festivities on his infamous tenor saxophone. “The Horn Man,” Charles is considered the family jazzman, specializing in improvisation and performing with such legends as Jimmy Reed, Bobby Bland, and Junior Parker and B.B. King. He treated the audience to a sanctified saxophone solo on “Yellow Moon,” the title song of a CD that earned him a Grammy in 1989.

After the performance, Charles confided to me after the performance “Yellow Moon” is very spiritual to me. “My brother (Aaron) wrote it and I play it,” he stated quite matter-of-factly. And that he did. Charles enhanced the moment with hyped up claves on via cowbells on “Beaza Mais Mucho.” His vivacious tapping of drumsticks before grooving on the sax added a Latin bass line to the tune. The beat was truly detectable, surrounded by a whirlwind of exciting sounds generated by electric keyboards, drum, and bass. The rhythm section was totally in synch, funky fusions containing numerous

The roots of the evening were still the fertile imagination of Aaron Neville. His songs connect with the audience and the quintet performed tow solid hours that covered the gambit of sweet ballads infused with R&B, soul, country, blues, gospel, Latin jazz, and jazz-funk. No wonder Neville has been nominated for 16 Grammies, winning three. The dynamic behind the Aaron Neville group is the enormous range of their unusual collective rhythms and tone quality, coupled with enriching ethnic traditions that crosses such a wide range of musical sounds.

At the end, the crowd leaped to their collective feet and clapped, my own hands echoing the applause for this masterful performance of Neville funk. And then, a little encore, and the standing crowd could shake and shimmy, shout and sing… and finally totally let go to the sounds of Aaron Neville and his quintet!