Netroots For The Troops, a nonprofit dedicated to shipping care packages to U.S. military troops in Iraq and Afghanistan, organized its fourth annual event last weekend alongside Netroots Nation in downtown Minneapolis.  With help from individuals and corporations across the country, Netroots For The Troops raised money to send 300 care packages on Saturday.  According to Tony Gattis, the executive director of this nonprofit, the amount of money spent on the care package items was between $30,000 and $35,000 of which $20,000 was spent at the downtown Walgreens.

Gattis explained that, in previous years, the boxes contained anything from foods to socks to flashlights to DVDs.  This year, probably the most valued item in each box was two pairs of Mechanix Wear gloves.  Mechanix Wear is a company based in California that makes specialty gloves for all types of use—anything from working on car engines to gardening at home.  These gloves are expensive, but Mechanix Wear donated 156 pairs and gave Netroots For The Troops a deal on the remaining 444 by treating the nonprofit as a wholesaler.

Tarryl Clark, a Minnesota DFL candidate for Congress, was also helping to stuff care packages.  She agreed with Gattis about how much the troops value gloves like these.  Another essential item was baby wipes.  Gattis indicated that the troops use baby wipes as an all purpose cleaner, whether for a piece of equipment or to just to wipe the sweat off their faces.  Other products used for daily hygiene are not easily placed into the care package though, because there are restrictions on putting food and soap in the same box on an airplane (science lesson: soap expands high up in the air). 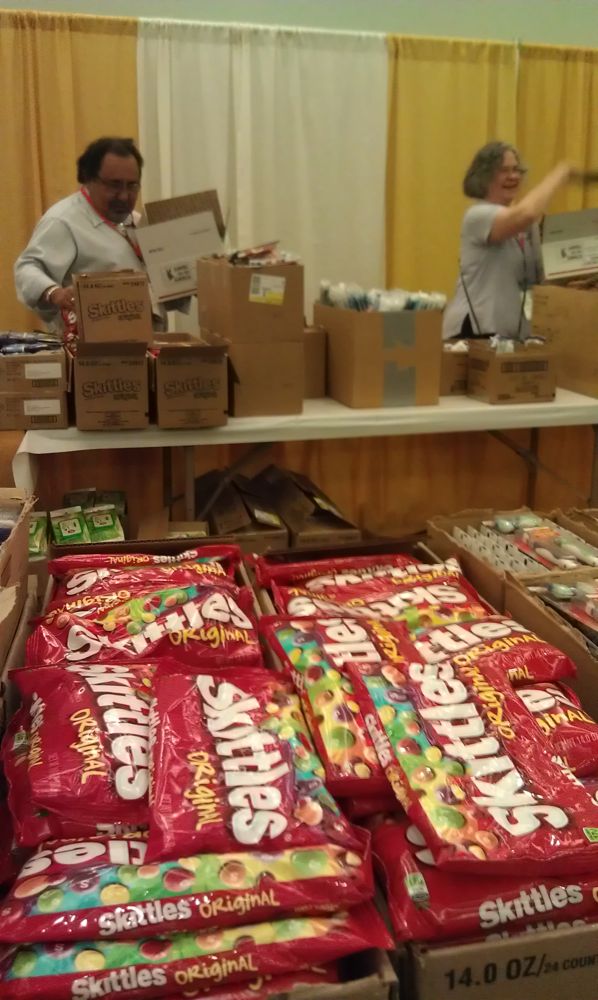 Another political Minnesotan stuffing boxes was DFL Congressmember Tim Walz from the 1st District, who is also the highest ranking enlisted soldier to ever serve in Congress.  He mentioned that he was putting a letter into each of the care packages.  As he worked, Walz spoke to a gay man about Don’t Ask, Don’t Tell.  This man, who said he knew he could never serve in the military because he would not hide who he was, thanked Walz for his vote to repeal Don’t Ask, Don’t Tell.  Walz told him to “keep fighting the fight.”

Netroots For The Troops is focused on raising money to send care packages to those serving in the military.  Gattis said their smallest donation last year was $2 sent in cash.  The sender said it was all she could give but she figured every dollar counts.  In the eyes of a nonprofit, she got it right.  Her $2 may have bought some baby wipes, or maybe just a jar of Jif or a package of Skittles.

Find out more about Netroots for the Troops at http://netrootsforthetroops.com/.