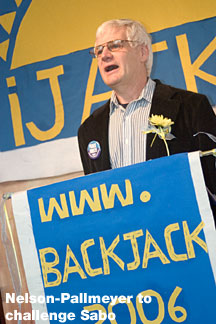 Martin Olav Sabo has been a fixture in Minnesota politics. After 17 years as a state legislator, he also has represented the Minneapolis’ Fifth Congressional District for more than a quarter of a century. He has been a loyal and sometimes effective Democratic congressman—voting consistently along party lines and bringing home substantial amounts of money for Minnesota projects, even as he has tended to shun the spotlight and work quietly behind the scenes.

He has been easily re-elected each of those times with minimal opposition from Republicans or from within his own Democratic party. One of his toughest most recent challenges came in the 1992 election against fellow DFLer Lisa Niebauer-Stall, who, though outspent 18 to 1 in the campaign, still received more than 25 percent of the vote.

In the 2006 Congressional race, University of St. Thomas theology professor and author Jack Nelson- Pallmeyer has announced his intention to oppose Sabo for the DFL endorsement this spring. Pallmeyer’s candidacy has emerged rapidly out of dissatisfaction with Sabo’s leadership skills and stand on the Iraq War, and has been fueled by a grassroots movement of progressive Minneapolis citizens.

About a month ago, Sabo held a town hall meeting at South High School in Minneapolis for the express purpose of discussing U.S. policy in Iraq. Mayor R.T. Rybak and Air America Minnesota’s former commentator Wendy Wilde emceed the forum from the stage overlooking a half-full auditorium.

In his opening remarks Sabo criticized Bush’s war policy, noting that he voted against the resolution authorizing the war, and indicating his support for Congressman John Murtha’s proposal for prompt withdrawal of U.S. forces in Iraq. But he refused to connect the war to the need for oil and gave no indication that he would be a leader of anti-war efforts in Congress.

During public comments that followed, a long line of speakers stepped to the floor mike. They had been asked to respond to questions about a timetable for U.S. withdrawal from Iraq and the oil-war relationship, among others. With few exceptions, the comments were strongly-worded diatribes against America’s presence in Iraq. Sabo was criticized for his comments on the oil connection and for continuing to vote to fund the war.

The town hall gathering set off a firestorm of activity. Within days, a meeting had been called at Holy Trinity Lutheran Church in South Minneapolis to discuss running a stronger anti-war candidate against Sabo. Nelson-Pallmeyer, a member of the St. Martin’s Community in the Seward neighborhood and a popular speaker on issues of peace and justice, had indicated a possible interest but wanted to get the sense of the group’s commitment to his candidacy before making a final decision. The response at the church meeting was positive, and several people offered to lead a potential Nelson-Pallmeyer campaign. Following a second meeting of supporters at Nuevo Rodeo at Lake and Minnehaha, Nelson-Pallmeyer decided to run. A campaign was quickly organized, and within a few weeks there was a website, office and staff in place.

Nelson-Pallmeyer made his formal announcement as a candidate a few weeks ago before a standing-room crowd jammed into a South Minneapolis coffee house. He explained why he was willing to give up “a perfect job” and sacrifice time with his family to take on a respected and long-tenured opponent like Sabo. “I am running,” he said “out of a profound sense of urgency, possibility and responsibility. I am running because the Bush administration’s reckless agenda is destroying our country” and because “more of the same politics from Democrats won’t stop the bleeding … we are a nation in desperate need of bold, energetic leaders …. We will demonstrate the power of grassroots democracy to empower and energize the body politic and, in doing so, we will send shockwaves throughout the political establishments of both Republicans and Democrats.”

In an interview after the speech, Nelson-Pallmeyer said that the town hall meeting was the tipping point in his decision to take on Sabo. He was unhappy with the congressman’s statements that the Iraq War is not about oil, his vote to fund the war, and his seeming inability to take a leadership role in the Democratic Party on that and other issues.

The immediate goal of the campaign is to organize for the DFL precinct caucuses March 7, where Nelson-Pallmeyer hopes to at the very least block Sabo’s endorsement. He also plans to invite Sabo to participate in a public forum prior to the caucuses. Because he wants his effort to be for and about ordinary people, Nelson-Pallmeyer will only take individual donations of $100 or less. He wants it known that his is not merely a symbolic candidacy. “This is serious business,” he said. “We are going to pull a major surprise this fall.”