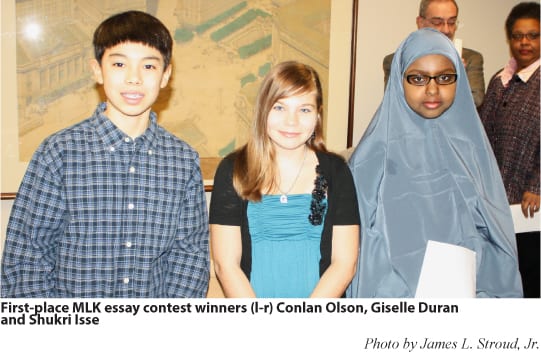 Anyone skiing at Theodore Wirth Park this winter has gotten to know one team very well. Nellie Stone Johnson skiers, decked out in blue and yellow, have become familiar faces on the Wirth ski trails.

Kids who began the season in November with wobbly legs and shrieking during downhill runs have transformed into steady and strong skiing specimens, keen on technique, speed and stamina. Feeling at home on the hilly cross-country ski course, the team has fearlessly careened into the snow season and hasn’t looked back since.

The Nellie Stone Johnson Ski Team is quite an anomaly on the trail. Nordic skiing, as its name suggests, is a legacy extending from the Scandinavian heritage of the state. Historically, great cross-country skiers come from households and communities that have supported skiing. Whatever the limiting factors may be — social, cultural, or economic — African Americans are severely underrepresented when it comes to skiing.

“If your parents ski, you will ski,” said Foundation Director John Munger, who grew up skiing in Minneapolis. However, contrary to Nordic skiing culture, eight of the 12 Nellie Stone Johnson Ski Team members are Black.

The organization, based in Theodore Wirth Park, sees itself as the backboard by which young people can launch into a lifetime of learning and pursuit of healthy, fun and active lifestyles.

“Our goal is to instill a passion for outdoor sports with these kids. Once they have that drive, our job is to remove the barriers that make the attainment of any of these goals possible,” Munger explained. “The truth is anyone can be a good cross-country skier. You just need to get some skis under your feet. These kids are paving the way for their communities, and really excelling at the sport.”

With that attitude in mind, the Nordic Ski Foundation has set up a broad base of programming that strives to introduce kids who might not otherwise be inclined to skiing and support them as they develop as athletes. Incorporated into that program are training trips, year-round coaching and racing experiences. The long-term goals of the program include nurturing potential state, Junior Olympic, or national champions. But for now, it is all about fun, and hooking kids on skiing.

Recently, the Nellie Stone Johnson Ski Team embarked on their first training trip. The two Nellie Stone Johnson Ski Team coaches, along with two volunteer chaperones from the Major Taylor Cycling Club, Jeremy Williams and Jemiah Aitch, loaded skis, snow pants and squirmy legs and headed to the famed Birkebiner Trails of south central Wisconsin. Their trip included a smorgasbord of skiing activities including training, a race at Telemark (home of the largest cross-country ski race in North America), a night skiing experience, and all the other fun components of team travel, like card games, pizza, and pancake breakfasts.

“Everything was pretty new for them, particularly skiing at night. You know, city kids are leery of the dark woods,” remarked Williams, himself a seasoned skier, commenting on both the skiing-related as well as additional aspects of the trip.

The team experienced many firsts on the trip, including racing. The team was outpaced in their race by the more experienced competition, but that didn’t dampen their spirits.

“I was really happy that they were not discouraged,” said head coach John Miller, who watched his athletes maintain their enthusiasm even as they took some spills on the course. “What I saw was kids coming away from this experience just wanting more.”

Many of the kids on these teams are entering uncharted territory for themselves and their families. “My mom says [it’s fine] as long as I’m having fun,” said Raequan Wilson, who skis for Anwatin and finished in fourth place in the Anwatin relays last week with his teammate Jezeir Bradley.

Anthony Taylor, a founding member of the Major Taylor Cycling Club, who has been instrumental in setting up a partnership with his club and the Nordic Ski Foundation, commented, “I think one thing that happens to the African American community is that we assume that if we or our kids pursue a sport like skiing, it will not be with other Black families. This is a great platform to change all that.”

With a smile still plastered to his face after finishing his leg in the Anwatin relays, Nellie Stone Johnson sixth grader Ezra Blevins put it simply, “I want to be a better skier and learn more tricks.”

That is music to Coach John’s ears, who skied competitively in college. “I like coaching kids because one of the participants in this program could be a future Olympian, and that’s exciting.”

Many of the kids are already looking forward to joining high school teams. With years of experience already under their belts, the kids will start ninth grade with a leg up on their competition.

Whether the kids decide to pursue skiing at a competitive level or simply fold these skiing moments into experience, cross-country skiing has become part of their identities. Jemiah Aitch, who had just watched Ezra compete in the Anwatin relays, added, “The most important thing is that they have fun, and that they associate fun with winter sports.”

Since snow in Minnesota is a given, these kids will hopefully find time on the trails for the rest of their lives.

Ingrid Remak grew up cross-country skiing in Theodore Wirth Park. As outreach coordinator of the Nordic Ski Foundation, she works to engage the community in the numerous Loppet programs and events throughout the year.