Neighbors weren’t the least bit happy after a May 19 meeting to review the City of Minneapolis’ current proposed strategy for the land adjacent to Van White Memorial Boulevard where the Minneapolis Impound Lot sits. Jon Wertjes, Director for Traffic & Parking Services for the City presented three options.

The original agreed upon Master Plan developed and approved by the Minneapolis City Council and the Bryn Mawr and Harrison neighborhoods called for the Minneapolis Impound Lot to be permanently moved, creating expanded green space for Bryn Mawr Meadows, improved access roads and passage ways, multifamily residences, and additional economic development options that would tie in with the Southwest Light Rail Transit line.

The first proposal Wertjes presented, “East Concept,” would reduce the impound lot from approximately 26 acres to 16 acres. This option leaves the original Bryn Mawr Meadows as a land-locked parcel which would require a bridge over Bassett Creek along with additional road access. Both sides of Van White would need to be addressed for green/screen soil, power lines, ditch development and the Irving dumpsite.

The second proposal presented, known as the “West Concept,” would reduce the impound lot from approximately 26 acres to 20 acres. A challenge with this option would again be a bridge over Bassett Creek.

The third and final proposal presented, known as the “Split Concept,” reduced the impound lot from 26 acres to 19 acres. This option, too, would require a bridge over Bassett Creek or would need a Van White access. Overall this option appeared to attendees to be the best “worst case scenario.” To Bryn Mawr and Harrison neighborhood residents the “Split Concept” is the closest to the original Master Plan. That plan call for the eventual removal of the Minneapolis Impound Lot.

Community members in attendance overwhelmingly disliked the three options. An accusation was made that the 2013 Minneapolis City Council had abandoned the original redevelopment promise in November of 2013 during the midst of an election cycle, in what would seem like a convenient attempt to redirect budget for bureaucratic gains relating to the Southwest Light Rail Transit line. 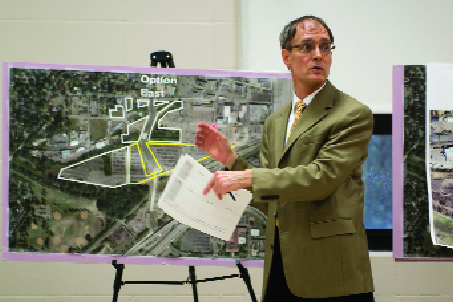 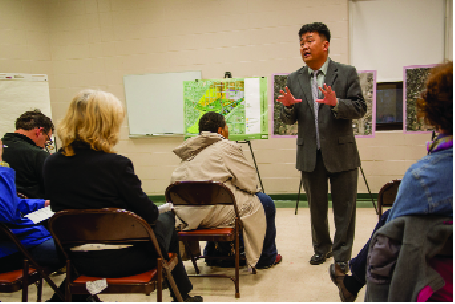 Ideas presented by residents attending included a non-towing method of dealing with parked cars during snow emergencies that would nullify the need for most of the impound lot. The idea has an actual working model implemented in other cities within the State of Minnesota. During a snow emergency cars in the way would be towed to plowed streets. Towed cars would simply incur whatever fines and towing costs necessary via a citation for their violation of city ordinances with regards to city plowing and street cleaning.

Over the years, the neighborhoods of Bryn Mawr and Harrison have struggled to come up with a plan to neutralize or eliminate the impound lot, Glenwood Avenue property owner Pat Carney told NorthNews. “The Minneapolis Master Plan designates the area as a park. It was suggested that the new Vikings stadium could have been built on this space. One intriguing idea is to put solar panels on an elevated grid ten to twelve feet off the ground. This renewable energy grid concept would completely obscure the acreage along with acres of rusted hulks. This grid idea was impossible under previous energy laws, but now that those laws have been changed the Bassett Creek Valley Redevelopment Oversight Committee (ROC) may revisit this idea as a proposal.”

The ROC, a group of neighborhood and business representatives, met the following evening and started to hammer out eight points in response to the May 19 meeting.

Overall the sentiment coming out of the Bryn Mawr and Harrison neighborhoods was a desire to return to the original promise by the City of Minneapolis and to stall, if not entirely prevent, these “makeshift proposal ideas. What was presented to the community ended in nothing short of a unanimous opposition expressing no desire whatsoever to approve, consent, or validate in any way the amended proposal concepts provided to them without any input from the Bryn Mawr and Harrison neighborhoods,” Carney summed up.