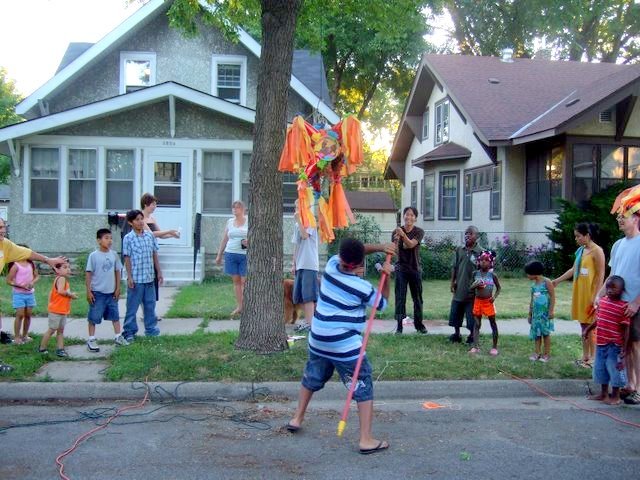 Block parties planned for the evening of Tuesday, August 6

Back in 1979 it was much more difficult to create a paper flyer. Liz Blood, long-time Corcoran resident on the 3500 block of 24th Avenue, has organized annual summer block parties with her neighbors for over three decades. “Before the idea of a National Night Out, we were drawing up flyers with markers for a block picnic and using type writers to request donations from local businesses” shared Mrs. Blood. “People said it would never work.”

National Night Out (NNO) is an annual nationwide event for neighbors to host block parties and get to know their community. The Night Out was established in the mid-1980s as a crime prevention strategy by means of encouraging residents to watch out and take ownership of their local block. Since then, Minneapolis has repeatedly been the top city in country for block parties hosted. This year National Night Out will be on Tuesday, August 6 during the evening hours.

Mrs. Blood has already readied flyers to promote this year’s party by making free photocopies available at Corcoran Neighborhood Organization’s office upon request. Gerry Tyrrell on the 3200 block of Longfellow Avenue has in previous years hoisted a piñata on a street tree and filled buckets full of water balloons for the children in attendance to enjoy. “It is a wonderful feeling to provide the kids of our block with a sense of safety and community,” said Tyrrell. “They absolutely love the street being blocked off and the freedom to ride their bikes around.” Residents can apply to the City of Minneapolis to close the street or alley on their block for NNO.

“One of the keys to success is consistency,” shared Tyrell. “After many years of having a party everyone knows that there will be one and that they should participate.” On a pervious Monday evening, Tyrrell hosted several neighbors at his home for a meeting to plan for the upcoming August 6 block party. “Planning for this year’s event has been very positive. A number of new neighbors are getting involved, bringing their ideas and energy to the block!” stated Tyrell. “One of the ideas is to have a target competition with water balloons and a giant slingshot aimed at a chalk target on the street!” Neighbors who live across the alleys on both Cedar Ave and 19th Ave South are invited to join the Longfellow Avenue party.

Jim and Marie Walsh up the street on the 3400 block of Longfellow Avenue will use their backyard to host the block’s NNO. “Marie and I will provide a grill and hot dogs and buns, neighbors will bring fruits and veggies,” shared Jim Walsh. “Neighbors will bring their own plates and cups, we will provide flatware and cloth napkins. We want our event to be a ‘zero waste’ affair.”

Hosting a National Night Out has larger impact than just crime prevention for the community. Crime Prevention Specialist with the Minneapolis Police Department, Karen Notsch, stated that building a stronger community environment where neighbors know, respect and care for each other is the principal benefit of NNO. Gerry Tyrell agrees. “Having fun and getting to know those who live in the neighborhood has been important to in terms of having a more positive connection when tensions have arisen between neighbors. We continue to try to figure out ways to bridge language and cultural gaps, but generally having a fiesta is a pretty universally understood and a positive experience.”