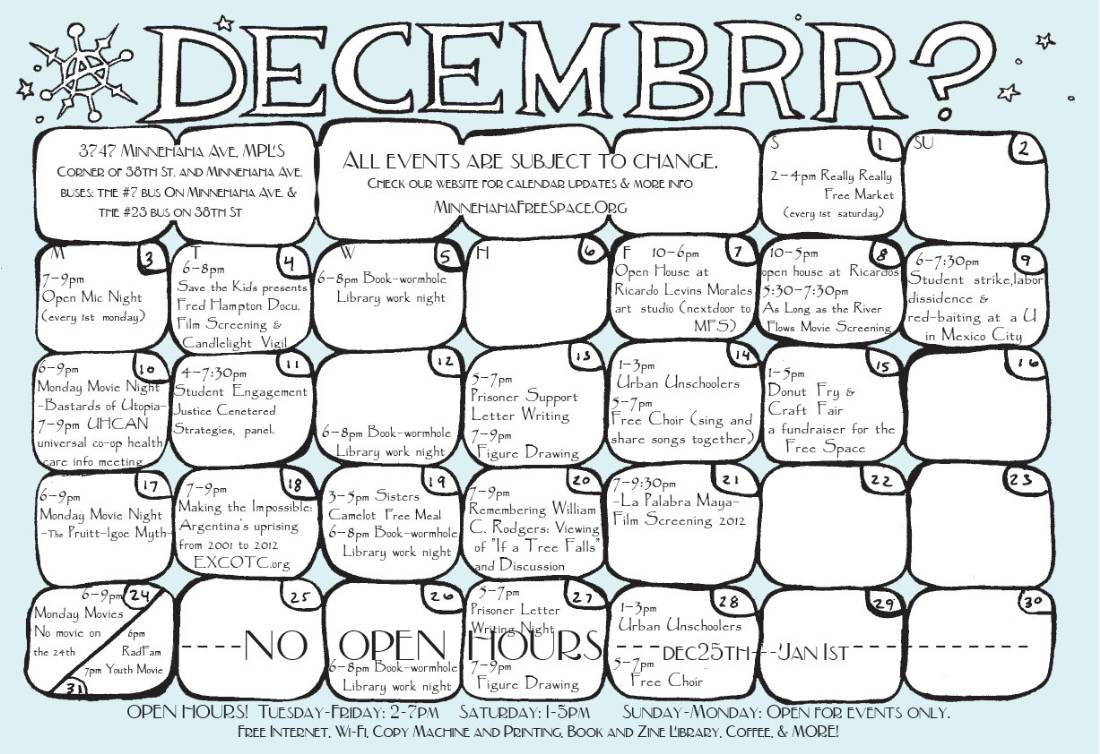 Open Mic Night is returning to the Minnehaha Free Space!! A chance for folks to show off their music, poetry, writing, movement, art, and expression.

POTLUCK DINNER served at 7pm
OPEN MIC sign up at 7:30pm, performances at 8

this is a free event, but please bring potluck items or donations for food & use of the space! no one will be turned away for lack of funds.

this is a sober event. no drugs, alcohol, or intoxication will be needed.

Come and join us for an evening honoring Fred Hampton, NAACP activist and deputy chairman of the Illinois chapter of the Black Panther Party. Hampton was assassinated on December 4th, 1969, during a raid on his home organized by the Illinois State Attorney’s Office, the Chicago Police Department and the Federal Bureau of Investigation. We will be screening the 1971 documentary The Murder of Fred Hampton, which will be foll-

owed by a community discussion and a candlelight vigil.

Twin Cities Save the Kids
www.savethekidsgroup.org

“Utah Phillips (May 15, 1935 – May 23, 2008) was a labor organizer, folk singer, storyteller, poet and the “Golden Voice of the Great Southwest”. He described the struggles of labor unions and the power of direct action, self-identifying as an anarchist. He often promoted the Industrial Workers of the World in his music, actions, and words.”

As Long As the River Flows Documentary Screening

In celebration of 10 years of resistance by the Grassy Narrows Community in Northern Ontario, and as follow up to our recent screening of Dakota 38 and subsequent conversations, we will gather and watch the documentary As Long As the River Flows.

In December 2002, a small group of teenagers from Grassy Narrows First Nation started laying down in front of logging trucks. The youth have since led their community into what has become the longest standing blockade in Canadian history. Dave Clement spent many days on the blockade documenting a story that was being ignored by the mainstream media. This film examines the issues surrounding the practice of clear cutting and looks at what brings people to engage in direct action. It takes a look at the issues from the perspective of those who live on the land giving the viewer a look at the issues through their eyes.

This event is FREE, with donations collected for the Free Space and indigenous resistance projects.

Student strike, labor dissidence, and red-baiting at an alternative university in Mexico City – 12/9

The only public university in Mexico that doesn’t have an entrance exam
and doesn’t charge is under attack. Students and workers are fighting
back and winning. Students at the Universidad Autónoma de la Ciudad de
México went on strike in late August to oppose the fraud, repression,
and neo-liberal counter-reforms carried out by Esther Orozco, rector
imposed by the ostensibly left-leaning mayor of Mexico City.

Come talk about what similarities there may be between this movement and
similar movements in the U.S. and what this university may have in
common with alternative schools we’re familiar with.

This is a new and regularly scheduled (bi-weekly) event at the free space!
This month you can stop by the space from 5-7pm on Friday the 14th and Friday the 28th.

Come sing and make friends. Bring your voice and songs to share.
Feel free to come and go as you wish!
Hot tea will be available.

Alright! Donuts and Crafts! Just in time for… well, whatever you need donuts and crafts for.

Join us at the Minnehaha Free Space on Saturday, December 15th from 1-5pm for fresh (vegan) donuts. There will be a variety of amazing glazes to choose from as well as toppings (including bacon)!

Donut prices will range and there will be a per donut fee.

Crafts will range in price depending on crafters. A portion of the proceeds from craft sales will be donated to the Free Space.

There will also be a MARS Collective craft table–all proceeds of which will go to the space.

If you are interested in selling crafts, let us know by December 1st.

Invite your friends far and wide! Come check it out for some holiday gifts!

We’ll update the event page with some crafting samples as we know more.

(and invite your friends!)

Have you explored the Free Space library lately? Below are some of our recent additions. Stop by and check out a book this week! You can also search our online catalog to see if we have a certain book, via http://minnehahafreespace.org/library/

Don’t Leave Your Friends Behind: Concrete Ways to Support Families in Social Justice Movements and Communities
by Victoria Law, 2012, PM Press
A collection of suggestions, tips, and narratives on ways everyone can support parents, children, and caregivers involved in social movements, this book focuses on social justice, mutual aid, and collective liberation. One of the few books dealing with community support for issues facing children and families, this reflection on inclusivity in social awareness offers real-life ways to reach out to the families involved in campaigns such as the Occupy Movement. Contributors include the Bay Area Childcare Collective, the London Pro-Feminist Men’s Group, and Mamas of Color Rising.

Paths Toward Utopia: Graphic Explorations of Everyday Anarchism
by Cindy Milstein, Erik Ruin (Illustrator), Josh MacPhee (Introduction), 2012, PM Press
Consisting of ten collaborative picture-essays that weave Cindy Milstein’s poetic words within Erik Ruin’s intricate yet bold paper-cut and scratch-board images, Paths toward Utopia suggests some of the here-and-now practices that prefigure, however imperfectly, the self-organization that would be commonplace in an egalitarian society. The book mines what we do in our daily lives for the already-existent gems of a freer future—premised on anarchistic ethics like cooperation and direct democracy.

Books and Islands in Ojibwe Country: Traveling Through the Land of my Ancestors
by Louise Erdrich, 2006, National Geographic
In a small boat like those her Native American ancestors have used for countless generations, Minneapolis-based author Louise Erdrich travels to Ojibwe home ground, the islands of Lake of the Woods in southern Ontario. Her only companions are her new baby and the baby’s father, an Ojibwe spiritual leader, on a pilgrimage to the sacred rock paintings their people have venerated for centuries as mystical “teaching and dream guides,” and where even today Ojibwe leave offerings of tobacco in token of their power.

Revolution at Point Zero: Housework, Reproduction, and Feminist Struggle
by Silvia Federici, 2012, PM Press
Written between 1974 and the present, Revolution at Point Zero collects forty years of research and theorizing on the nature of housework, social reproduction, and women’s struggles on this terrain—to escape it, to better its conditions, to reconstruct it in ways that provide an alternative to capitalist relations.
—
The Minnehaha Free Space–3747 Minnehaha Avenue, Minneapolis MN
presented by the Minneapolis Autonomous Radical Space (MARS) Collective