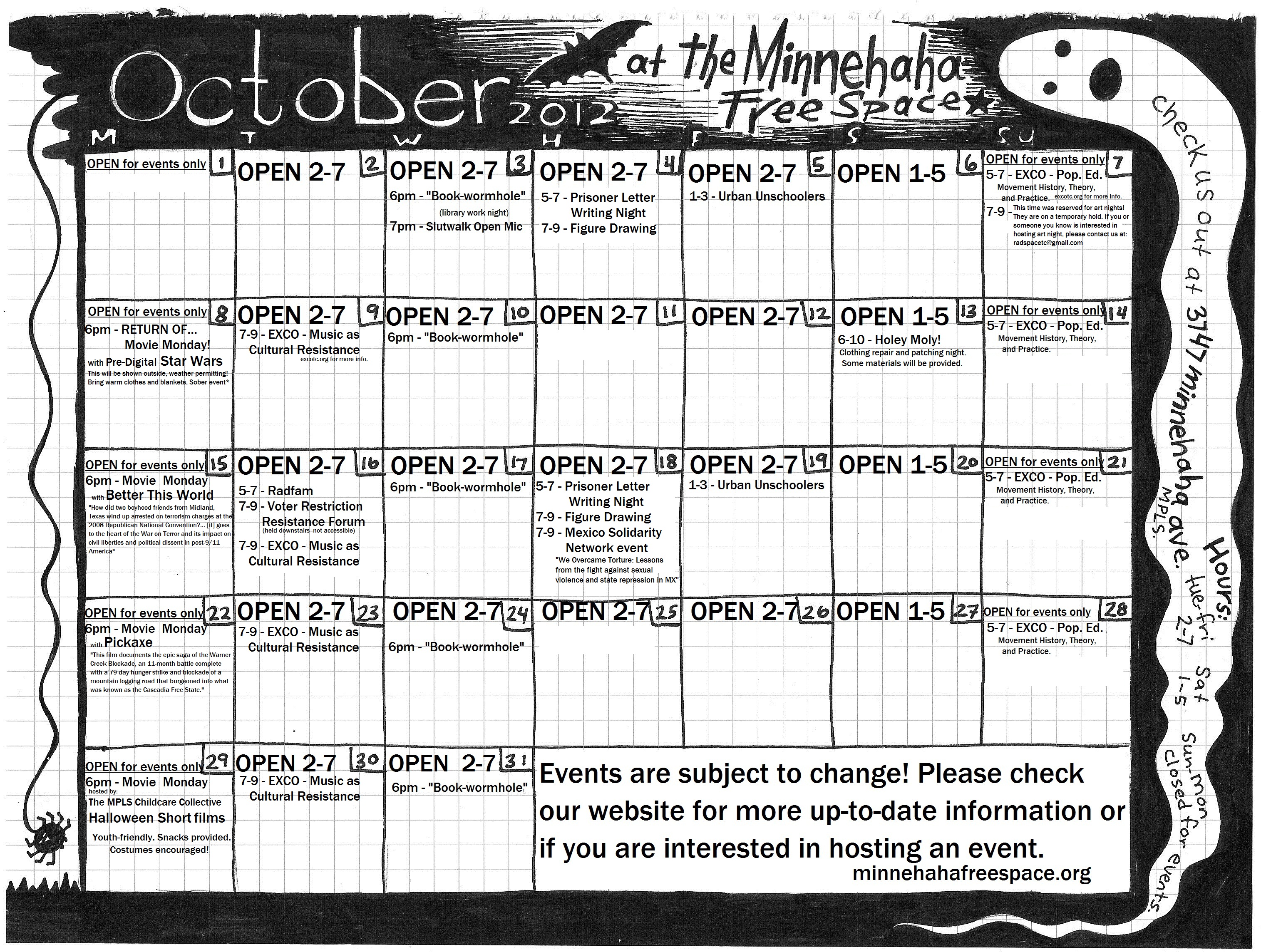 We are pleased to announce the very popular Open Mic Night for survivors and their supporters has been scheduled for Wednesday, October 3rd at Minnehaha Free Space. We will begin at 7 pm and run until 10 pm that evening.

Open Mic night is a safe, supportive atmosphere for people to perform poetry, prose, music or whatever moves them. We will not tolerate anyone who doesn’t understand and support what SlutWalk Minneapolis stands for.

Our merchandise will be available for CASH purchase that night and we’ll have hoodies and t shirts available!

We look forward to seeing you that evening and it will be a great night of togetherness.

Volunteer for SlutWalk Minneapolis this Saturday October 6th! Contact us at slutwalkminneapolis+volunteers@gmail.com.
Your help would be greatly appreciated!

The Minneapolis Child Care Collective will be hosting one movie a month. If you are (individually or as an organization) are interested in hosting a movie, just send us a message on facebook or e-mail us at radspacetc@gmail.com and will be in touch with you. Additionally, if you are a local film maker or documentarian and are interested in hosting a screening of your film, feel free to contact us.

There will always be some popcorn, coffee, and tea. Feel free to bring other snacks to share.

This will be shown outside in our back parking lot, weather permitting. Bring warm clothes and blankets.

“How did two boyhood friends from Midland, Texas wind up arrested on terrorism charges at the 2008 Republican National Convention? Better This World follows the journey of David McKay (22) and Bradley Crowder (23) from political neophytes to accused domestic terrorists. A dramatic story of idealism, loyalty, crime and betrayal, Better This World goes to the heart of the War on Terror and its impact on civil liberties and political dissent in post-9/11 America.”

“…documents the epic saga of the Warner Creek Blockade, an 11-month battle complete with a 79-day hunger strike and blockade of a mountain logging road that burgeoned into what was known as the Cascadia Free State. Warner Creek is a federally protected forest along the western slopes of the Cascade range in Oregon. Following a suspicious fire in 1991 that cleared the land, Congress suspended environmental regulations to allow logging. This inspiring documentary shows the power of direct action and determination.”

an interactive discussion with:

Minnesota’s voter restriction amendment would make it difficult for hundreds of thousands of Minnesotans to vote – students, seniors, people living in poverty, people of color, and anyone without easy access to a current ID.

How does the voter restriction amendment fit in to the bigger picture of racialized voter suppression as a strategy for right-wing, corporate control?

For those of us who create change primarily outside electoral politics, what is the significance of voter restriction for our many social justice struggles?

With the same-sex marriage amendment also on the ballot, what strategic choices help or hurt our chances for building long-term power for our communities?

And: How do we mobilize to defeat the amendments and build for the long haul?

*(this event will be held in our basement hall, which unfortunately is not wheelchair accessible.)

The Free Space Library bookworms have been hard at work! Our zine and book collections have been neatly sorted and alphabetized for easy browsing and searching… and we have a new comfy chair in the library, too.

Visit the library and check out our new recommendations board for suggestions, or make a recommendation yourself. We’ve also been getting some great new books. Here are some of the latest additions to the library waiting for you to check them out:

What Lies Beneath the Clock Tower: Being An Adventure Of Your Own Choosing
Margaret Killjoy – Combustion Books, 2011
An interactive novel of danger, drugs, and revolution. Descend into the depths of the undercity and embroil yourself in the political struggling of colonialist gnomes and indigenous goblins. Fly in air balloons, drink mysterious and pleasant cocktails, smoke opium with the dregs of gnomish society. Or dream and speak of liberation for all the races. Fall in love and abscond into the caverns.

Robert H.Haworth – PM Press, 2012
Important and challenging issues in the area of anarchism and education are presented in this history of egalitarian and free-school practices – from Francisco Ferrer’s modern schools in Spain and the Work People’s College in the United States, to contemporary actions in developing “free skools” in the United Kingdom and Canada.

We, the Children of Cats

Tomoyuki Hoshino – PM Press, 2012
A series of provocative stories: A man and woman find their genders and sexualities brought radically into question when their bodies sprout new parts, seemingly out of thin air…. A man travels from Japan to Latin America in search of revolutionary purpose and finds much more than he bargains for…. Two young killers, exiled from Japan, find a new beginning as resistance fighters in Peru.

Resource Manual for a Living Revolution

New Society Publishers, 1985
An all time favourite of activist educators. Nicknamed “the Monster Manual,” this trainers’ manual made a big impact in all sorts of social change movements during the 1970s and 1980s. It remains one of the best sources for trainers working around facilitation, decision making and group maintenance. You can find it and many other great activist resources, old and new, in our Activist & Organizing Tools section!