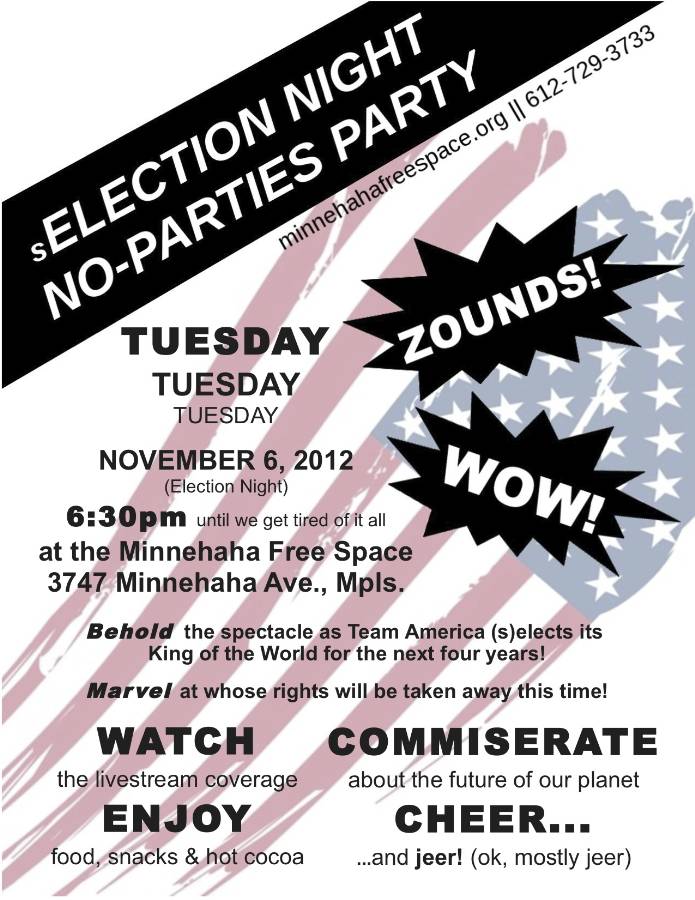 Do you like to draw? Come join others to draw with a community of others who also love drawing. There will be a model who will pose for the group to draw together.

The Twin Cities-based coalition called Minnesota=Rights is calling on all groups and individuals opposing the Minnesota Marriage Amendment and the Minnesota Voter ID Amendment to attend a teach-in to be held on the Saturday before election day!

At the polls this November, Minnesotans are being asked to enshrine in our state constitution the second-class citizenship of our friends, families and neighbors in two ways: by denying the right to marry to same-sex couples and by requiring voters to present valid

photo ID in order to vote–a measure which has been shown to dramatically reduce the ability of black and latino voters, students, the elderly and the poor to vote. These two amendments–the Minnesota Marriage Amendment and the Minnesota Voter Identification Amendment (2012)–are part of a national Right Wing push against the 99%. They seek to marginalize traditionally left-leaning demographics and disenfranchise groups that oppose their agenda.

“The case against Voter ID”

“Fighting back against the Marriage Amendment”

“Standing up to oppression: How Voter ID and the Marriage Amendment are linked”

We cannot allow Minnesota to follow the same path that many other states have gone down by taking away the rights of our neighbors. We must stand united against the Right and draw a line in the sand for workers and families!

Behold the spectacle as Team America (s)elects its King of the World for the next four years!

Marvel at whose rights will be taken away this time!

COMMISERATE
about the future of our planet

“Why we’re voting no and you should too”: A statement by the MARS Collective

The way we, the MARS Collective, have chosen to help create the world we want to see is outside electoral politics; we value self-determination, mutual aid, direct action, and autonomous community control. Voting for the specific ways in which our dignity will be taken away—whether by referenda or by politicians whose lives are utterly different than our own—is not a political system we see as legitimate.

Nonetheless, we view the proposed constitutional amendment of Voter ID/Voter Restriction here in MN as crucial to our struggles. Voter suppression, of which photo ID is just the latest tool, is a strategy devised by right-wing groups, especially the American Legislative Exchange Council (ALEC), to strip away the dignity of marginalized communities (particularly people of color, immigrants, the poor, students, and the elderly) and to demoralize us and prevent us from organizing. It’s not that we see the electoral system as working and that this shift would break it, but rather we see this system as already a mechanism of exclusion and domination—such as with the disenfranchisement of undocumented immigrants and of felons in most states—and this amendment would be an expansion of such forms of oppression.

Voter suppression robs communities of their dignity. Whether or not we believe in the power of the vote, this amendment would take away even the choice of whether or not to participate on election day for hundreds of thousands of people in Minnesota. If passed, it would help the worst of the worst politicians get elected—making us spend more time fighting defensively for our basic needs like food stamps, reproductive health care, and affordable housing, rather than fighting for the radical, systemic change we really want.

Please take the time to VOTE NO (on both amendments) on November 6th. Talk to your friends & neighbors and ask them to do the same.

– video testimonies of people from different communities, talking about how this amendment would negatively affect them.

Volunteer to Door Knock to Defeat the Voter Restriction Amendment – with Neighborhoods Organizing for Change – http://www.mnnoc.org/volunteer_calendar

“The Marriage Amendment as decoy and how to fight the real danger” by Ricardo Levins Morales – https://www.tcdailyplanet.net/blog/ricardo-m-levins-morales/marriage-amendment-decoy-and-how-fight-real-danger
—
presented by the Minneapolis Autonomous Radical Space (MARS) Collective