This University neighborhood biker felt safe locking a bike to one of Minneapolis’s new stick-like parking meter space markers—would you? It wouldn’t be hard to slip a U-lock off one of those, which is why the Minneapolis Bicycle Coalition is partnering with the City of Minneapolis to raise funds to turn those meter markers into proper bike-parking spaces. (Disclosure: I serve on the Coalition’s board.)

The way it’s done is by installing a metal “sleeve” that slips over the meter pole and allows space for a bicycle to be locked on each side of the pole. “The city did budget for these this year,” writes Susan Priem of the Minneapolis Bicycle Coalition in an e-mail. “My understanding [is that] it was on a trial basis with 60 meters, being cautious in trying out a new program. The MBC approached the city to partner with them to increase that number.”

The cost of each sleeve is $100, and the city agreed to pay half the cost of each sleeve that the Coalition raised $50 to fund. The first push focused on Uptown, and orders are now in for 80 sleeves in that area of the city. The Coalition is now seeking funds to add sleeves in the heavily-biked University District neighorhoods. “The city planned to start in Uptown and then to the West Bank and downtown areas,” writes Priem. “MBC has convinced them to include the Dinkytown and Stadium Village areas as well.”

To fully or partially fund a bike parking sleeve on your favorite (?) meter pole, you can donate and specify the pole number via the Coalition’s website. The result: a safer place to park. 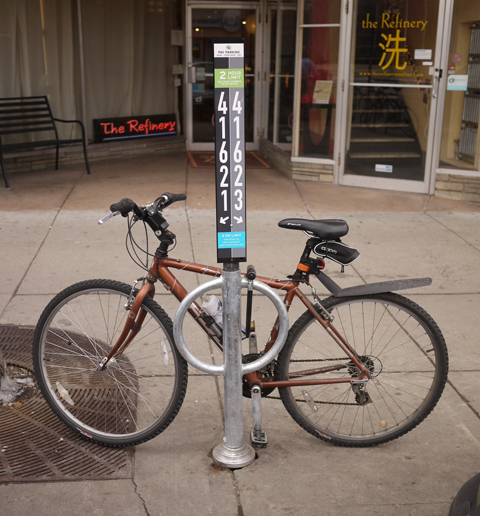