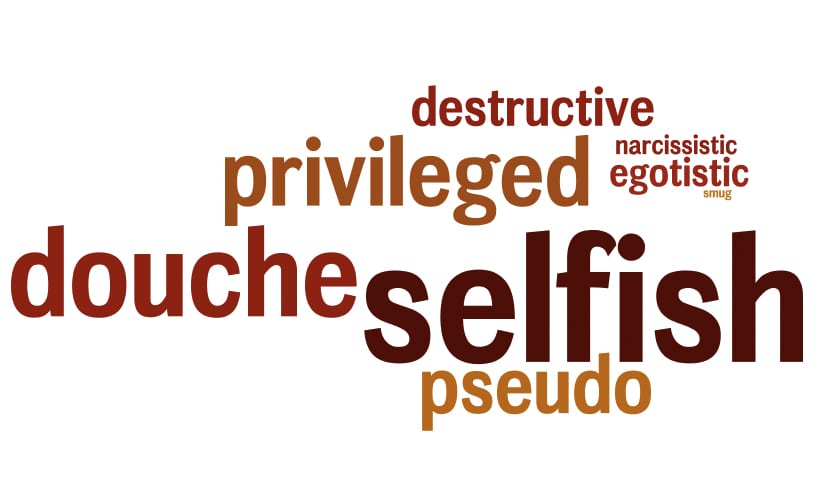 I mean, obviously, right? At least, according to commenters.

Experienced journalists know better than to look to the comment sections of news articles for insightful commentary on the articles’ content, but of course we can’t resist reading comments on our pieces, and thinking about them. Those of us who write critical reviews have also learned that publishing a negative review will attract commenters who accuse us of having the basest motives for our writing. My friend Jay Boller just published an unenthusiastic review of the new White Light Riot album on The Onion’s local A.V. Club site, and was quickly called “a destructive force,” “pompous,” and “obnoxious.” Jay is told to “grow up” and to “do something to help the local scene.” One commenter suggests that Jay has an “intense desire to be hired by the likes of Pitchfork.”

I know how it is. Here are a few things commenters on the Daily Planet have had to say about me:

“Your review tells the tale of two worlds – yours and theirs. Yours as illustrated by the powerful position of being a privileged word smith who is a make or break public opinion influence, a by product of Coca Cola civilization. Yes, your write up can extend or shut down an international tour for those that use computer based research and get halted by your privileged and I hasten, to say selfish power base write ups such as this one.” (“BLK JKS play for adoring fans, and also the other two-thirds of the audience, at the Cedar”)

“Critics love to decimate others efforts to be creative by pretending to be the ‘one all know all of creativity’. Excuse me, but you are not. Drop the ego, sit back and enjoy others efforts. You just might learn somthing, unless you really are too into yourself.” (“At the Guthrie Theater, Heaven is a place where entirely too much happens”)

“My comments our based on you as a reviewer and not on a personal level, but in your writing you come across as a major pseudo intellectual douche. The final paragraph of your review is telling. Your review comes across being less about the theatre than you just wanting to hear yourself. Are you writing reviews for your reading audience or just to impress yourself with your whit?” (“Blast Theory’s A Machine to See With: Monkey see, monkey do”)

“This probably has to go down in the books as the douchiest review I’ve ever read in my life. I can’t remember if you even talked about the performance or if this was just 5 paragraphs of you talking about how amazing you think you are. Between the ‘quotes’ of things other peope said about you and the name-dropping and your self-indulgent posing over your own fantastic ideas, you lost all credibility. I don’t even have any real interest in seeing the performance…I just can’t believe that you only used it as a platform to tell people how great you think you are.” (ibid)

Ironically, the last two commenters seemed to be particularly vexed by the fact that, in the review on which they were commenting, I quoted a critical e-mail I’d received in response to a previous review: “That’s a pretty egotistic stand to take…that a few quick thoughts you had while watching—the places where you wanted it to be ‘pushed’ (implying more artistic courage, of course!)—are the difference between it being a so-so at best piece of theater for the masses, and the awesome version you wrote, in a parallel universe—for smarter, cooler people like yourself.”

I’ve also blogged about a critical e-mail I received in response to a negative review of Workhaus Collective’s Little Eyes, so I’ve not been unreflective about why and how I write critical reviews—but Jay’s chagrined Facebook post about the negative comments on his White Light Riot review inspired me to return to the subject.

Comments like this are to be expected. Mothers say that if you can’t say anything nice, don’t say anything at all—so those of us who go publicly on record saying less-than-nice things about records and shows are in clear violation of a strong social norm. Plus, what did White Light Riot or BLK JKS ever do to us? It’s not like they’re warmongers or thieves. They’re just putting on shows, so why we gotta hate?

The reason, obviously, is that we care about what they do, and we care about seeing and hearing it done well. What really stings about comments like these is the totally misguided suggestion that we’re somehow trying to get ahead in life—to make money, or to impress people—by stomping on innocent performing artists. Like Jay gets up in the morning and thinks, “Well, I really don’t want to trash White Light Riot, but my girlfriend’s going to leave me and Pitchfork’s going to ignore me unless I write something really resoundingly negative about some local band today. So sorry, guys–it’s you or me!”

Arts journalism is not a particularly remunerative career. I guess there is a certain prestige to it, but what impresses people in the long run—as with any form of writing—is not negativity but honesty and authenticity. Now you know how Jay feels about the kind of music White Light Riot make, and if you love that stuff, you know that Jay is probably not your go-to guy for music criticism. If you agree with him, though, you appreciate that you can count on him to shoot straight with you, and not to be afraid to entertain you while he’s doing so.

I’ve heard theater artists talk about critics, and though it’s never comfortable to have your own show panned, no one respects a critic who’s all sunshiney-day either. It’s a service to the public, and ultimately to the art, to communicate honestly and entertainingly about the shows you see. If you don’t like a negative review I write, I am sorry that you lost those three minutes of your life, but I sat there for three hours watching that crap.

The playwright who complained about me comparing his show negatively to “the awesome version” I wrote “in a parallel universe” has a point: I’m not writing plays or making records, so what gives me the right to criticize others? There’s certainly a special insight that an artist can bring to writing about the work of others—for example, our theater critic Matthew Everett is a playwright himself—but being involved in artistic production also burdens you with friendships and conflicts of interest that make it very difficult to write objectively and honestly about the work. Critics have the luxury of distance. (I do sometimes write about my friends’ work, and I let my readers know when I have a personal friendship with an artist I’m covering.)

Ideally, a critic is someone who loves theater, or music, or whatever he or she is writing about so much that he or she can’t conscionably support shows or albums or books that disappoint—when there’s so, so much out there that doesn’t. Ideally, a critical review can not only inform the public but even become a part of the artistic process. One of the greatest moments of my career as an arts journalist came when a playwright I deeply respect wrote to me saying, “I learn something new about my work every time I read one of your reviews of it.”