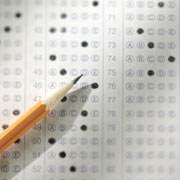 Minnesota got word today that barely half of its schools are making Adequate Yearly Progress (AYP) according to the standards of No Child Left Behind. Two reactions are completely understandable right now. One is a concern for the schools labeled, often unjustly, as failing. The second is an almost total lack of surprise.

My heart goes out to the schools that just got called losers by the federal government. Some of these schools are honestly struggling, but I’ll bet X to Y that they already knew that. Many other schools aren’t actually struggling; some of them may just have failed to grow their test scores from already high rates of proficiency.

This is where the lack of surprise comes in. See, we knew NCLB would eventually end up labeling nearly every school in Minnesota a failure.

Unlike some states that rewrote their state standards and tests to make it easier for students to qualify as “proficient,” Minnesota continues to set higher relative expectations for its students in the math and reading measures that count for AYP determination.

As we approach the 2014 deadline for universal student “proficiency,” and as schools performing at high levels struggle to move from, say, 94% proficiency to 100% proficiency, more and more schools will be caught in the AYP trap.

In the early years of NCLB, failure to make AYP could be a genuine cause for alarm since the program didn’t require high levels of achievement and most schools could find ways to jump a selected group of “bubble students” a little farther forward on the state tests. Now that we’re in the closing phases, everyone’s at risk of getting labeled a loser.

On the one hand, failure to make AYP has become a policy joke, given its predictability (some would say inevitability). On the other hand, persistently failing to make AYP automatically triggers consequences for a school; the joke comes with a melancholy punch line.

Now, Minnesota has applied for a waiver from NCLB’s requirements, and we should hear back on that in a couple of months. At the same time, the waiver isn’t exactly a “Get Out of Jail Free” card. The Obama administration has made waivers contingent on certain policies, and they still expect students to be meeting standards for “college and career readiness” by 2020.