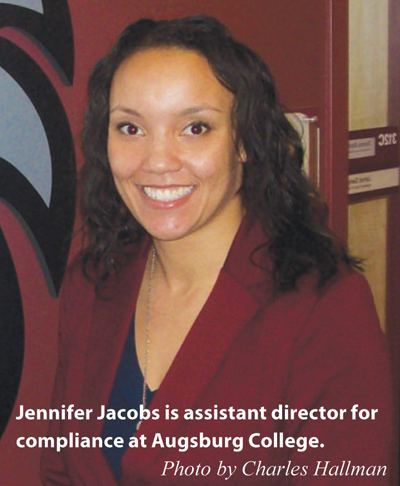 Jennifer Jacobs is among the few Black females in the Twin Cities currently working in athletic administration. She is finding it “a perfect fit” for her.

Jacobs, a St. Paul native, was named assistant director for compliance at Augsburg College in Minneapolis last summer as part of a two-year NCAA Division III Ethnic Minority and Women’s Internship Grant program. The two-year grant is designated for Division III institutions to hire full-time interns. The grant will cover salary and professional development activities, and the institution must provide “an additional in-kind contribution” to help with the intern’s personal living expenses.

“[It] is truly one of the top internship programs in college athletics,” says Augsburg Assistant Athletic Director Kelly Anderson Diercks, who herself was a program intern (2006-08). “Augsburg’s decision to apply for this program was twofold. First, we felt that we could give an intern a top-quality experience, with structuring our job description to be coaching volleyball and administration/compliance. Secondly, we are strong believers in the value that diversity brings to the workplace, higher education and athletics, and [we] know that the addition of women and minorities to our athletic staff will enhance the experience we are able to give Augsburg student-athletes.”

After playing volleyball and graduating at Minnesota State-Mankato with a psychology degree, and a one-year stint as an assistant volleyball coach at her alma mater in 2004, “I knew I wanted to work in schools,” admits Jacobs, who adds, “I didn’t have a plan.”

Her first administrative job was at St. Paul Harding High School where a school counselor helped her land a job as a special education paraprofessional, and she worked with a new career planning program that just started there.

“It was a naturally good fit” for her working in the career planning center for two years, believes Jacobs, who earned her master’s degree in educational administration at St. Mary’s University in 2009 and is currently studying there to earn a K-12 principal license certification.

A local school administrator later advised her to pursue administration as a career because the field needs more Blacks. That advice led her to Richfield High School where she was hired as the African American outreach liaison for three years.

“I [then] started looking for jobs, and the Augsburg job opened last fall,” says Jacobs. “College always has been in the back of my mind, and now I’ve had some administrative experience. I applied and was lucky to get it. The Augsburg job is a perfect fit.”

You wear several hats, which is common at a Division III school such as Augsburg, explains Jacobs, who also is the school’s assistant volleyball coach. “That is true across the board,” she notes. “You are the head soccer coach and the financial athletic person. You are the assistant softball coach…and [you do] academic advising. The work is spread around many, but it is more collaborative.

“I would say my biggest learning curve is that at Division III you could be doing 15 different things as opposed to two or three,” she surmises. “Because Division III [schools are] typically smaller campuses, there is a lot more cross-departmental talk. In athletics, there is a lot of constant communication. That is nice here.”

She loves her job at Augsburg. “It’s cool to learn [that] there are so many endeavors on campus,” she admits.

Anderson Diercks says, “Jennifer has done a great job thus far in her time at Augsburg College. She is a taskmaster who holds herself and those around her to high standards. She spent the majority of her fall semester working closely with the volleyball program, both coaching and recruiting. We are very excited for her to dive into more of the administrative side of her duties this spring and really see her blossoming in that area of her work.” Jacobs is one of 13 U.S. recipients of the two-year NCAA grant.

“It is aimed to get more women of color involved in athletic administration,” explains Jacobs. “At all [NCAA] levels, but especially at the Division III level, women are leaving the profession at a certain age because the demands for the work/life balance is so hard that women are literally leaving coaching and administration because they feel like trying to balance…having a family and doing the job is not working.”

She, however, hopes to avoid those pitfalls: “I have to prioritize what I am doing and what’s most important. I think the big learning curve for me in the past four years has been [that] I don’t have to do every single thing at the highest ability all the time,” says Jacobs. “You can’t do everything like that. Part of it is delegation and part of it is people [having] around…doing a very good job.”

Also the numbers of Black women administrators are low as well. There are currently no Black women college athletic directors. “You have to actively” recruit Blacks if these numbers are to ever increase, she adds. “People of color are underrepresented in every single [area].

“Division III is doing a very good job [to] actively recruit and retain [Blacks],” says Jacobs. “It is really working to get women of color involved at the higher level of administration.”

“We believe in this program and are confident that at the end of the two-year program, Jennifer will have the skills and experience to secure a full-time position in college athletics,” surmises Anderson Diercks.

Jacobs says that by the time her internship ends in May 2014, she will be ready to tackle any job in athletic administration. “I’m hoping to end up in athletics administration somewhere.” she says.