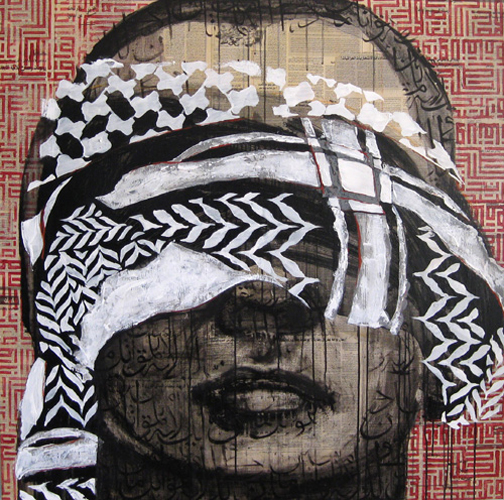 Artists from Iraq and the United States using images to find healing from the emotional wounds of the Iraq War will be featured in an upcoming exhibition called Navigating the Aftermath at the University of Minnesota’s Quarter Gallery in Minneapolis. Through art, film, and special events, the artists—including anti-war activists, Iraq war veterans, and Iraqi artists—explore how we exist after experiencing the devastations of war.

The show is sponsored by the Iraqi and American Reconciliation Project (IARP) in Minneapolis and the Muslim Peacemaker Teams (MPT) in Najaf. According to its website, IARP, which was established as a nonprofit organization in 2007, aims “to promote reconciliation between the people of the United States and Iraq.” They have been involved in such projects as sending water filters to schools in Najaf, and bringing artwork from Iraq to Minneapolis to be shown at coffee shops, community centers, and other public locations.

IARP and MPT also were responsible for a show at Tarnish and Gold last summer called The Art of Conflict.  That show asked viewers to question their own feelings and thoughts about the war, and aimed to facilitate intercultural dialogue.

Tricia Khutoretsky, who curated both the Art of Conflict show and Navigating the Aftermath, wrote in an e-mail that IARP didn’t know what to expect when they were putting together the Art of Conflict exhibition, and were overwhelmed with the response. “We had so many people who were truly concerned about understanding the effects of the Iraq war,” she wrote. “The Art of Conflict ended and the audience seemed to ask, what’s next? We thought it was enough [interest] to warrant further exploration of art as a way to encourage people to understand the situation in Iraq.”

Khutoretsky said that the organizers were informed from the previous exhibition that the audience wanted more of an opportunity to engage with the artists, which didn’t happen formally because the artists coming from Iraq were delayed. For Navigating the Aftermath, there will be more opportunities for discussion, including an artist-centric opening reception. On February 18, when the show opens, there will be a discussion with the artists in the InFLux room at the Regis Center next to the gallery space, and will have one of the Iraqi artists call in via video Skype. There will also be another event with Iraqi music and opportunities to hear from the Minnesota artists on February 25 from 6-8, and there will be a panel discussion on March 4, co-sponsored by the Minnesota international Center where Iraqi and American voices will discuss the political and cultural effects of the Iraq War on both countries, according to a press release.

Thematically, Navigating the Aftermath is similar to The Art of Conflict in that Iraqi and American perspectives on the war will be presented, Khutoretsky said. However, the current exhibition is more specific in that most of the artists have been personally affected by the war. “The Iraqi artists deal with identity, what has happened to their country, and how to transcend it or make sense of it, Khutoretsky wrote. “The American artists are war activists, or veterans who have continued to work as professional artists after their time in Iraq.” While she considers the current exhibition a continuation of The Art of Conflict, “we are delving deeper,” she wrote. The exhibition probes the question “How do we exist after experiencing something like that?” Artists have been chosen who have ongoing projects or are involved regularly in bringing light to the effects of the Iraq war.

One of the artists in the exhibit is Aaron McLeod, an Iraq war veteran. In the Art of Conflict show, he presented photo-journalistic portraits; in this show, he is presenting mostly intaglio prints he created after returning home. The prints create a fusion of handmade and mechanical sensibilities, which conceptually “reinforces the idea of effective visual rhetoric and propaganda as a consequence of reproduction,” McLeod said. He’s playing, with the prints, with the idea of a message being repeated until it becomes the truth.

McLeod said that when he returned to the United States, he added studio art as his major at the University of Minnesota, Duluth, where he also majored in graphic design and minored in photography. McLeod said that when he came back, all of his art focused on the war. He was always gravitating toward that subject, he said. “I guess just being over there for a year and then coming back—it changes your world view.” McLeod still uses his experience in Iraq as fodder for his work, though he says now he’s not sure where to go with it.

McLeod was disappointed during The Art of Conflict because he didn’t have a chance to have much of an exchange with the other artists.  He had brought a print he had wanted to give to one of the Iraqi artists, but because they were delayed, he wasn’t able to give it.

Another artist in the show, Jane Powers, is an anti-war activist whose work was shown in The Art of Conflict and who also helped organize the current exhibition. Powers had a very positive experience with the last show. The response she received from people was that they really appreciated being able to look at the issues not just through words in media but through images and metaphor. “It brought the whole conflict into a more personal connection for them,” she said.

Powers said she was fortunate in that she was able to organize a gathering at the Walker to have the Iraqi artists meet other artists in the Twin Cities. “It was really fantastic,” she said.

The focus of Navigating the Aftermath, she said, takes a critical shift away from looking at conflict into a discussion of what happens during a period of withdrawal. “The focus is to bring in some discussion of, what now? Where are we now?” As part of the committee organizing the current exhibition, Powers suggested a table piece that would be similar to one found in an Iraqi home, where people could write on the table, and add their own thoughts. “We’re looking at opportunities for people to have conversations in the space but leave some of their own voice,” she said.

The other artists in the show include local artists Camille Gage, Monica Haller, and Megan Rye.  There will also be work shown by Iraqi artists living in North America—Ayad Alkadhi, Susu Attar, and Sundus Abdul Hadi—as well as work by Iraq-based artists Reben Majeed and Jamal Penjweny. American artists Jesse Albrecht and Jim Lommasson will also be presented. Following the show in Minneapolis, the exhibition will then travel to various cities throughout Minnesota.