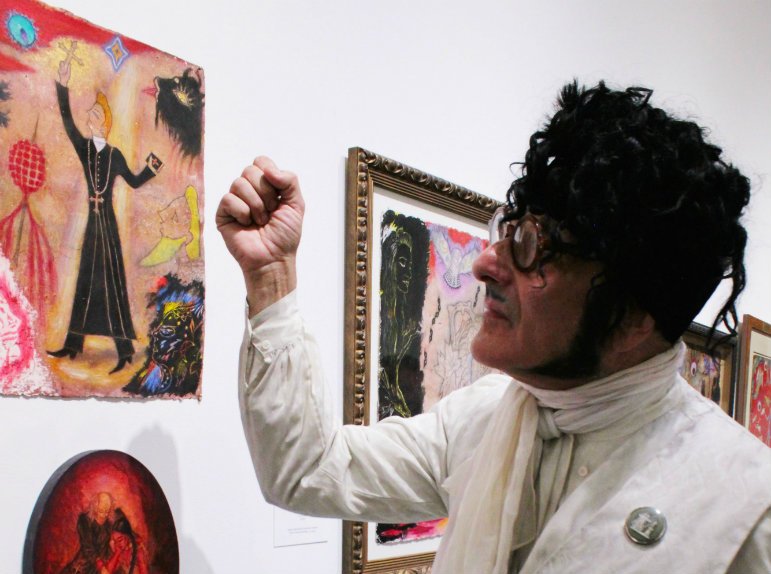 Scott Seekins in front of his artwork. Photo by Nikki Rykhus.

“If Scott Seekins had taken photos of Auschwitz and inserted himself into those photos, I can’t even imagine the moral outrage,” said Anishinaabe artist and activist Ashley Fairbanks. “This is art about genocide.”

Inside the crowded Douglas Flanders & Associates gallery on May 14, one of Minneapolis’ most recognizable artists, Scott Seekins, opened his exhibit “The New Eden,” a collection of paintings and drawings depicting the 1862 U.S.-Dakota War. Many of the pieces seem to mimic Plains Indian art forms, including work created on ledger paper. 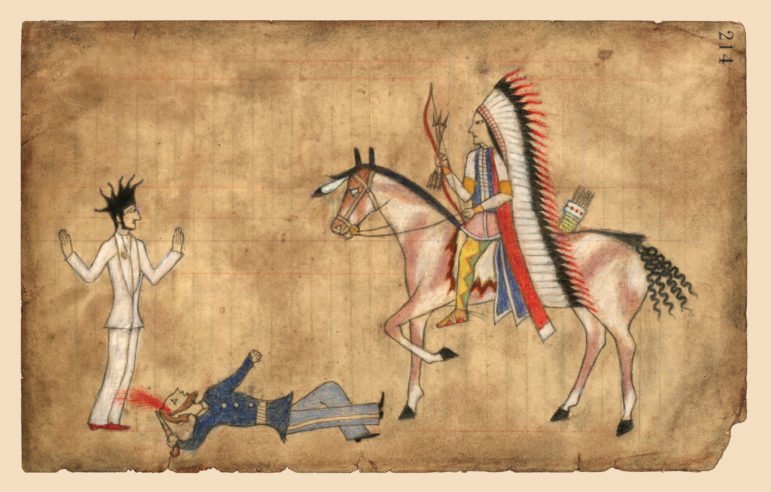 Images of Seekins himself appear throughout the collection, which is typical of his work. But when Seekins, a white man, paints himself next to Britney Spears — which he did throughout the 2000s — it’s different than inserting himself into cultural work dealing with genocide and oppression.

Back in February of this year, Seekins similarly poached Southern Black culture in a series exhibited at Gamut Gallery titled “Uniquely Dark.” The paintings and drawings were co-created with his partner, Aleister White, and borrowed heavily from traditional Louisiana voodoo in an intimate depiction of their romance gone sour. Gamut Gallery could not be reached for comment on this story.

“I think a lot of times people are either being provocative to be provocative or being provocative because they don’t know better,” Fairbanks said. Since artists are expected to be ‘provocative,’ they are often excused from dialogues about race…. people will make those excuses for you. There’s no demand for people to respond, and you don’t have to, because you’re an artist.”

Taylor Payer, gallery associate at All My Relations Arts, a gallery owned and supported by Native artists, said “the art world traditionally has been a white world.” On Seekins’ newest exhibit she says, “It’s a depiction of Dakota history, but a very poor one.” And especially when plenty of Native artists are creating and showing work in a wide variety of styles in galleries and museums across the Twin Cities.

“It’s a perpetuation of the American narrative,” Fairbanks said. “Native erasure [had to happen] for those American stories to exist, for the ‘manifest destiny’ of the empty land that was just meant for white people.”

By speaking for Native people, Seekins is taking space that belongs to Native artists, Fairbanks said, and selling artwork that imitates Native styles for more than a Native artist might receive for their own artwork.

The Facebook page for the opening quickly filled with comments about cultural appropriation, links to Native ledger artists and calls for the gallery to cancel the show. Fairbanks was one of the first to alert her network, which includes a number of Native artists in the Twin Cities, via her social media. “It was good to just instantly light a fire,” she said.

“The fact that someone would show it, that this would have an audience, is all just kind of mind-boggling,” Fairbanks said. The same attitude that allows Natives to continue to be used as mascots for sports teams also permits artists like Seekins to produce and show this kind of work, she said.

On Saturday night, as Seekins’s show opened, a small group of activists, including representatives from Showing Up for Racial Justice and Idle No More, offered gallery-goers fliers titled, “Are you looking to support real Indigenous art?” describing some of the many opportunities to do so. One of the fliers was even taped inside the window to the gallery. 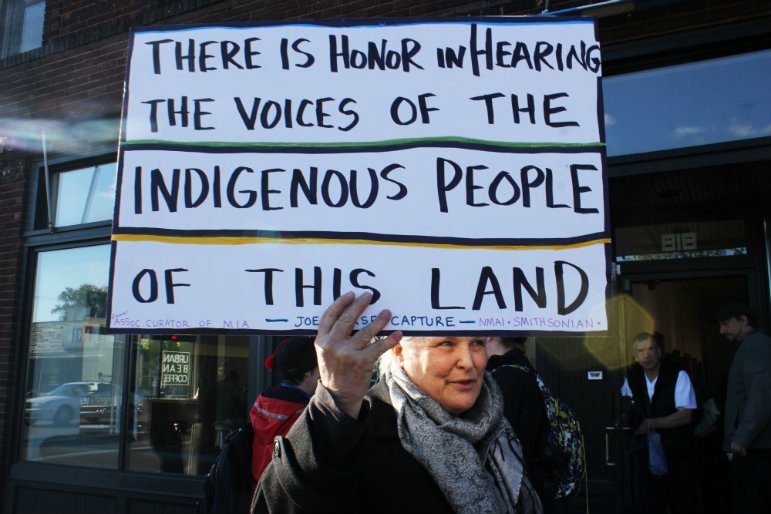 Protester at “The New Eden” opening on May 14. Photo by Nikki Rykhus.

Inside, gallery owner Doug Flanders appeared unfazed by the protesters, saying he didn’t mind them as long as they were “peaceful,” and continued with the business of selling art. One of Seekins’ paintings had already sold for $4,500.

Despite hearing from many people asking him to cancel the show, far more people had encouraged him to continue with it. He said Seekins, who “feels terrible” about the negative response, had suggested covering up all the paintings with a black curtain hanging on the back wall. “I feel that Scott really did a great job with this,” Flanders said. “I hope that people who have been verbally against it come and see the show.”

But many who spoke against the show did not want to set foot near the gallery — “There’s a lot of trauma that comes along with direct action,” Fairbanks said — and at least one protester who stepped in for a look quickly stepped back out again, unable to stomach more than a brief glance around the gallery.

The activists, most of whom were non-Native allies, held signs with quotes from an article by Joe D. Horse Capture, the former associate curator of Native American Art at the Minneapolis Institute of Arts — “For over 200 years, non-Natives have appropriated Native American culture”; “There is honor in hearing the voices of Indigenous people of the land” — and attempted to engage people in conversation as they walked into the Flanders gallery. While some gallery-goers brushed them off, many stopped to discuss cultural appropriation and other issues raised by Seekins’ show.

Seekins said his paintings explore the history of white expansion into Minnesota, driven by the concept of “manifest destiny.” But the fact that Seekins is the one telling the history only continues to erase Native peoples, Fairbanks said.

Native erasure has resulted in a dominant culture that doesn’t “see Native people as a modern, living people,” Fairbanks said.

In response to limited gallery space and in the name of cultural preservation, a system of Native-owned and operated galleries, including Two Rivers and All My Relations, has sprung up across the Twin Cities to support Native artists in all stages of their career, helping to build “an arts ecosystem for Native artists,” Fairbanks said.

“We’re really dedicated to giving opportunities to people who don’t have it other places,” said Payer, and she loves seeing the faces of visitors when they are surprised by the bright colors and contemporary feel of the current show, “Synthesis: Paintings by Aza Erdrich.” 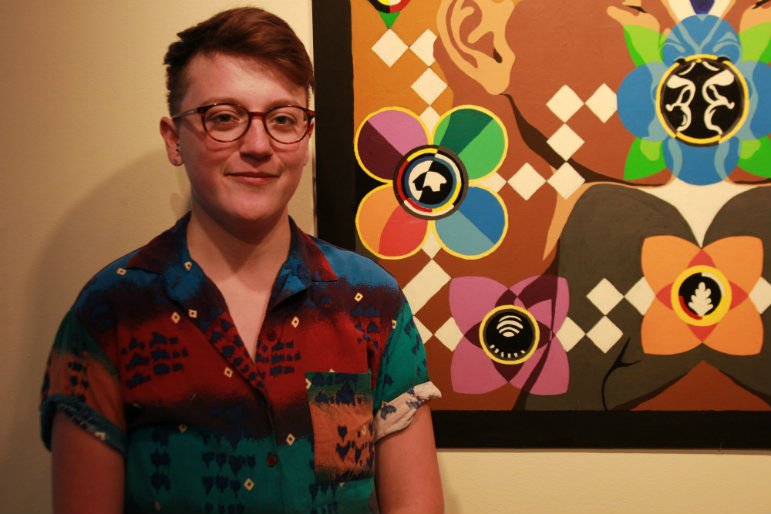 Taylor Payer of All My Relations. Photo by Nikki Rykhus.

“There’s nothing ancient about it,” Payer said of Erdrich’s show. “It’s showing people how we live today. We’re a dynamic, living people. I just think it’s important for people to know that. We can’t just give people surviving things, we need to give them thriving things.”

The gallery plays a big role in helping emerging artists get started in their careers. For example, the Soap Factory offered Erdrich a residency after seeing her show at All My Relations.

Native artists can feel pressured into creating work that fits mainstream ideas of what “Native art” is expected to look like, Payer said. In contrast, All My Relations affords Native artists “the right to be complex,” she said. “It’s one of a kind in the country.”

And for those eager to see more Native artwork addressing Minnesota’s history, they won’t have to wait long. Two Rivers and All My Relations are collaborating on a show that will open in June called “Reframe Minnesota: Art Beyond a Single Story,” featuring work by a variety of artists in response to conversations about the future of art in the Minnesota State Capitol.

Arts + Culture
Katie Spielberger
Do NOT follow this link or you will be banned from the site!
X