A block party of more than 30 residents on Bloomington’s east side was in full swing for the National Night Out, dubbed “America’s Night Out Against Crime,” Tuesday evening.

“This is a record-setting year for Bloomington, with 372 parties,” said Niki Pierson, the city’s Neighborhood Watch Coordinator.  She said 54 teams will visit more than 300 neighborhoods and are all off-duty officers. “We have the police department, fire department, Allina [medical transportation], the health department, police reserves, Explorers, and they are all volunteer. Even the Chief of Police is out there.”

McGruff the Crime Dog, the mascot of the NNO, was scheduled to show up at as many parties as he could in the 90 degree heat, according to Pierson. “McGruff’s got to be hot,” said Robinson.

Block Captains Marti Clark and Steph Ruppert were thrilled by the attendance to their pot-luck. “I’m impressed by the turn-out. It’s a good block with good neighbors,” said Clark. The Captains managed to get a few door prizes. “One prize is a t-shirt from the Guthrie Theatre where I volunteer,” said Ruppert.

From the looks of Bloomington’s block party attendees, there is a good chance Minnesota will rank high again. 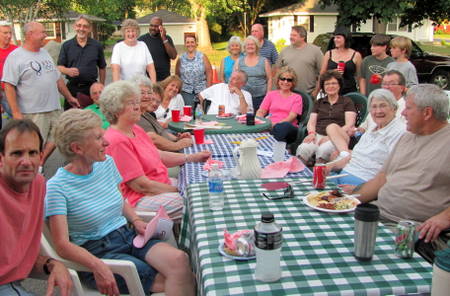 (Above)More than 30 neighbors gathered on the east side of Bloomington for a neighborhood pot-luck National Night Out party. 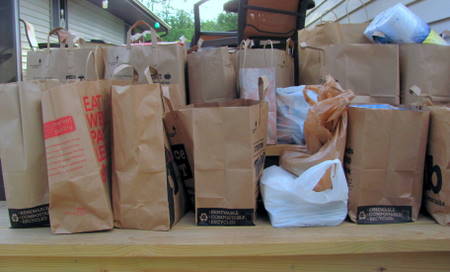 (Above) The block party collected for VEAP, a local non-profit agency.