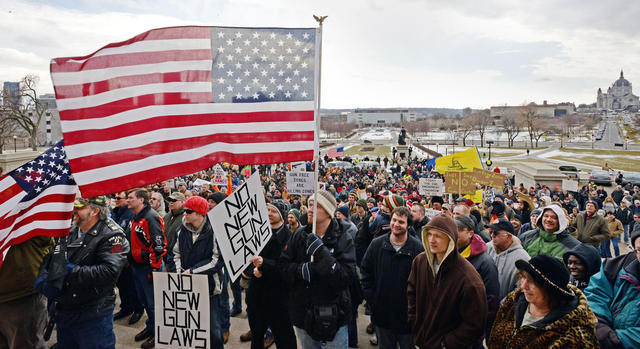 Anti-gun control protesters gather on the steps of the state Capitol for Gun Appreciation Day on Saturday, Jan. 19, 2013, in St. Paul, Minn. (Photo by Jaak Jensen)

As the national debate on gun control heats up, Minnesotans are beginning to enter the conversation.

Some state legislators have promised to introduce bills to increase gun regulation, while others have said they want to ease some restrictions.

More than 1,000 Minnesotans filled the steps of the state Capitol on Saturday to protest further gun control legislation as part of National Gun Appreciation Day.

The nationwide effort was led by Guns Across America in response to President Barack Obama’s vow to strengthen gun control during his second term in the White House.

At the Capitol, protesters of all ages came to urge legislators not to further regulate guns in Minnesota.

Nancy Porter, a grandmother from Anoka County, brought several of her grandchildren with her to the event.

“I wanted [my grandchildren] to see a peaceful protest,” Porter said. “We come from a long line of hunters, and I think it is important for people to see the nonviolent side of guns.”

Speakers at the rally included Rep. Tony Cornish, R-Vernon Center, and Rep. Tom Hackbarth, R-Cedar, who both discussed possible gun legislation to be introduced during the legislative session.

Cornish is a major proponent of gun rights and said one of his potential bills this session would be “Campus Carry” permission, which would allow 21-year-olds with a handgun permit to carry it on campus.

Currently, students, excluding military personnel, are not allowed to carry guns on campus unless they have permission from the president.

Zachary Sudman, the president of the Hunting and Fishing student group at the University, said potential gun regulations don’t worry him.

“I don’t have a huge issue with any of [Obama’s proposals] infringing on my hunting abilities,” he said. “I don’t need an assault rifle for hunting.”

While opponents of further gun regulation have been vocal, proponents have equally made their voices heard.

Sen. Barb Goodwin, DFL-Columbia Heights, introduced a bill this week that would make it harder for convicted felons to regain their gun rights after incarceration.

In the report, the authors asked five questions of the U.N., revolving around how the U.S. is currently handling gun violence and what needs to be done to further curb it.

Noting roughly 30,000 American deaths can be attributed to firearms each year, the report makes several recommendations to reduce gun violence, including universal background checks, a ban on assault weapons and high-capacity magazines and laws prohibiting citizens who have been convicted of domestic violence from obtaining firearms.

Although the report differs from Obama’s proposals for regulation, Green said she was happy with the president’s recommendations.

“As far as a ban on assault weapons and high-capacity magazines, we are very happy with what has been included in Obama’s plan,” Green said. “Those initiatives reflect what we found to be important in our research.”

The gun violence report will be taken into account for final review by the United Nations in October.

Minneapolis Mayor R.T. Rybak has made public his support for Obama’s gun proposal, and U.S. Sen. Al Franken has released statements in support of an assault weapons ban.