“We are the Ones We Were Waiting For” was the title of a highly successful teen retreat organized by the the National Asian Pacific American Women’s Forum – St. Cloud, MN chapter on May 20 to 22, 2011 in St. Cloud.

Twenty Asian American high school and college students, all of whom are young women of different ethnic backgrounds, worked together with mentors as they spent the weekend in intense educational workshops and high energy, fun activities to develop and strengthen leadership skills and self-esteem.

This is the second retreat that NAPAWF has organized in central Minnesota. NAPAWF is the only national, multi-issue Asian and Pacific Islander (API) women’s organization in the country and its mission is to build a movement to advance social justice and human rights for API women and girls (http://napawf.org/).

For the second consecutive time, the retreat was co-sponsored by the Council on Asian-Pacific Minnesotans, a state-wide API organization (www.capm.state.mn.us). This year’s event was also supported by the Optimist Club of St. Cloud, and St. Cloud State University’s Women’s Center and Women’s Action group.

Asian Pacific Islander (API) women and girls, particularly those living outside of major urban areas have to battle with overt racism, sexism, isolation, violence, and harassment.  Through the NAPAWF teen retreats API women and girls will not battle alone – one of the goals of NAPAWF is to build self-esteem, self-efficiency and community for Asian American women and girls. 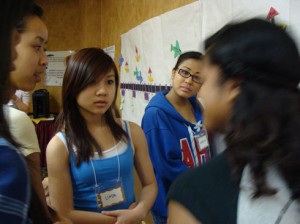 “I didn’t know much about the history of the women’s movement and my OWN history until I came here,” said a participant. Another participant echoed, “Because of NAPAWF, I now have more Asian women friends.”

“It was such an incredible experience and service that this group of women do,” said Vongsay. “Kiran Ahuja, Executive Director of the White House APIA Initiative, is a founding-sister and has continued to be supportive of NAPAWF’s programming.”

Retreat participants learnt about Asian American history and its intersection with the American women’s movement, history that is not taught in most schools. Numerous skits emphasized the skills that needed to be learnt as young Asian American women in this society – ranging from self-empowerment to challenging stereotypes.

Throughout the retreat leadership skills and sisterhood were emphasized and encouraged. This two-day retreat showed the young women their place in history, and in their present and future, they were indeed the ones they were waiting for.

Hedy Tripp was a NAPAWF conference participant; is Vice Chair of NAPAWF’s Board of Directors, and a St. Cloud State University professor.