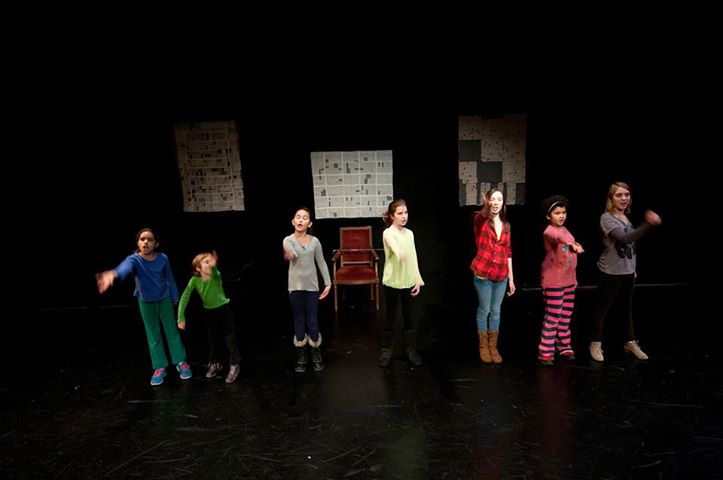 Naked Stages, the annual seven-month program that nurtures emerging artists pressing the boundaries of performance, returns with three shows this year that run for one more weekend. I saw two of this year’s shows—3 Figures by Emily Zimmer and Habeas Corpus by Zainab Musa. Both were some of the best shows I’ve seen at Naked Stages. Both political, Zimmer’s piece was the more overt of the two, unabashedly getting through a political message, while Musa’s piece came from a much personal place.

3 Figures, created and performed by Emily Zimmer (and a group of extremely cute kids) and directed by Beth Cleary, takes on the subject of wealth inequality through portrayals of two historical characters and one fictional contemporary character. The three characters’ stories Ayn Rand, Brooksley Born, and an Occupy Homes activist are framed by a chorus of elementary school students who tell the story of a magician who creates a powerful tool (which he calls “the servant” in order to aid the people of the village). But when a stranger convinces the town to let him buy the “servant”, they find themselves subjugated to persecution due to his limitless power. The kids also sing and are just generally adorable.

Zimmer’s depiction of Ayn Rand is the strongest of the three sections; she gives an uncanny and hilariously bizarre performance that includes birth, desire and basically pure evil.

The second character Brooksley Born, the woman who warned about the probability of economic collapse prior to the economic crash of 2008, has lunch with Alan Greenspan, speaks at congressional hearings and, like Cassandra in the Greek Myth, prophesizes the upcoming collapse to deaf ears as golf tournaments drown her voice. In both of the two characters, Zimmer, always a chameleon onstage, utterly transforms herself into the voices and bodies of the characters.

The third section, where the audience basically enters an occupation of a home, didn’t work for me quite as well. Unlike the first two sections where Zimmer treated the source material with some kind of lens (through the sound design, for example, or through abstraction as she so wonderfully did in the Ayn Rand section), the third section feels pretty much straight out of an Occupy Homes action. I think I would have liked to have seen something similar to the the first two sections in the third scenario.

It starts out in the dark where the performer has a headlight contraption on her face, creating these glowing eyes that move through the shadows. This moves into a dance section, where Musa shows off an articulation that is absolutely stunning. Eventually, she becomes various characters, literally trying on different identities through costume pieces, movement and voice. I won’t spoil the ending, but I will just say that it will leave you electrified.

On opposite nights that Zimmer and Musa perform, Moheb Soliman performs an installation piece called Great Lakes Vista which I haven’t had the opportunity to see yet. It’s noteworthy especially because it’s the first time Naked Stages has granted a fellowship for a performer to create a piece outside of the theater.