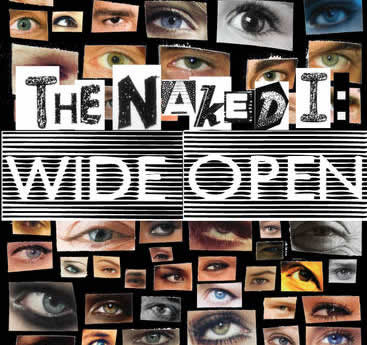 This is probably one of the stranger reviewing assignments I’ve had, because it doesn’t really matter what I say. The entire run of The Naked I: Wide Open has been sold out for over a week now. In fact, they added a special preview performance because everything else was sold out, and that sold out, too. 20% Theatre Company struck a nerve with this one.  They are set.  And more power to ’em.

“There is nothing more dangerous than loving ourselves exactly as we are.”

The only reason it might be useful for me to chime in on this one is that there is still hope for folks who want to squeeze in. They have up to eight standing room spaces for each performance, and there are always a few last-minute cancellations and no-shows. They will get you in if they at all possibly can. So, is The Naked I: Wide Open worth the extra hassle to maybe hopefully get a last minute seat? Yes. Most definitely yes.

“Those of us who cannot disappear pay the consequences.”

Because one of the key reasons The Naked I: Wide Open is sold out is that it’s serving an audience that is woefully underserved. I often lament the scarcity of stories on stage about gay life. This is a driver for me in writing the plays I write, and in my championing of the Minnesota Fringe Festival as a place were such stories can live.

But The Naked I series is presenting stories of the trans* community, which has a far, far harder time finding tales which reflect their lives. Even in an arts community as rich as ours, I had to wrack my brain to come up with any trans* plays (or even plays with trans* characters) which had crossed my path. The only one I could think of, good though it was, was four years ago. (And I missed the first installment of the The Naked I—which was three years ago.) Even a year is a hell of a long time to wait between chances to see your life reflected back to you, in stories to which you can directly relate. But two years, three years, four years… really? No wonder people are flocking to this production. It is an all too rare occurrence.

An added bonus of this installment of The Naked I is that this production is comprised of stories from the experiences of the local trans* community. This is as grassroots as creativity gets. The two act evening is made up of over two dozen selections, presided over by over a dozen directors, featuring nearly three dozen performers. The logistics of this thing are dizzying. The packed house was hooting and hollering and applauding throughout the evening. Each presentation was welcomed with a real sense of joy. Even though much of this was far outside the realm of my own experience, I didn’t feel like an outsider. It was exciting to be invited in to watch.

“Make the arc of her back a language.”

The original Naked I: Monologues from Beyond the Binary by Tobias K. Davis was in some ways a trans* reaction to Eve Ensler’s The Vagina Monologues so it doesn’t surprise me that The Naked I: Wide Open sequel is a bit monologue-heavy as well. A lot of the evening is people telling their stories—or, rather, actors presenting someone else’s stories. The line here is blurry, and that’s a good thing. I had to remind myself a lot of the time that this was a performer channeling someone else’s words. Sometimes the writer and performer were the same person, but more often they were not. Which just reinforced for me how much bigger the trans* community is than I realized.

The evening is awash in humor and love and sex. I was also going to say “anger” but I think it’s actually more defiance, which is not the same thing. The eye-opening thing for me about The Naked I is its pointing out how much I take the binary “male-female” gender construction for granted. I should understand from personal experience how labels can be limiting in terms of gender and sexuality, but The Naked I makes me realize that I have no idea just how complex these ideas can get. It’s the struggle for a place where such complexity can live, in a world were we value being able to quickly and simply categorize things and people, that’s at the heart of The Naked I—and what makes it so engaging to watch.

“My identity doesn’t live between my legs.”

I find myself worrying about misindentifying someone (he, she, boy, girl, gay, bi, straight, queer). I also find myself understanding a little better that the labels we get are often ones which we had no say in creating. At the end of the evening, in the midst of the rousing spoken word anthem “Disordered Bodies” from Kris Gebhard (directed by Lindsey Cacich), the writer/performer says, “We’re called trans-gendered so others can believe they are properly gendered.” That concept still knocks me on my butt every time I think about it. The things I have taken for granted are legion.

“I’d crawl inside you if I could.”

“Turn on your TV.  We are still comic relief.”

Gebhard’s closing performance is mirrored in the end to the first act, when writer/performer Davey Ethan Wilkes presented an equally exciting spoken word piece, “Wounded” (directed by Gebhard), which laid down a challenge for greater inclusiveness and acceptance within the queer community itself—which can be just as tied up in labels that divide as any other group of people. “I will claim you if you will claim me.” The moments I live for in theater are the ones where quite unexpectedly the evening turns into something mesmerizing. Wilkes was so dazzling in his wordplay and the concepts he was tackling that I found myself thinking, “Who the heck is this guy and where can I see more of what he’s doing?” That doesn’t happen a lot, so it’s doubly exciting when it does.

“There’s something about the experience of being misread that makes you die a little inside.”

The sexy standouts of the evening were: “Dear Pussy” in which performer Jay Masika (directed by Claire Avitabile) offers up Anthony Neuman’s ode to a person’s love-hate relationship with their genitalia; “How To Make Love to a Trans Person”—where Remy Corso, Maria “Mea” Johnson, and Ariel Leaf writhe together in word and deed, presenting the slippery language of Gabe Moses (directed by JL Mohnkern); and “Naked Squared”—another Anthony Neuman piece, written with director Nicole Wilder, performed by Neuman and Merdith Larson—here two actors tangling with each other and red silk sheet quickly made you forget they had clothes on the whole time.

Comic highlights included: “The Story of Bob”—Ben Resman’s script (directed by Megan Lembke) in which a person in transition (the wry and funny Abel Knochel) gains, then loses, a penis; and “Biscuits”—a charming little scene from Lane Mckiernan (directed byAnthony Neuman) where three guys (Ben Resman, Lucas Scheelk and Davey Ethan Wilkes) who once grew up as girls, and thus never really learned how to tie a necktie, prepare for a boys’ night on the town, with the help of the unconventional southern belle who loves them (Mykel Pennington).

“If you cannot look me in the eye, I will always remain a mystery.”

The Naked I: Wide Open is a very full evening, but a good one. And while I don’t want it to ever become something we might take for granted, if theater focused on trans* stories is this good, I hope 20% Theatre Company (and a lot of other theater companies around town) don’t wait another two or three years before something like this happens again. Clearly there’s an audience to support it, and a still wider audience that could enjoy it (that is, if they can get a ticket). Very highly recommended.

* That trans* threw me the first time I saw it the program, too.  It’s not meant to refer to a footnote. The program helpfully explained to me that this is a catch-all qualifier: “when you see trans* in print, this shortened, asterisked word generally refers to a group of people that includes transgender and gender non-conforming individuals.” Given the minefield that using pronouns has now become for me in this context, trans* is a respectful and useful safety net.