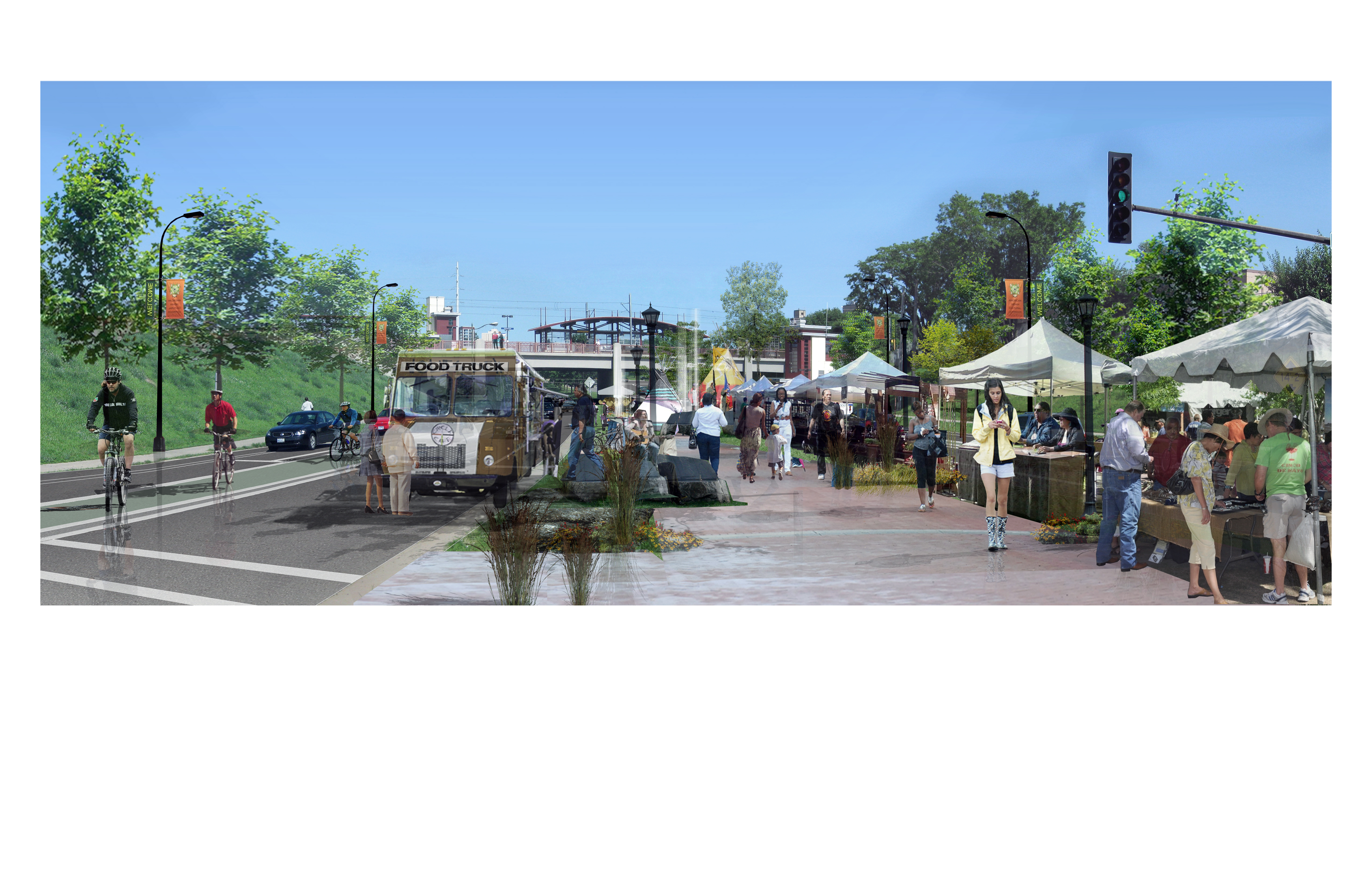 Right now, the Franklin Avenue Light Rail Station isn’t the most welcoming or pedestrian-friendly place. If you’re biking east on Franklin, it’s a huge hassle to cross over to the ramp that takes you up to the station—not to mention it’s perilous biking with no bike lane and cars whipping past you as if you’re on a highway. It’s also a rather ugly area, a sea of cement that isn’t exactly inviting. Luckily, the Native American Community Development Institute (NACDI) has plans to change all that with the Anpetu Was’te Cultural Arts Market.

For the last few years, NACDI has sought to turn Franklin Avenue into the “American Indian Cultural Corridor.” Part of that plan includes creating a more welcoming space near the light rail station, with colorized bike lanes, a potential outdoor market and green areas that will liven and beautify the area, creating an inviting space for pedestrians, and eventually spur more real estate development in the area.

The project aims to develop a pedestrian-friendly gateway to the corridor, linking the Franklin Avenue Light Rail Station and businesses and development that currently exists south of Bloomington Avenue. NACDI recently received a $435,000 grant from ArtPlace, a national collaboration of 11 major national and regional foundations, six national banks, and eight federal agencies including the National Endowment for the Arts that aims to enrich communities through investments in the arts.

Andy Hestness, the interim executive director of NACDI, said the organization is currently in talks with people from the city to conceptualize the project over the next few months. They’ve also given presentations at the Seward and Ventura Village neighborhoods, and have received an endorsement from Seward.

By fall, there will be a series of community engagement meetings with the Native American community as well as the local neighborhood, to hear from stakeholders about different elements they would like to see included. The engagement meetings, said Hestness, will be used to build ownership of the project by community members.

Next winter, NACDI will undergo the design and approval process, with construction beginning in the spring of 2013. Hestness said he hopes the grand opening for the development to occur around November of 2013, with the first full year beginning in the summer of 2013.

The $435,000 grant will be distributed in a number of categories, the largest of which will go toward the construction of the plaza itself, he said. Additionally $100,000 will go toward public art that will be installed permanently, as well as overhead costs. According to Hestness, there will be an RFQ process for artists, and a committee will be put together to review proposals, which will be installed during the 2013 construction season.

So far, Meyer, Scherer & Rockcastle Architecture Firm has designed the initial conceptual designs, and they may continue to work with NACDI, but Hestness said that NACDI is hoping to identify a landscape architect as well.

One of the main goals of the project, Hestness said, is to create pedestrian activity at the Franklin Station. The median, currently 30 feet wide, will be turned over into a pedestrian space, with benches, pavers, and possibly a performance space with a mini amphitheater, where musical or small theater performances could take place, according to Hestness.

The plaza will also include space for vendors, as well as space for food trucks to pull up to the median. “The whole idea is that it’s been about eight years since the light rail station was put in,” said Hestness. “We haven’t seen the real estate development that we would like.” Investing in the plaza will hopefully bring about some commercial and residential activity, he said.  “The idea was to create something catalytic without investing in a huge mixed-use development.”

Some of NACDI’s goals include creating a safe place for pedestrian to cross Franklin Avenue—which currently has no safe place to do so—and also to connect the light rail station to the median on both sides of Franklin Avenue, Hestness said.

NACDI has been in touch with Hennepin County about extending the bicycle lanes in Seward all the way to the area. The concept is that Franklin would have two one-way streets, rather than one street with a median. Initial plans include expanded parking at the light rail station, colored bicycle lanes, and a traffic-calming green area between the two one-way streets. The timing is especially right, Hestness said, because Hennepin County will be repainting all the lines on Franklin Avenue next summer.

NACDI has also been partnering with Transit for Livable Communities (TLC), an organization undergoing a planning study about Franklin Avenue from Minnehaha Avenue to Dupont Avenue. Steve Clark, manager of Transit for Livable Communities’ Walking and Bicycling Program, said TLC hopes to find ways to get bike lanes onto Franklin Avenue, which has one of the highest crash rates for bicyclists of any street in Minneapolis. “Our goal is to develop a report that shows the different ways to make things work better for bicyclists and pedestrians,” Clark said.

Clark said the Franklin Avenue light rail station is a “wonderful opportunity to do something creative. It could be a major hub. Right now it doesn’t feel like a place that is inviting for walking or bicycling. NACDI’s plans could really transform the area.”

As for NACDI, Hestness said they have been supportive of city plans to improve lighting and better connections to the rail stations, but “at the end of the day it wasn’t enough. It’s not turning the Franklin station into a destination,” he said.

“We continue to look for ways to connect the Cultural Corridor activities primarily west of Bloomington to the Light Rail Station,” Hestness said. “Short of a large-scale development, we want to improve the pedestrian realm.”

Finally, the plaza meets the mission of All My Relations Arts, a program of NACDI, housed at All My Relations Gallery. NACDI wants to “increasingly integrate arts into community development work,” Hestness said. Having a marketplace where artisans can sell their work—and also, a home for public art—will anchor that, he said.

“We’re just really excited about this opportunity to connect a destination element at the station with building arts and Native art in particular,” Hestness said. “We’re happy to see this potential move forward.”