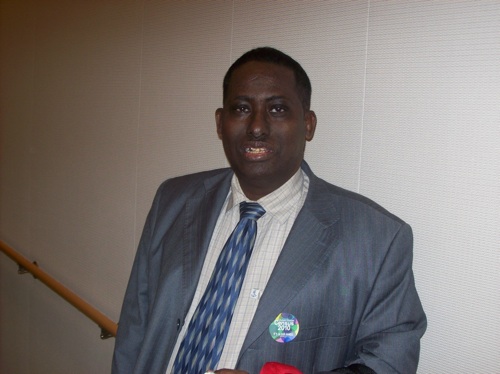 The count is on! Over 120 million U.S. Census forms were sent out to addresses all over the country earlier this month.

Dale Ho of the NAACP Legal Defense Fund, who has worked for the past year or so on the Count on Change 2010 project convincing Blacks and people of color nationwide of the importance of filling out the 10-question Census form, says his organization has worked with three other Black organizations: the National Urban League, the National Coalition on Black Civic Participation and the NAACP.

Speaking by phone from New York City, Ho explained, “One of the things in our public educational and outreach efforts is that we have been emphasizing that the Census is completely confidential. A lot of people don’t want to filling out information about where they live, or if a Census worker comes to their door, they don’t want to open their door to strangers.

“This is something that we have been working with and trying to educate people, that Census information can’t be shared with anyone outside of the Census Bureau – not to law enforcement, the IRS, private organizations, landlords and immigration.”

This message is particularly directed to communities with historically low census returns, said Ho. “We are worried, in particular, about African American communities and other communities of color because those were the communities most likely to be undercounted.”

To the best of our knowledge, local NAACP branches have not been a part of Count on Change 2010; branch officials have not returned our phone calls by press time. However, other local officials have been actively working to improve the count among communities of color.

“Hennepin County employees won’t be filling out any Census forms [for residents],” Cole said. “But when they are asked by clients, they should relay that information that it is important [to fill out the census].”

Across the river in St. Paul, Human Rights and Equal Economic Opportunity Director Luz Maria Frias said members of her staff have met with members of the city’s communities of color to discuss the Census count. Frias was named the reorganized department’s first director by St. Paul Mayor Chris Coleman in 2009.

“[We] worked on various inclusion strategies and getting the word out to every corner in St. Paul,” Frias pointed out. “One of our unique initiatives was partnering with local food shelves and churches” to distribute Census information.

However, despite an overall Census form return rate of 77 percent in Hennepin County and 78 percent in Ramsey County in 2000, State and local officials remain worried about undercounting among communities of color. Part of this stems from a history of mistrust of government among many Blacks, immigrants, and other people of color. Eliminating or, at the very least, helping relax these concerns was the primary goal behind the Minneapolis/St. Paul 2010 Census Awareness Campaign, which kicked off in mid-January.

“We are trying to assure people that [Census information] is confidential,” said Saeed Fahia of the Confederation of Somali Communities of Minnesota. “I’m hopeful that all Somalians in Minnesota will be counted this time.”

Added Cole, “One of the things that we talked about within the Black community is that, yes, the Census has not been necessarily used in our favor, but the problem is that if we are not represented like we want to be, all [Census officials] have is the people who fill it out.”

Having the word go out through local organizations and churches also helps, noted Ho. “We found that having people from African American communities and communities of color spreading that message has been very, very effective.”

Although too early to tell, Ho says he believes the Count on Change project was very successful. “We reached thousands of people in over a dozen states, and we are really excited about the reach of the program.

“Every Census has missed people of color,” he surmised. “That’s the bad news; but the good news is that every Census has been better than the previous one. So, we have every reason to believe that if community groups keep spreading the word about the importance of the Census and that people have nothing to fear from filling out Census forms, this could be the most successful Census to date.”

Cole concluded, “You can easily see the light bulb come on, and how they change when [Blacks and other people of color] realize that [the Census] is really about a quality of life issue.”