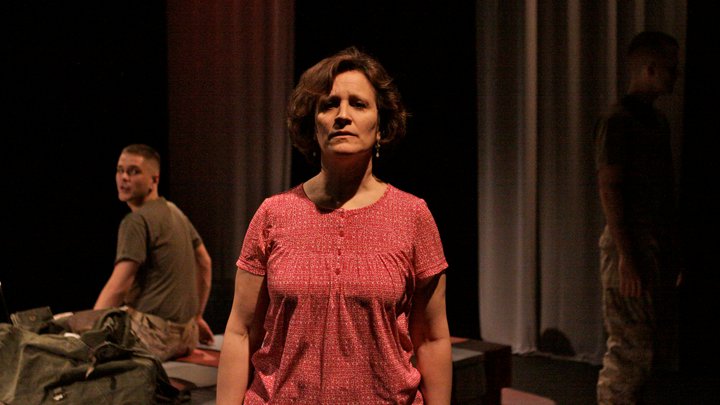 I was at the Fringe Lottery last week, rather than at the first night of tech for my play “Leave,” and yet, the play followed me there.

Of course, this was partly due to the fact I was carrying a stack of postcards with me and handing them out, and leaving a stash in the two places one can put cards on display for people to take at the Bryant Lake Bowl.

But when a fellow Fringer flipped over the card and read the cast list, he said, “Tina Sigel is wonderful.”

Believe me, I know.

The wonderful and terrifying thing about good actors is, you can’t relax.  Good actors make a better playwright. One, because you live in fear of wasting their time by not writing a good role for them to dig into. Two, because they can do anything, so you have no limits on where you can go with a character.

The character of Anne, mother of Seth the Marine in “Leave,” is a relatively new creation. She only came along in the previous draft, which means she’s only been walking and talking and telling me who she is since 2008. Seth and his civilian husband Nicholas have been my regular companions since 1997. They still surprise me, but I know most of their tricks already. I knew when we dove into this new, expanded version of the script, that Anne would be key. How she grew would influence the direction of the show.

The danger was that she just turn into some kind of sounding board, listening to the problems of the other characters like a good mother would, and not having any stakes of her own in the story.

I had a friend of mine who is the mother of a Marine say, “Well, she wouldn’t do that.” And I allowed that kind of thing to hang me up for a while. Until I remembered that I wasn’t writing a character based on my friend, I was writing someone diametrically opposed to the views of my friend. Marines have all kinds of mothers. Anne is just a different variety.

She’s proud of her son. She supports her son. She writes him daily. And more importantly she makes it possible for her son’s husband to write him daily as well, by copying over his letters in a woman’s handwriting. So it looks like he has a girlfriend back home, rather than a boyfriend.

But she hates his job.

Maybe she’d hate it less if the military wasn’t using the “don’t ask, don’t tell” policy to make his life harder, to force him to lie, to cut him off from the love and support he needs most.

But she’d probably hate it anyway. “Don’t ask, don’t tell” is just a convenient springboard for her to argue that the Marines aren’t good enough to require him to risk his life and possibly die if they won’t treat him as a complete human being.

“You’re embracing fighting as a way of life.”

“I’m not picking a fight. I’m offering to be the one who fights if fighting needs to be done.”

“And I’m proud of you for stepping up.”

“You just don’t want me to actually do it.”

There used to be a scene in the middle of the play where Anne sets Seth’s friend and fellow Marine Jonas up as a guest in her house. Jonas has accompanied Seth home on leave. Anne puts him in Seth’s old room. Jonas is also gay, but his parents don’t accept him the way Anne and her husband accept Seth. Anne becomes something of a surrogate mother to Jonas, and that scene is where it starts.

In script discussions, the director Matt Greseth latched onto a line of Nicholas’ in another scene later in the play, “This isn’t your first leave.”

“What were the other leaves like? Is it possible we could go back in time once or twice, to see Seth before the war and the lies and the secrets started to grind him down? When he was all fired up and excited to become a Marine and serve his country. For instance, what if, when Anne is settling Jonas into Seth’s old room, it prompts a memory for Anne of her own son, before he went off to boot camp? Maybe she’s even packing Seth’s duffel bag as she’s helping unpack Jonas’ duffel bag.”

Well, I quickly found out that Marines don’t pack for basic training. The Marines give them everything, rebuilding them from scratch. They just need a driver’s license and social security card for ID, banking information so they can get paid, and the clothes on their back. But the idea stuck.

I started calling the scene “2 Marines” for short. On paper, it looked really good. Anne would be the pivot, shifting back and forth in time, from the present with Jonas, to the past with Seth.

But of course, you need an actress who can actually do that without giving herself and the audience emotional whiplash. Someone who can make those transitions smooth and seamless. The other two actors and the director have a lot to do with it, too, but if Anne doesn’t work, the scene doesn’t work.

Tina makes Anne work. She, like everyone else in this cast, is a joy to watch creating a character in a scene.

Because all I’m providing are words. They’re an outline. I can’t magically create an emotional connection. That’s where actors come in, guided by a director.

The first time I watched Tina as Anne, and Ryan Henderson (as Seth) and James Doyle (as Jonas) dig into the “2 Marines” scene with director Matt Greseth, I knew we were gonna be just fine. “There’s a show in that script after all,” I thought. You’re never sure until you see it start to appear.

This used to be the first scene of the second act, but as I worked on the script in those early days of rehearsal, I realized “2 Marines” was actually the end of the first act.

It’s quiet. It’s not a literal cliffhanger. To be honest, I was a little worried at first that shifting the act break was the wrong decision.

But as I was watching a week or so later in rehearsal, I found myself writing this note during that sequence…

After our new last scene in act one had once again wrecked me before we took a break in rehearsal a few days before tech, I turned to the director and said, “Thank you for making me rewrite this scene.”

Anne is trying to help a young man in the present feel at home in a strange place, and feel better about himself in general. All this reminds her of the time she tried to persuade her boy not to go to boot camp, to understand his decision if she couldn’t change his mind, and to worry about what this was going to do to him, to their family, to his husband.

And the audience knows from the opening scene at a graveyard that somebody is in the ground. It’s probably one of these two Marines.

And that’s when you know you’ve got them.

Come back for Act Two.

And see this mother really kick into high gear.