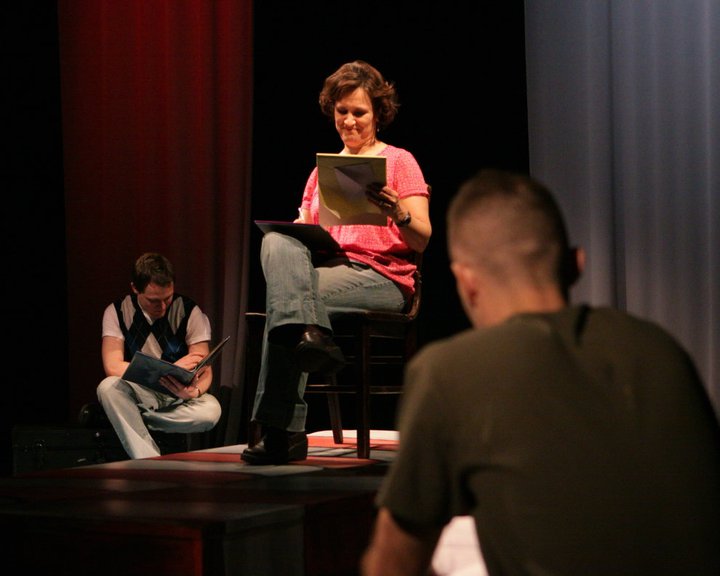 Before one of the runthroughs the other night, one of the actors wandered by wearing only a towel wrapped around his waist. I did a doubletake until I realized, “oh yeah, that’s his first costume.”

For which the actor could not resist teasing me, “Yeah, the first time the audience sees me, I’m wearing a towel and have to say the word ‘faggot.’ Great first impression, thanks a lot.”

A couple of weeks back, when they first started stringing the scenes together in sequence, I watched the top of the show, thinking about first impressions, and scribbled in my notes, “Wow, I’m really flouting audience expectations the first three scenes of the play.”

We don’t really get to a “normal” scene, where two people are having a conversation with each other, until the fourth scene in.

Then one actor leaves and the one who remains turns and begins speaking to the audience.

(Hello, everyone. Not only are you right on top of the action, but there will be no fourth wall sometimes.)

The one actor finishes speaking and leaves.

The other actor returns, this time dressed for desert duty in the army. He carries a box. He sets it down, he opens it up. He strips – boots, pants, T-shirt – stopping only for a moment when it comes time to remove his dog tags.

He stands there in his boxer briefs and looks at them.

Then he dumps them in the box, closes the box, and carries it away.

(A wordless evocation of “Don’t Ask, Don’t Tell” – did he leave voluntarily? was he dishonorably discharged? We don’t know. He hasn’t said a word, we still don’t know his name.)

(Will the audience also think this is all the skin they’re gonna get? Fear not, more to come. We wouldn’t cheat you like that, I swear. But seriously, enjoy the view.)

The actor who spoke to the audience returns, this time in non-funeral clothes.

She sets herself up on a chair in the middle of the stage. In front of and behind her at opposing entrances on the diagonal, two new actors appear and sit down. They then all proceed to not quite talk to each other, conversing through a screen of coded words in their letters. But we start to get an idea of the memory of who they are vs. who they’re pretending to be.

Then that scene clears out and two people finally start talking face to face.

And telling jokes, so we know it’s OK to laugh.

It’s nervewracking to be a playwright sometimes. Those first 10 minutes or so will be one of them.

The play in general is going to be more a play the audience pays attention to than vocally engages. There will be laughs, but there will also be fights and tears.

Coughing will make me nervous, though you can hardly avoid coughing this time of year.

I have to remind myself that quiet means they’re paying attention.

And laughs (and sniffles) mean we got ’em.

It all starts tonight.

The world premiere of this newly expanded and updated version of “Leave,” from Urbran Samurai Productions and yours truly, runs February 11 to 26, at the Sabes Jewish Community Center. You can find all the pertinent information you might need at urbansamurai.org