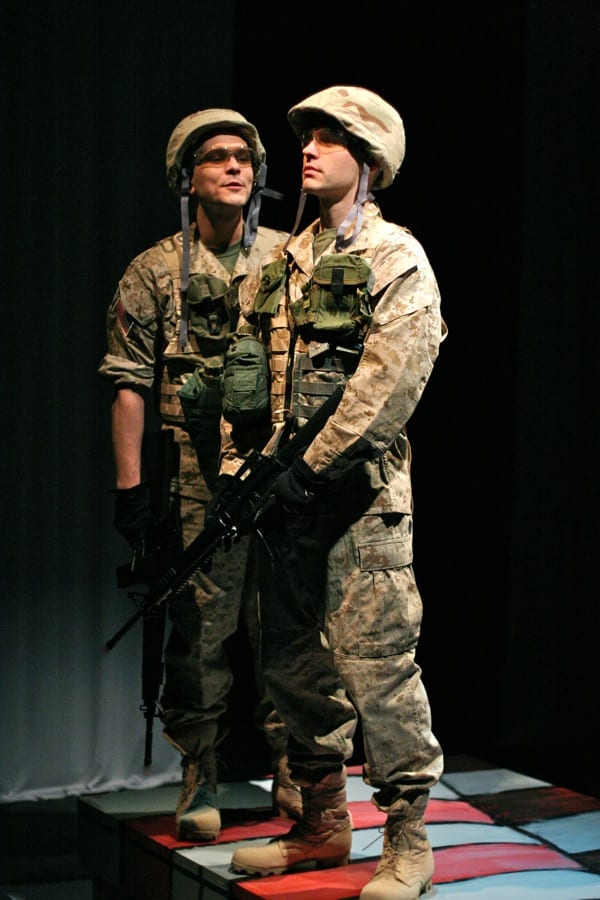 When my first play was produced in Minneapolis, the whole family flew out from the east coast to see it. As we sat waiting for the show to start, my dad noticed I had a weird look on my face.

“I’m just looking at the audience. I don’t recognize most of these people. I don’t know them.”

When a good friend and his daughter came to see the opening night of my current play “Leave,” he looked around and asked me, “So who are all these people? Do you know them?”

“No, except for you, an actress friend, and the theater critic here tonight, I don’t know a soul.”

My friend got an enormous grin on his face and jabbed me in the ribs, “That’s fantastic, man!”

The play “Leave” has a cast of five.

But the production actually has a cast of seven.

The design elements (set by Erica Zaffarano, costumes by Marcia Svaleson, lights by Grant Merges, and sound by Kevin Springer) have a personality all their own, inform the actors and help create a world around them – guided, as the actors were, by the director Matt Greseth. So they all count as cast member number six.

But the all-important final cast member didn’t show up until opening night. The audience.

Because we don’t know if we’re doing our job properly if there isn’t someone out there responding. A production without an audience is just a bunch of people standing around talking to themselves. A story needs a storyteller, but it also needs someone to hear the story. Stories are told to be shared. If a theater production is a living, breathing thing, the audience is oxygen. Cast member number seven. And the last member of the cast so far has been very good, and giving, to us.

Every audience is different, of course. The first night was a more quiet, contemplative bunch. The second night was a bunch of people more in a mood to laugh, both approrpriately and nervously (both of which were a lot of fun to hear). The third night was our biggest crowd yet and they seemed to feed each other as much as the actors. 30, 40, 60, the numbers keep growing, which is nice to see. Word of mouth and a couple of reviews will hopefully keep that trend going.

It’s an atypical audience set-up for that performance space. Instead of being down in the auditorium (you know, where the theater seats are), chairs have been arranged on three sides of the playing space, up on stage. The first night, the first person in the door actually went out to the regular seats until they were redirected. No, really, this isn’t special VIP seating up on stage, you’re all supposed to be up here with the actors. And you’re all going to see each other across the playing space.

At first I wondered about the configuration, until the director explained at first rehearsal, “I don’t want a proscenium between the audience and this story. We want it to be an intimate experience. No fourth wall.” Oh, I get it. Makes perfect sense. (Playwrights can be slow sometimes, what can I say? We write the big picture, but we don’t always see the big picture.)

Though my friends (particularly those in my writing group) are already very familiar with my stories and the reasons I’m telling them, I have to admit it’s always nice to see at least one or two familiar faces in the crowd each night. Opening, it was a writer and an actress who have been through the development of this script and many others with me. Nice to share the finished product. Theater being a teeny tiny world, the actress also knew several members of the company, so that made it doubly fun for her.

“It’s such a sensual production. I don’t remember the last time I saw a production this sensual.”

Second night, two more dear writer friends came out. Again, the script wasn’t a total surprise to them, so when the performances elicited a meaningful “hmmm” of acknowledgement of a particular moment out of them, I counted that as a big victory for the cast. One friend runs a theater company and she was so impressed with the sound design, I made sure to introduce her to Kevin, our designer.

Another delightful surprise was the director of the previous incarnation of “Leave,” Justin Latt, showing up unannounced. From Bismarck. He just really wanted to see the characters and the story again. What an amazing guy.

Also, a number of the actors who auditioned but weren’t cast have been coming to see the show, alone or with their significant others, which makes me happy. We did our job right in auditions. They know we want to work with them, the right role just hasn’t come along yet. And apparently they still want to work with us, and see how that thing they auditioned for turned out in the end. They often make some of the most engaged audience members. A nodding head, a body bent forward in rapt attention, a big bright infectious smile. Me, I start already wondering where we could use them in the next script.

Pay-what-you-can Monday nights are fun because that’s when most of the cast’s theater friends in other shows can come and see them. It’s a boisterous kind of energy. Plus, this Monday was Valentine’s Day. At intermission a friend of mine was already congratulating me, saying what a romantic show it was, perfect for Valentine’s Day.

A bunch of friends from my second day job at the Guthrie box office came to see the show that night, too. It was great to share it with all of them.

“Now you know what I’m doing when I’m not working at the box office.”

“And sometimes even when you are working at the box office,” one of them rightfully teased me.

In my defense, we can sometimes spend large stretches of time waiting for the phone to ring or for the next person to walk up the counter. So I make use of the time, and the Guthrie is fostering still more new theater.

My cover frequently gets blown – the writer in the house. I try to sit in the audience, unknown, so I can take in the audience response without them looking over their shoulder thinking, “Uh oh, the guy who wrote it is right over there.” But just like I’m overhearing their conversations without even trying to eavesdrop, they’re hearing my friends talking to me, so they quickly figure it out. This results in some interesting exchanges…

I try to never sit in the front row. During rehearsal, it was useful, just to have a body there, for the actors to remember how close the audience was going to be to the action, what the sightlines were like, etc. Since I was there all the time, I became kind of like furniture. I ceased to freak them out. I don’t know why, but I think in performance it would just be weird to see me up there now. First of all, I can see just fine a row or two back, I’m not missing anything. Second, I’ve had my time in the front row. Third, like I said before, I’m trying to keep a low profile. But I want to be sure that front row is filled with other people, so I try to encourage it.

A group of men in the front row ahead of us on the second night seemed from their conversation to be ex-military. Throughout the play, there were moments they wiped their eyes. At the end of the evening, a friend of mine tapped me on the shoulder to disengage me from a conversation. Someone wanted to talk to me. I turned around and it was one of the ex-military group. His eyes were red. He smiled. He extended his hand.

Damn. These moments always throw me.

But I’ve learned the best thing to do, when you and an audience member are both overwhelmed, is to respond in kind. I took his hand and smiled. I think I nodded, maybe even bowed slightly. Audience members who connect with the work that personally always humble the hell out of me.

“Thank you. For coming.”

Show days always find me giddy and distracted. And it’s mostly about one question…

What’s the seventh cast member going to look like tonight?