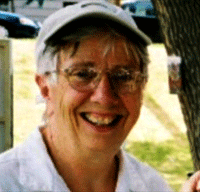 The last time I saw her was several weeks ago in my living room with two of her old friends who, years ago, had taught school with her at Robbinsdale. They were trying to convince her to buy a unit and move into the Kenwood Isles Condominium (minimum age 55) where she’d possibly be my hall neighbor. She smiled agreement. Lois Swenson smiled a lot. But to occupy my building, she’d have to sell her house and its contents, much of it derived from her frequent dumpster divings. Shaking her head she said, “I’ll think about it.”

A few weeks earlier when she had provided me a ride to the monthly meeting of People of Faith Peacemakers, she was driving a new car. As I remember, her brothers had either forced her to get rid of the ancient, beat-up one she’d had or they’d given her the car. “Excuse me, just a minute,” she’d said as she removed an old non-working electric fan and a cardboard box filled with plants of some sort from the front seat of the car and placed them on the back floor of the sedan, filled with other miscellaneous material some could call junk. Lois was taking the fan to a friend who’d repair it, after which it would be given to a needy family, and the plants for her yard were being thrown away by city workers from a downtown site at the end of the blooming season.

She knew the dumpsters where treasures, not trash, were most common. Her favorite time to dumpster dive was when students left the various Twin Cities colleges for summer vacation. Rugs, furniture, canned goods, clothing—she’d find this all plus much, much more. And she knew people who could use them.

But that was just one aspect of the unique person who was Lois. She was a clearly defined member of the local peace community and her face was ever-present in demonstrations for peace and justice as well as planning meetings. A faithful member of the Lutheran Church, she was, in addition, supportive of all churches who supported justice and world peace. I think she could just as easily have been Roman Catholic or Unitarian. Religion was not an intellectual pursuit for her. It was a down-to-earth daily and hourly practice of goodness and mercy.

She could be impulsive. I remember that on one particular occasion when we’d set a time to meet, she was about 20 minutes late. She explained, “I was driving by this Lutheran church where I know the pastor and I decided I should just have a quick visit with him. We had a wonderful conversation about peace and what his church was doing about it and what it wasn’t and why.” “How did you get in to see him?” I asked, knowing that church officials are usually not open to the casual visitor. “Oh, we’ve been friends for years,” she said, “but it had been a long time since I had seen him.”

She had traveled to Central America and Africa, not as a tourist but as a peace activist. A complete obituary would carry information about these trips. Her accommodations in these countries were not those most Americans demand. She wanted to experience life there as the local people did. For example, some part of an African journey was via truck. As a result she was quite active in immigrant communities.

We had many gloomy conversations about the state of the world, both environmentally and politically; yet she always radiated good humor and hopefulness. I am trying to erase from my mind what her last moments on earth must have been like. The police reports say she died from a beating. Who? Who would have committed such a heinous act? Only someone who was either mentally ill or crazed with drugs. And I know, really know, that if she were able to talk to me and I began to castigate her murderer she would have cautioned me, “No matter how hard it is, we human beings have to forgive.”