I had a delightful lunch the other day at Jakeeno’s Pizza & Pasta, 3555 Chicago Ave. S., Minneapolis, with signorina Luisa Tetrazzini. The legendary Italian coloratura soprano is in town to perform at the Minneapolis Fringe Festival, with performances scheduled at Patrick’s Cabaret on August 2, 4, 7, 9 and 11. (Showtimes vary.) 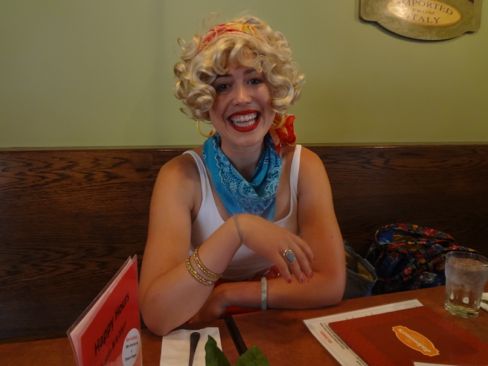 I had hoped to find a restaurant where we could enjoy her namesake, pasta Tetrazzini, but with the closing of Grandma’s Saloon, that dish seems to have vanished from the local repertoire. (There is some dispute about whether this dish was invented at the Knickerbocker Hotel in New York City or the Palace Hotel in San Francisco, but in any case it was invented in her honor.) Jakeeno’s does serve a pretty good chicken Florentine, which is made with penne pasta, spinach and cheese, and honors the city of Tetrazzini’s birth ($5.75 for lunch, $10.99 for dinner.)

Over pasta and pizza, Tetrazzini regaled me with stories of her adventures on stage, at the table and in the boudoir. It turns out that Ms. Tetrazzini has a passion for pasta and men as well as singing, and an interesting ability to combine those passions. One review described her performance at the Edinburgh Fringe Festival as “an oddly sexualized mix of character comedy, well-executed opera and spaghetti. Her voice control was incredible, especially as she was wolfing down her spaghetti.”

Tetrazzini wasn’t actually on the official Edinburgh Fringe Festival program, but she gave recitals during the festival at a local strip club, which made its stage available to unofficial Fringe participants before its regular business hours.

At some point in our lunch conversation, it dawned on me that I — and the good citizens of Edinburgh — might be the victims of a hoax. Several clues supported this suspicion:

2) The Edinburgh Fringe Festival was founded in 1959. 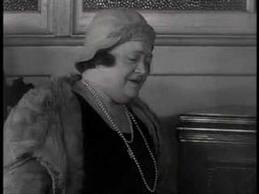 3) My dinner companion didn’t look anything like the photo of Luisa Tetrazzini in her Wikipedia profile. (In her later years, the original Ms. Tetrazzini was quoted as saying,   “I am old, I am fat, but I am still Tetrazzini.”)

Upon intense interrogation, my companion confessed that she was in fact Parker Genné, a local performer and educator, a trained opera singer with a degree in performance from Lawrence University, and a former ecdysiast. (You can look it up.) Which would explain why she came to our lunch accompanied by her mother, Maria Genné.

Full disclosure: I went to seventh and eighth grade at Ray Elementary School in Chicago with Maria Genné, back in the era when Ray Elementary School had a dance every Friday night , held in the school gymnasium. Every boy faced the daunting moment when he would for the very first time ask a girl to dance — a moment anticipated with great fear and anxiety. For the boys in Mr. Moody’s eighth grade class, the two choices were Maria Genné and Maggie Howe. Maria was the preferred, safer choice, even though she was a foot taller than any of the boys, because she wouldn’t make fun of you. Fifty years later, Maria is still initiating people into the mysteries of life through dance: she is the executive director of the award-winning Minneapolis-based Kairos Dance, which “work(s) with older adults in intergenerational settings to liberate the healing power of interactive dance and story” and Parker is one of Kairos’ artistic collaborators.

How did Parker Genné become Luisa Tetrazzini? “I was traveling all over the world and I wanted to combine my love of singing opera with eating food so I started playing around primarily in burlesque, but I got so sick of having to pay so much attention to take off your clothes because I like to eat.” In San Francisco, during her short-lived career in burlesque, a fellow dancer known as the Stripping Granny, told her about Tetrazzini, who had lived for many years in San Francisco, and also encouraged her to perform in Edinburgh.

The other Luisa Tetrazzini

At any rate, I am looking forward to a great show – Genné/ Tetrazzini will be accompanied by guitarist Tyler Otis, as she presents a repertoire that ranges from classic opera to old cowboy tunes.

As for Jakeeno’s, it’s one of the last of the old-time Midwestern Italian red sauce restaurants, offering traditional Italian-American fare at very reasonable prices. For lunch I ordered a slice of the vegetarian special, topped with fresh mushrooms,  olives, onions and green peppers ($3.75), and a bowl of the rich and flavorful tomato basil soup. On a return visit in the evening, we dined in Jakeeno’s enclosed patio, where a neighborhood cat provided excellent company, in return for a few table scraps. She seemed to particularly enjoy the lightly seasoned, moist and tender meatballs (two for $2.25), as did I. 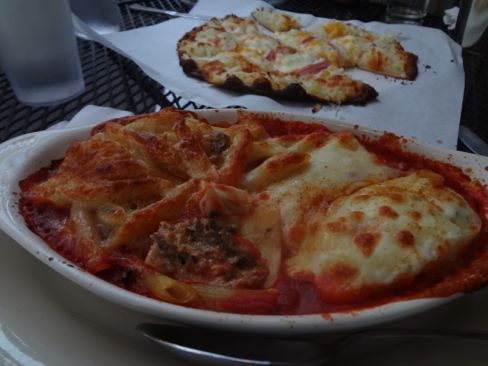 We couldn’t actually detect any rosemary in Carol’s rosemary potato pizza ($12.79/$17.94/$19.79), but as our server helpfully pointed out, there was a pot of fresh rosemary decorating our table, so we tore off a few springs, sprinkled them atop the pie, added a little salt, and the result was quite acceptable. I also ordered the pasta combo — penne pasta, canneloni stuffed with mixed vegetables, and a pasta shell stuffed with ricotta, mozzarella and romano, available with your choice of sauce ($9.50-$10) — tasty and filling. If I return, it will likely be on a Monday, when Jakeeno’s features all the spaghetti you can eat for $6.99, or a Tuesday, when the special of the day is a large two-topping pizza, garlic cheese bread and a liter of pop for $19.99. Jakeeno’s offers two happy hours daily, from 4 to 6 p.m. and 8 to 10 p.m., with 2-for-1 beers, half-price wines, and $2 off on appetizers.