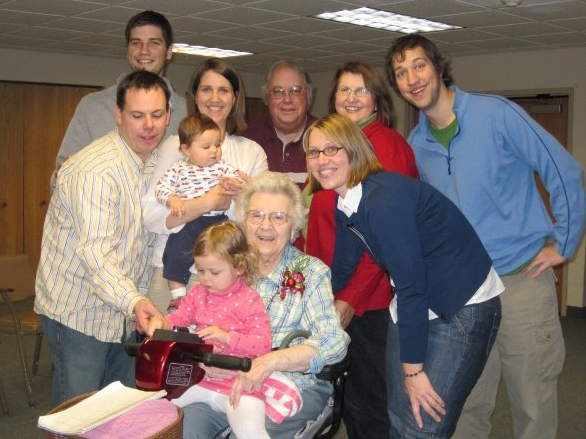 NEW ULM, MINNESOTA—As I write, I’m sitting on a balcony under a white drop-panel sky, overlooking the ersatz Bavarian street that is the hallway of the New Ulm Holiday Inn, with a German flag hanging over the Rhine and Danube conference rooms. In just over an hour, the alarm will ring and we’ll get dressed to lay my grandmother Rosalie Grossmann to rest.

This funeral comes in the middle of a week filled with shows I’m reviewing, and it occurred to me that I might write something about the funeral as well. A funeral isn’t something to be “reviewed” (well, not by me), but like a play or a concert, a funeral is a moment when we step outside our normal lives to participate in a shared ritual and reflect on larger, deeper questions than those that normally occupy our days.

I won’t be the millionth writer to quote F. Scott Fitzgerald’s famous dictum only to call it wrong, but suffice it to say that my grandmother’s American life had three full acts.

The first act began with her birth in 1919, oldest of three children in a family farming land near New Ulm. Born into a world where women in the United States were not yet guaranteed the right to vote, she completed high school—a point of pride to the end of her days—and met my grandfather Harold. Together they founded their own family farm near New Ulm, and in 1945 my grandmother gave birth to my uncle (and godfather) John: the first of six children, with my mother Jean being the third. At the wake last night, my uncle Jim reminisced about his boyhood on the farm, remembering his father asking him to drive the family tractor even after Jim had an accident and drove the tractor through a fence. “You can do this,” Jim remembers his father telling him. “I trust you.”

The second act of my grandmother’s life began abruptly in 1961, when my grandfather died of cancer. Quickly realizing that she couldn’t maintain the farm on her own—even with the help of my uncle John, who left high school to support the family—Grandma moved the family into town. At last night’s wake, neighbors spoke with awe about the strength she showed in raising those six children as a single mother, supporting not just her own children but also the families around her. “I couldn’t have done it without her,” said a younger single mother who lived near my grandmother on (of course) German Street.

Grandma’s youngest child, my uncle Jeff, went off to college in 1979, inaugurating the long third act of my grandmother’s life. She would live for 31 more years, continuing to support her family and her increasingly elderly friends. When she was still driving, she would take friends who weren’t as mobile to the grocery store or doctor’s office. A priest who would visit the assisted living facility where my grandma eventually moved remembers her as a “floor general” at religious services, making sure everyone had missals and everything else they needed. Until the point this spring when her health began to seriously fail, she remained a leader and a mentor in her community.

Listening to my family members and my grandmother’s friends reminisce, for the first time it occurred to me that sociologist Emile Durkheim’s equation of faith with community doesn’t have to be a heresy. Faith runs deep in this German-Catholic community, and it manifests itself in the care its members show for one another, in the principle of shared responsibility passed down through generations. There was talk of my great-grandparents, and even of my great-great-grandparents, who came from the time when New Ulm was still an immigrant enclave on a dangerous frontier. It’s hard to imagine the struggles they faced. Even as the United States clashed with Native Americans in devastating conflicts from which we still bear scars, the new settlers struggled to carve out a stable existence for themselves in the face of a harsh climate and social fault lines that they weren’t always on the safe side of. (My dad’s father used to talk about the days of his boyhood, when the Catholic-Protestant divide in rural Minnesota was cause for pool cues being broken over men’s heads.) They didn’t have much, but they had each other. 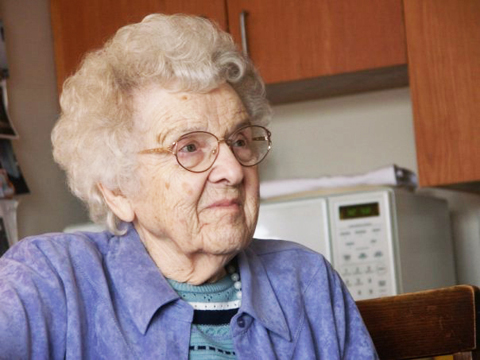 For all her unique spirit, my grandma’s virtues of courageous grit and loving care were, I see now more clearly than before, of a piece with the community she came from, and remained in. As my mother and all five of her siblings left New Ulm for the excitement (and job prospects) to be found elsewhere, there was discussion of whether Grandma should move to the Twin Cities, where she could be closer to her children—but it was always clear that Grandma belonged in New Ulm, the community from which her life came and through which it ran.

After a lunch (or as they say here, a “dinner”) in the church basement, we’ll get in our cars and drive back to the Cities: back to our busy lives, which we’ll try to live with the same integrity, empathy, and good humor we learned from our mother, our grandmother, our great-grandmother. “You can do it,” she might say. “I trust you.”