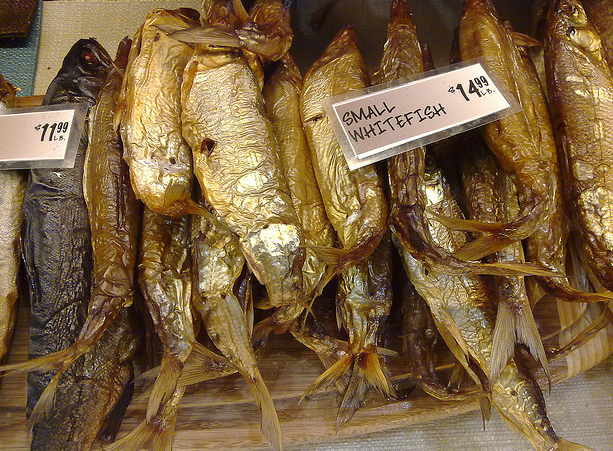 Whether we like it or not, food plays an incredibly intricate part in what it means to be Jewish. From kosher laws and the Passover seder to knishes and latkes, our heritage is intertwined with food.

In my family, food is not only at the center of of our Judaism, but also our lives in general. Sure, we had big holiday dinners at Grandma’s house. And we ate a lot of Chinese on Sunday nights. But we also went out to eat for every birthday, anniversary, and graduation.

Then of course are the other Jewish ritual eating experiences: weddings, bar mitzvahs, brises, baby namings, and shiva calls. We like to eat and we love a good spread.

That is why I associate much of my Judaism with acts of eating. It is no surprise that the biggest Jewish influence in my life was also the supplier of many of those acts: my grandma.

As with most Jewish grandmothers, mine was obsessed with making sure I had enough food to eat. When I would go to my grandma’s house, the first question was never “how are you?” – but rather, “are you hungry?” or “can I get you something?” If my grandma was eating her own lunch and I happened to stop by, she would offer it to me before taking a bite. Or if we were out for one of those special occasions and she ordered shrimp scampi (her guiltiest pleasure), she would pass those little non-kosher nuggets of joy around the table without even thinking about it. Often times, I would remind her that there were only 5 shrimp on the plate and she gave away 4 of them.

Among many other things, my grandma is solely responsible for my adventurous eating habits. From a very young age, she would introduce me to exotic fruits. It became one of our things. Hang out with grandma and I would get to try a persimmon (even better if they were Israeli persimmons).

In addition to the produce, my grandma introduced me to the Jewish foods that I never ate at home. My dad is all meat and potatoes. My brother is just meat. So if I wanted anything else, I had to head over to grandma’s. I remember trying liver at my grandma’s house for the first time (loved it and still do). Something as simple as steamed cabbage – yum. And those turnips used for the chicken soup? Delicious all mashed up.

But if there was one thing that I absolutely craved it was smoked whitefish. Those gold and slimy fish hanging out in the appetizing case were an old person’s delight. Little kids don’t beg their mothers for smoked whitefish. Well I did – but my mother wouldn’t buy it because either she didn’t want to handle it or because I was the only one in the house who would eat it. So if I wanted it, to grandma’s house I would go. 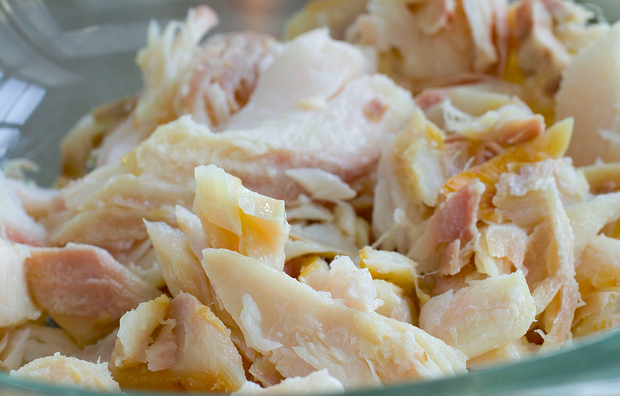 My grandma would take the meat off the bones and run her hands through it to make sure no strays were left. I don’t ever remember eating a bone. Every little piece of meat was stripped. Then she would run a fork through it to mash it up a little. And alas, I would enjoy my smoked whitefish. No bagel, just a fork and a plate of smoked fish.

Fast forward to 2011 and a small smoke house in Duluth, Minnesota. The Northern Waters Smokehaus makes the most delicious smoked fish (in addition to bison pastrami and a host of other delectables). When a colleague informed me that she was heading up to Duluth for a weekend, I put in an order.

So a couple of weeks ago, I had in my possession a large smoked whitefish. And while nicely wrapped it was starting to stink up the fridge. So after a middle-of-the-night baby feeding, I headed down to the kitchen to see what I could do. I think it was around 2:30AM. I took out that fish, unwrapped it, and started to pick the meat off the bones. My wife came downstairs in a sleepy daze and just looked at me like I was insane. She headed back to sleep and I continued with the fish. I wondered what grandma would think of this fish from Duluth.

As I stood over the counter working the fish, I could have sworn I was an 8-year old kid, sitting at my grandma’s kitchen table, counting the flowers on the wallpaper, and waiting for lunch.