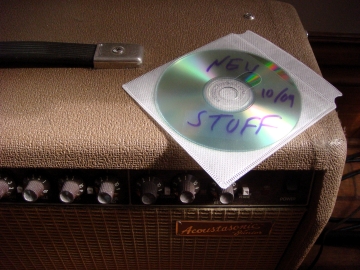 Over and over, at this or that club, I’ve had the same conversation with musicians, singers and band members. “You got a disc I can listen to?”, I’d ask. “No,” the reply would come, “just a demo.” I would give the individual a look that, while not entirely unkind, did question his or her common sense.  You don’t need a finished product, complete with sweetening and all the sweetened bells and whistles, before you have something to listen to. Any music writer worth his or her salt understands that. If you’ve got ability (i.e. performing and songwriting chops), it’ll be evident. The smartest thing you can do is answer, “I sure do.” Any time a writer comes to you, instead of you pitching them with a cold-call in the mail, the chances are your disc will get played a lot sooner than will something they didn’t ask for and have to add to the bottom of stack they’ve already been trying to get through.

For instance, this rock-punk-funk group Toast had the right idea. During a Sunshine Behavior show at the Cabooze, they left copies of their demo on all the tables with their MySpace URL written on it along with the words “pass on to a friend.” It’s hard not to pay attention to someone with that kind of initiative. Talented weirdniks the Screaming Cherry Blossoms did the same thing at the Cabooze (I forget for which show) and, quite honestly, they need to try everything they can to build a following. After all, how many radio stations or club owners are going to warm right up to a trio that bills itself as playing rock, experimental, and Japanese classic music—no matter how good they are? Give ‘em a look-see and listen at their Web site (where you can, in fact, download songs from their very interesting demo).

Amazing soul and jazz vocalist Sam Kuusisto, compelling acoustic rocking Kymara, R&B powerhouse The New Congress, alt-rock aces Sunshine Behavior—these are all acts I’ve had a chance to cover (each long before they were written about elsewhere) simply because, when I asked for something to listen to, they promptly put a disc in my hand.

I doubt, to this day, that Sam the Man has finished the album he was working on those few years ago (he strikes me as an incurable perfectionist). But, along with word of mouth from hellified club performances, the exposure he got from readers of my old publication sure didn’t hurt the head of steam that now has resulted in such success the guy is booked solid through, as of this writing, clear through to the first week of December. And the couple of times we’ve crossed paths since then, he’s been glad to give me a ruff of what he’s doing in the studio. Singer-songwriter Shannon Johnson (who really is Kymara) responded to my Internet query and sent a demo of the band’s first EP. I’ve been writing about Kymara ever since. Johnson clearly sees some value in it. One night at 331, she, bass player Nate Cole and a few other folk were hunkered down over drinks, waiting for Alicia Wiley to come on when the subject of what Kymara’d been doing in the studio came up. We agreed that I should give it a listen, a consensus about which the lady was most emphatic. I suggested she sit and enjoy herself, that there was no need to get it to me right that minute. Well, you haven’t truly been stopped dead in mid-sentence until you encounter Irish eyes that decidedly are not smiling. “I’m going out to my car and get it”, she informed me. I responded to this woman, who is about half my age, with a very meek, “Yes, ma’m.” A write-up on the material is at Kymara’s blog.

To be sure, it doesn’t always pan out. I’ve been given demos out of which Jimmy Jam, Terry Lewis, and Phil Spector combined couldn’t make a silk purse. The finished disc, no matter how well-recorded, would be best used as a Frisbee or drink coaster.

The point is, they’re called demos for a reason. Demo is short for demonstration tape (from back when you put discs on a record player). If you’re not going to use a demo for that purpose, well, why’d you record it in the first place?