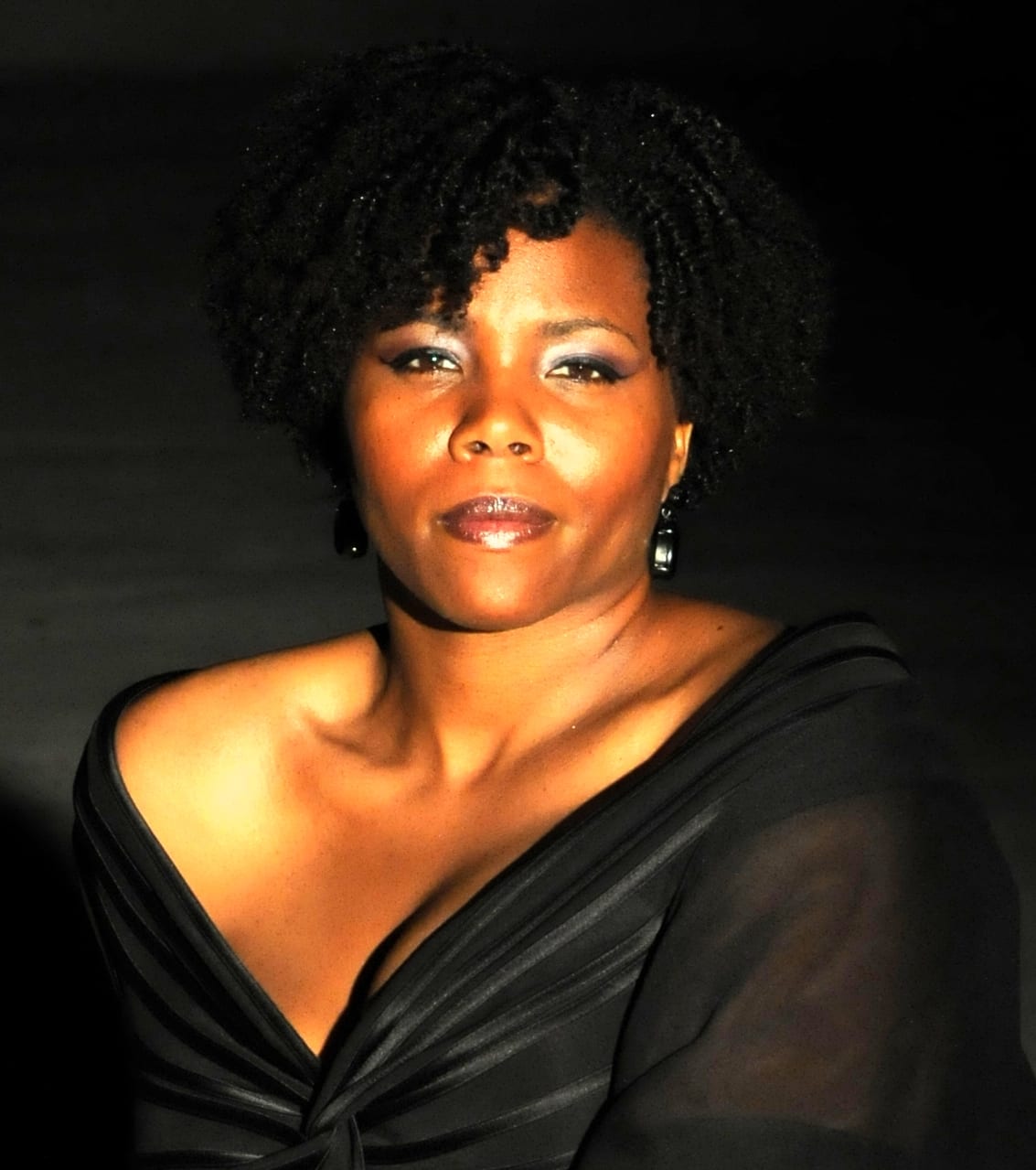 I’ve been covering the splendid smooth jazz/neo-soul combo Wenso Ashby featuring Zsamé so long I forget when and how it started. For all the reviews, though, and interviews with Wenso, I’ve yet to nail down for print a conversation with the illustrious Zsamé. Until now.

I often make it to Favor Cafe in South Minneapolis, a classy, low-key establishment where you find cocktails, conversation, and soul cuisine. And, when Wenso Ashby featuring Zsamé grace the place, sweet strains of magical piano behind velvet vocalise. Often, ace saxman Willie Moore is there with them. Tonight, they are in customary excellent form. As always, I’m mesmerized by Zsamé. She is world-class, the perfect fit to front this ensemble, and it’s clear why Ashby determinedly pursued her back in 2004, would not rest until she agreed to step on board. Her range is strong, tonality pinpoint. Her palette of textures and natural gift for nuance mark the subtle mastery of a true siren. And, she’s gorgeous—which, face it, is as much a requisite in entertainment as talent. Bottom line, the Lady Z is a break-the-mold center of attraction.

Zsamé also is a very busy lady, but, between gigs and running back and forth to visit family and friends in hometown Chicago, she made time for a conversation at Señor Wong’s in downtown St. Paul.

Wenso Ashby featuring Zsamé are no longer doing their weekly thing for the Urban Jazz Suite at Favor Cafe. What’s up with that?
We have some other projects in the works. And we’re back recording our [new] CD. That takes up a good deal of time, being in the studio.

How long did you do that gig?
Since before the Favor Cafe was the Favor Cafe—when it was still Restaurant Miami. So, I think that’s been about two years now. They started off catering on Sundays and Mondays and we were doing a Sunday jazz brunch. We kind of transitioned that into the Urban Jazz Suite, did that for about a year. We took a couple of months off when we started working on the CD and then we started back with a February Valentine’s weekend gala. We had a great time doing that.

What’s the new album called?
I think Wenso [has] a title. I don’t remember what it is. It’s a temporary title. I don’t know if it’s something he’ll keep. We’ve been working on the instrumental tracks quite a while and I just laid down the first vocal. It’s on the Butterfly label, which Wenso is signed to, that’s headed up by Bob Huber and based in Minneapolis. I think the goal is to have it done before the end of the year.

When he was a solo artist and producer, Wenso was real insistent about working with you. Didn’t have your contact information, but hunted you down practically with bloodhounds and radar. I mean, he seriously was a man on a mission.
He heard me on KMOJ for a commercial that I’d [sung on]. I wasn’t singing [club dates] or anything at the time. So, when we met and I had the opportunity to audition, I was just kind of testing it out to see if it was something I wanted to get into. I hadn’t really thought about whether I wanted to sing. Even though I was a house diva, just singing around the house.

What convinced you join up with Wenso? Was he trying so hard to get you that you just took pity and said, “Okay”?
No, not at all. I loved the music he was playing. I thought it was a great match. He was very patient with me, because I didn’t have any experience performing. He provided that platform to me to learn how to perform [and] to interact with the crowd. The entire art of being on the stage: I didn’t have any of that before I started performing with him. He [gave me] the education. You need to be engaging with your audience. Some of it was natural, of course, but he has instructed me. I was not necessarily an outgoing person. When I was growing up, I was kind of the bookworm.

No kidding?
When I auditioned I had purchased his music and I really liked what he was doing on his Midnite Walkin’ album. When I started singing with him, he had another vocalist, TaVanni. And I started off singing backup. She ended up going to school and I kind of accidentally transitioned into being the lead vocalist. When I began with Wenso there wasn’t any timeframe [determining] how long I would do it, perform or any of that. It was just sort of come-what-may. Now, here we are six years later, working on our third CD together.

You are a great admirer of Sade.
Yes.

Why?
She just has a timeless voice, a timeless quality. There are [stronger] vocalists, but she has something that’s very calming to me about how she sings and how she says what she says. She’s very sensual. She’s able to say sensual things in a way that doesn’t catch people off guard and put them in a bad or a nasty frame of mind. I like that. In some regards I fashion myself after that. I like to be sensual on the stage, but I don’t like to be nasty or to be overly suggestive.

Who are your songwriting influences?
I can’t really say that I have any. When I sit down to write, it’s usually about something that happened to me personally or a message I want to share. I have a lot of vocal influences. I love Mariah Carey, who I grew up with. Whitney Houston. The Dreamgirls soundtrack.

Sheryl Lee Ralph and them.
Yeah. I’ve always loved Anita Baker. Mostly the people that were popular when I was in high school. My sister, Queenie. She goes by the stage name Q’aisha; she sing with me on the live CD and wrote “Keep Dreaming” from the After Dark CD. She’s my baby sister. She’s my heart.

You have a solo CD in the works.
I worked on a few songs with Keith Porter, also known as Father Time. I may at some point introduce those into performances with Wenso. Right now, I’m not doing anything with them. I have an album from a while ago, before I met Wenso, that I recorded at Flyte Time with Reggie Henderson of Third Eye Entertainment. He and Xavier Smith. Wenso let me sell copies at our first few concerts together. I was shocked that people were buying them.

Well, you’re like that. Plenty artists with half your ability strut around like their you-know-what don’t stink. But long as I’ve known you, you’ve always been down to earth. Even modest.
I can thank my parents for that.

What’s up next?
We’re recording the new CD. We’re going to be performing over at Om on Fridays in downtown Minneapolis. Starting, I think, at the middle or end of July.

Looking forward.
Thanks. I am too.