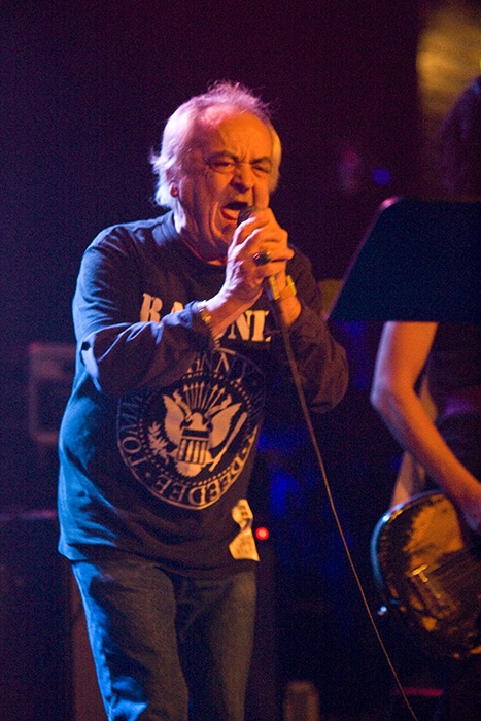 First Avenue and the 7th Street Entry were full of ecstatic music lovers on Friday night, as both stages featured local artists paying tribute to the Replacements. The concert commemorated the 25th anniversary of Let It Be, a record that regularly appears on critics’ lists of all-time greatest albums (despite the fact that the album only recently made it halfway to gold-record status); and the paperback publication of Jim Walsh’s book All Over But the Shouting: An Oral History of the Replacements.

The Entry was packed all night with fans stretching their necks for a glimpse of acts like Stook!—who appropriately bellowed through a flurry of ‘Mats covers like Johnny Cash strung out, wound up, and about to collapse—and Patches and Gretchen. The Mainroom lineup included Gospel Gossip (who reprised some of their Replacements covers the following night at Sauce) and Lookbook, who ended their set with a majestic, haunting performance of “Little Mascara.”

At the evening’s conclusion, an all-star lineup of performers calling themselves “the Let It Be House Band” played the classic album from start to finish as local favorites took turns on lead vocals. Punk legend Dale T. Nelson brought down the house with “Tommy Gets His Tonsils Out,” Caroline Smith cooed “Androgynous,” Josh Grier of Tapes ‘n Tapes sang “Black Diamond” (a KISS song covered by the Replacements on Let It Be), and, in an appearance that was a surprise to anyone who hadn’t picked up First Ave’s Twitter hints, Dan Wilson took the stage to play the poignant album closer “Answering Machine” while dVRG of Heiruspecs played an audio loop from his iPhone.

For an encore, the glowing Walsh (a performer in his own right who leads the Hoot series of local-music showcases) took the stage to sing “Waitress in the Sky” and to promise a repeat of the event next year—the 25th anniversary of the Replacements’ major-label debut Tim.