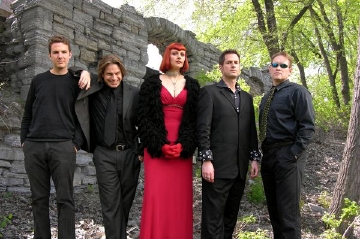 Sometime back, when I first heard premier poet Chris Shillock had become part of a band, Invisible Jazz, fronting it with vocalist Tabatha Predovich, my first reaction was “Why?” What on earth, I wondered, did Shillock—a brilliant writer and natural born orator with a rich baritone quality that instantly commands your attention—what in the world did he need with a band, sharing center stage with some singer? Then, I caught Invisible Jazz at Patrick’s Cabaret and enjoyed a very pleasant surprise. For one, Predovich turned out not to be just some singer. She’s has an intriguing voice that brings old school San Francisco rock to mind. Shillock recalls working with her in Invisible Jazz. “Her talent came with a commanding stage presence. After listening to Tabatha go through some of my poems, turning them into songs, I couldn’t believe my good fortune. Hers was a voice that growled with passion, curdled with cynicism and flatlined in contempt. Her phrasing was so clear that every verbal twist I wrote became intelligible.”

Tabatha Predovich now fronts the band UZZA, formed back in March. She’s joined by Rich Patterson (guitar), Chris Ginther (guitar) Geoff Maas (bass), and Brandon Nessen (drums). For their Sunday gig at Tillie’s Bean on Nicollet, Chris Shillock will be on-hand as the special guest. It should be, to say the least, an interesting evening. The press release describes UZZA as “a moody, musical monster with an impressive repertoire that ranges from the manic to the melancholy. Their songs are generally dark and deal with subjects like paranoia, psychosis conspiracy theories and, you guessed it, suicide! While some may smack of sarcasm, others are surprisingly heartfelt. But each track in UZZA’s jukebox of doom is a gloomy gem, meticulously crafted and performed with taut, muscular swagger.”

So you and Chris Shillock are doing double duty with both Invisible Jazz and UZZA?
Yes, the songs Chris and I created and performed together need to be shared again with an audience. Chris writes such deep, beautiful and relevant poetry, I want other people to hear it and appreciate it. Because UZZA is also dark and compelling, but different from Invisible Jazz, I think the two will complement each other. I look at it as a “get ready for Halloween” show.

How and why was UZZA formed?
My husband Rich Patterson and I write the music. Rich will come up with basic chords on guitar, with a verse and chorus for me to write over and structure, or I’ll write a whole song and give it to him so he can add his special magic to it. My songs start out as improv pieces and he is able to convert them to guitar and bass. I used to use analog equipment when I wrote, which was very time consuming, but now there’s a program on my Mac called Garage Band that makes writing a lot easier.

Okay.
I [placed] an ad looking for musicians. I guess our music isn’t for everyone; it’s very in your face, dark and sometimes sarcastic. Eventually, we found three very talented and great musicians, who actually like what we are doing. UZZA was formed to keep me sane. I need to write and perform because I am very introverted and tend to bury my emotions inside. Performing is therapy for me and I get depressed without it. I think I rub people the wrong way sometimes. they don’t get what it’s about and think I’m crazy or angry, but really I’m just trying to entertain the audience and give it my all, almost like acting. Some of my favorite performers are intense and passionate, they make me feel something, and that is my goal. If one of my songs touches your heart and you can relate to it, or makes you smile with sarcasm, then I’ve done my job.

You and Chris have worked together off and on for how long now?
I believe I met Chris in the winter of 2004. Rich and I had just moved to Minneapolis from Detroit. I found Chris very intriguing; his background in politics and his views were of great interest to me. After I read his poetry, I was hooked. Also, I looked at it as a challenge. I’m used to writing and singing my own lyrics, but it was actually quite easy to work with Chris’s words and now they feel like a part of me. I greatly admire him.

What are some of the other bands you’ve been in?
I was in my first band when I was 15, called Yana. We did mostly Duran Duran covers. After that, I was in an English pop band called Elysium in Brighton, England, which followed a Goth band in Detroit called Radium, and I have my improv solo project called Velvet Rat, which is more like noise landscapes mixed with creepiness.

How is it working with your husband in the same band?
It’s great working with my husband. He knows what I’m looking for in a song and understands my writing style. The only problem is we’re both control freaks, so we have to compromise on things occasionally. He’s more traditional where I tend to be more experimental. We’ve been together almost 10 years, no divorce yet!

Are you in the studio working on any recording projects?
We are going into the studio in late November. We’re working with producer David Stevens of Sound Storm Productions. The studio is beautiful and we’re excited to experiment with our sound and to work with David.

What’s next?
We have some fantastic shows coming up with bands with we greatly admire. Details are on our Web site.