Full disclosure: I didn’t do my homework before going to see Art Brut at the Triple Rock on Monday night. I knew what they sounded like, but I didn’t know what they looked like. So when I saw a short, skinny guy with spiked hair, big glasses, and a devilish grin emerge from the band’s trailer before the show, I assumed it was frontman Eddie Argos. Nope—it was a roadie.

Eddie Argos, it turned out, was a big guy in a brown suit who alternately shouted and cooed, looking and acting like a cross between Morrissey and Fred Schneider. Art Brut’s set unfolded less like a string of songs than like an extended monologue by Argos, who sipped his pink coctail and spoke-shouted over the band’s din like Dean Martin trapped in Pete Doherty’s life.

A friend of mine who saw Art Brut’s last Minneapolis performance said that this was a far better, stronger, more confident show. They certainly ate up the near-sellout crowd’s adulation, especially that of a few jumping, screaming men and women in front of Argos who looked like they’d been placed there by central casting. The band’s sound, clearly by intention, is a thrashing wall that’s not quite opaque enough to mask the formidable fretwork of lead guitarist Ian Catskilkin. Mikey Breyer, appropriately, bashed the skins from a tall stool that put him in a near-standing position. 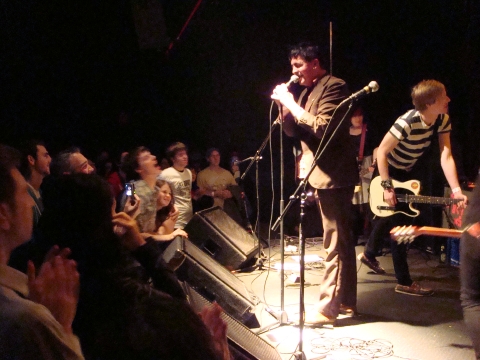 The enthusiastic crowd (by the end, fists were pumping even back by the bar) was in no mood to choose favorites among songs drawn from the band’s three albums, but they seemed to respond especially affectionately to “Alcoholics Unanimous” from the band’s new album Art Brut vs. Satan and to “Bad Weekend” and an unfortunately rushed “Emily Kane,” both from 2005’s Bang Bang Rock & Roll. It was interesting to learn that the actual Emily Kane—a childhood sweetheart of Argos’s, about whom he obsesses in the song—called Argos up after hearing the song about her, but I have to admit I was disappointed to learn that she has a boyfriend, he has a girlfriend, and everything’s cool. Where’s the drama in that?