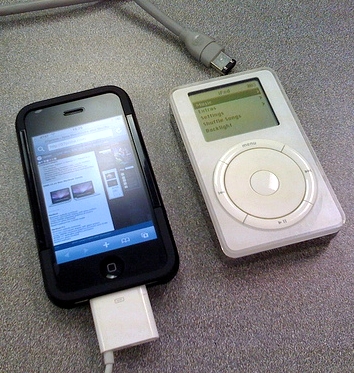 I’ve had this list kicking around for a couple of months, and in the meantime every other music writer on the Internet seems to have created his or her own list of the decade’s best albums. I just pulled up Pitchfork’s top 200 list and ran over it to see if I’d made any egregious omissions; the exercise did result in my new album #10 bumping Green Day’s American Idiot, but beyond that my list remained the same. What surprised me most was how many of my top ten albums weren’t even in Pitchfork’s top 200. Seriously, they couldn’t bump just one of those Joanna Newsom albums?

Anyway, here’s my list: as subjective and debatable as any, and naturally biased by my typical listening habits. Most significantly, the list has no hip-hop. I do listen to a fair bit of hip-hop, but this is a list of albums that really connected with me emotionally—my desert island discs for the decade—and much as I admire The Blueprint and Miss E…So Addictive, for me those will always be once-in-a-while discs. Is that because I’m a middle-class white guy from St. Paul? Yeah, probably. I yam wat I yam, and these are my ten favorite albums released in the years 2000-2009.

10. Vampire Weekend, Vampire Weekend (2008). As noted above, this spot was initially occupied by Green Day’s American Idiot, a great album that sounds like a Great Album. Vampire Weekend just sounds like a lot of fun—but it’s solid fun from the first track to the last, and incredibly creative to boot. The transparent arrangements sound completely coherent and deceptively simple, but the repeated listens this album begs reveal depths of invention. Brilliantly, the Ivy Leaguers make an end run around the preppy stereotype by embracing it, dropping references to Cape Cod and Louis Vuitton into genuinely heartfelt songs. Just because you’re born into privilege doesn’t mean you’re not also born to run.

9. Girl Talk, Feed the Animals (2008). The apotheosis of the mash-up. The phylogeny of the sound-collage genre is replicated in the ontology of Gregg Gillis’s career: his first albums incorporated samples into abrasive and self-conscious aural experiments, but by 2008 he’d realized that by cutting out the computer squawking and replacing it with more sweet samples, you’d lose the respect of a couple of eggheads while gaining the respect of tens of thousands of sweat-soaked clubgoers. Kurtis Blow had the insight to cut out everything but the breaks; Gillis turned that formula on its head and cut out everything but the hooks and choruses. If you can hold a conversation over this album, I fear for your soul.

8. The Avett Brothers, Emotionalism (2007). I appreciate that this is the darkest horse on this list, and the least consistent: among its 14 songs, several are unremarkable. The rest, though, are heart-stopping: “Die Die Die,” “Shame,” “The Weight of Lies,” “Will You Return?”, “Pretty Girl From Chile.” Lyrics this heartfelt and plain-spoken can be embarrassing, but when they’re supported by melodies and performances as strong as these, they melt cynicism like water over a witch. All the more remarkable is that this is an idealistic album about a bitter breakup. “I Would Be Sad” contains the album’s most telling verse: “My dad told me, one day, son, this girl will think of what she’s done, and hurting you will be the first of many more regrets to come. And he said if she doesn’t call, that it’s her fault and it’s her loss. I say, it’s not that simple, see…but then again, it just may be.”

7. R.E.M., Reveal (2001). The consistent underrating of R.E.M.’s Up (1998) and Reveal baffles me. Both albums contain some of the group’s strongest songwriting and most impassioned performances; the departure of founding drummer Bill Berry seems to have inspired the remaining trio to experiment with moody and original arrangements that give these two albums a distinctive character in the band’s rich discography. The albums are also accused of being dour, which might apply to Up but not to the sunkissed Reveal, with “Imitation of Life” propelled by chiming guitars and “The Lifting” by swirling synths. In one interview, frontman Michael Stipe expressed his dumbfoundedness at the neglect of this album. “‘I’ve Been High,'” he said, “should have been a number one track all over the world.” I agree. What more does the world want?

6. Bon Iver, For Emma, Forever Ago (2007). The decade’s triumph of tone. In the now-legendary cabin retreat that produced this disc, Justin Vernon seems to have managed to have directly digitized his own chilly bloodstream. The lyrics are at best obscure, at worst absurd (“I’ll be holding all the tickets, you’ll be holding all the fines”), but all they need to do is not distract from the album’s impossibly poignant soundscape. Vernon’s success captivating massive audiences with live performances of this intimate material speaks to the songs’ strength and to his skill as a performer, but having seen one of Bon Iver’s Turf Club shows, I find myself in agreement with Glenn Gould, who believed that sometimes the best performer-to-listener ratio is that found only in the recording studio: “one to none.”

5. Lily Allen, Alright, Still (2006). Producer Mark Ronson enjoyed a very hot minute in the middle of the decade; Amy Winehouse’s “Rehab” became his most inescapable U.S. hit, but for my money, Alright, Still beats not only Winehouse’s Back to Black but also Allen’s follow-up It’s Not Me, It’s You, which saw Ronson (amicably) replaced by Greg Kurstin and was widely regarded as an artistic advance on Allen’s spunky debut disc. Alright, Still is completely irresistible, with Allen hanging her sweetly cheeky verses on Ronson’s burnished hooks. The first Allen song I encountered was “Alfie,” which I had to keep listening to because I couldn’t get my head around it: it was unapologetically a joke and a pastiche, but it was just too good to be a novelty song. The whole album is that way: it’s a lark, but it’s also too good to be a lark. I still can’t get my head around it, and I’m still listening to it.

4. Bob Dylan, Love and Theft (2001). After Dylan’s swamp-soaked 1997 epic Time Out of Mind, this album at first sounded slight: its opening track “Tweedle Dee and Tweedle Dum” made you brace yourself for another Under the Red Sky. But at the distance of nearly a decade, Love and Theft sounds like Dylan’s most energetic, wickedly comic release since Highway 61 Revisited. There’s more to life than wicked comedy, and few would trade Love and Theft for Blonde on Blonde, Blood on the Tracks, or even Time Out of Mind, but it’s a vastly entertaining disc with the 60-year-old artist working at the height of his powers. In the barnburning “Summer Nights,” he even drops a sly reference to a line from the greatest novel by his fellow disenchanted Minnesotan, F. Scott Fitzgerald: “He said, ‘You can’t repeat the past.’ I said, ‘What do you mean you can’t? Of course you can.'”

3. M.I.A., Kala (2007). A hook from the Clash’s “Straight to Hell” anchors “Paper Planes,” M.I.A.’s breakout single from this album, and that’s entirely appropriate given that the Clash provided just about the only thing like a blueprint for the fiery, politically-charged, genre-trouncing dance party M.I.A. delivers on this album. Kala hammers the last nail into the idea that ProTools can’t be as devastating an instrument of creative expression in pop music as a Stratocaster or a Hammond B-3. The mid-tempo “Paper Planes” is about as close to a slow jam as this album comes: it sounds like an hourlong reveille call, serving notice to the world’s haters that their days are numbered if Maya Arulpragasam has anything to say about it.

2. Billy Bragg and Wilco, Mermaid Avenue Volume II (2000). The decade’s second-greatest album, and it’s only half an album. Not since the last years of the Beatles has so much personal rancor resulted in so much musical splendor: while it seems to have been more or less by coincidence that Woody Guthrie’s daughter ended up inviting three of music’s biggest egos (Billy Bragg, Jeff Tweedy, and Jay Bennett) to share a studio with her father’s lyrics, it was apparently a coincidental stroke of genius, because both of the resulting albums are absolutely luminous. The songs on this album were technically the leftovers from the first Mermaid Avenue disc (1998), but they are no less strong, with Bragg and Tweedy both contributing their most impassioned performances on record, with the benefit of Guthrie’s priceless lyrics to boot. Together, the two Mermaid Avenue discs make up one of the all-time great albums; on its own, Volume II is still one of its decade’s best.

1. Tegan and Sara, So Jealous (2004). Bruce Springsteen is regarded by many to be rock ‘n’ roll’s last great true believer. In fact, that torch has been passed—and not to any of the soundalike Heartland rockers who’ve tried and miserably failed to remake The River, but to a pair of diminutive twin sisters from Canada. Tegan and Sara don’t really sound anything like Springsteen, but with So Jealous they took the Boss’s anthemic heart and married it to the tart snap of indie-folk acts like Ani DiFranco (who they once did sound exactly like) in an album that hits with remarkable sonic power. “You Wouldn’t Like Me” is one of the best-ever album openers, building in two minutes from insistent rhythm guitars to a thundering wall of sound; it sets a level of intensity that the album maintains for its entire duration. In songs mourning (“Where Does the Good Go”), pleading (“Take Me Anywhere”), and caring (“Fix You Up”), phrases are repeated like incantations, the sisters seeming to search for answers that are nowhere to be found. It’s terribly bleak, but utterly inspiring—two qualities that defined the decade of its release.