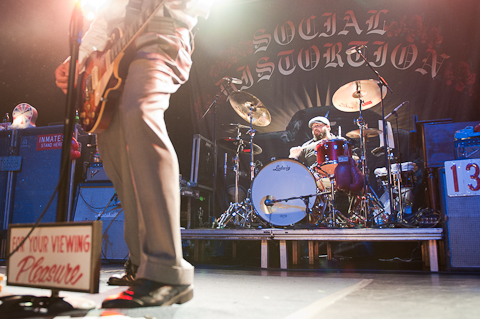 20 years after it was first recorded, Social Distortion‘s cover of the country classic “Ring of Fire” sounds like one of those eyehole moments in music—like Mozart’s Haydn Quartets or George Gershwin’s Rhapsody in Blue—when an entire body of music is completely digested and integrated into the coming wave. Neither punk nor the claiming of Johnny Cash as an icon thereof were anything new by 1990, but the record is a hard diamond of noisy perfection, finishing the job started by the Ramones and others while pointing towards the alt-country movement to come.

It’s a job that, 32 years after their founding, the California band are still doing. Frontman Mike Ness—the band’s only constant member—and his bandmates ripped through their set Tuesday night at First Avenue with, by all accounts, the same volume and velocity that’s characterized their shows since the Carter Administration. There’s something to be said for bands that follow a more discernable musical progression, but Social D are very much a case of if it ain’t broke, why fix it?

Social Distortion’s sound is a timelessly paint-peeling fury of major chords and minor threats. With his nasal yowl and pugnacious features, Ness was born to be a punk rocker—one imagines him emerging from the womb with full-sleeve tattoos. What Ness and his bandmates do with electric guitars is what I’ve always wondered why everybody who achieves some facility with the instrument doesn’t eventually do. Do they not realize the power of that machine they hold?

I was pleased to hear the band play no fewer than four songs from Between Heaven and Hell, the band’s 1992 commercial breakthrough, which was one of my favorite discs, as a teenager, to shake the foundations of my parents’ St. Paul house with. (Wikipedia reminded me of the reason why I bought it: Bruce Springsteen named it as his favorite album of the year.) Social Distortion’s cover of Jimmy Work’s “Making Believe,” which outdid even “Ring of Fire” in poignant feedback-drench majesty, was their Tuesday night sendoff before a three-song encore. Ness was gracious to Minnesota, but didn’t kiss up; he thanked the audience for being kind when “we’re a long way from home” and made reference to a set of “hillbilly relatives” living in Minnesota.

Accompanying Social Distortion were a pair of high-profile openers: first Frank Turner and then Lucero. Turner was described to me as “a young Billy Bragg,” and he exceeded the expectations that description inspired with a high-energy set of tuneful songs populist in lyric and sound, backed by a raucous band and blessedly free of Bragg’s preachiness. Lucero failed to impress me; apparently their set on Tuesday was more laid back than their typical set, but as someone not familiar with the band’s discography, the songs struck me as undistinctive and the flourishes of instrumental color from keyboards and a steel guitar were cloying rather than evocative.