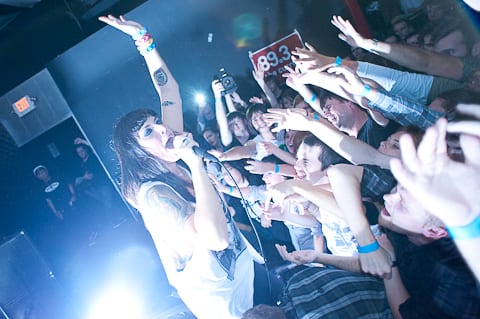 While one stream of popular music has been maturing over the past couple millennia, another has been immaturing. The first reached puberty with—what? Monteverdi?—and the second may have finally attained its spurting climax of primal devolution with Sleigh Bells, the New York duo who brought their shuddering eruption of pop to the Triple Rock on Monday night.

True to the gasping fumbles of adolescence, things were over quickly—under 40 minutes, by my estimation, including encore. That’s slightly longer than their entire discography, the album Treats, so really, they were indulging us. The very simplicity of Sleigh Bells’ sound makes them difficult to describe: boil any piece of pop music down to its essence, and you’ll have one or more of the four key elements of the Bells’ attack. Derek Miller provides the shuddering beats, screaming synths, and strutting guitar riffs; Alexis Krauss provides the keening, sweetly melodic soprano vocals. If Sleigh Bells’ compositions are more artfully arranged hooks and fragments than actual songs, well, screw it! We can listen to songs when we’re dead.

The Monday night crowd—an easy sellout—reacted with appropriate enthusiasm to Sleigh Bells’ frenetic strobe-lit set. Sure, most of the crowd stood still, but those attendees more than five feet back of the stage had courageously taken it upon themselves to carry the weight of the band’s cachet on their flannel-clad shoulders. It’s not an easy job, but someone has to do it.

In the opening slot most proximal to the buzzgasm was Pictureplane—a.k.a. Denver musician Travis Egedy, who aims to single-handedly achieve the basic Sleigh Bells formula except without the guitar or the we-will-rock-you stomp. Great or not, his set was certainly fun, which is a cardinal virtue for any opening act. (Pitchfork and Stereogum have blogged favorably about his 2009 album Dark Rift, making him an appropriate tour partner for Sleigh Bells, who attract fawning blog posts like David Cassidy used to get fan mail.) Adding significantly in the fun department was a backup—and front-up, and side-up, and ass-up—dancer clad in black bodysuit, mask, and fish net. Not fishnet stockings—fish net. She later emerged maskless, revealing a face whose prettiness seemed as inevitable as Levi Johnston’s turn to porn.

In retrospect, the chiming and melodic Sundelles, who opened the show, seem downright reactionary. I thought they were great, but then, a PG-13 movie seems pretty hot until you sneak into an NC-17.