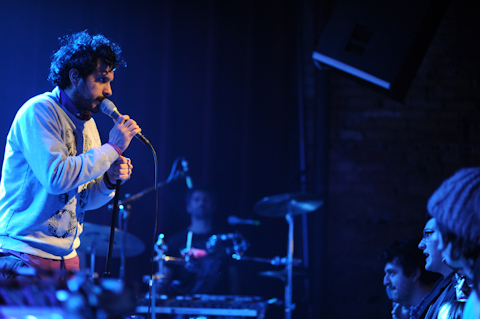 Why? was kind enough to bring its distinctive indie hip-hop sound back to Minneapolis on Saturday, February 23 for a show at the Fine Line with help from Radio K. In tow were openers Sarah Winters and local favorite Astronautalis, who have been on tour this month with Why? The three bands rounded out a near-perfect Saturday night of music in the Twin Cities.

Traditionally, an opening band is meant to heat up a crowd, but Sarah Winters was more of a salve to the crowd’s excitement about Why?. During her solo set—the stage drenched in red lights—Winters and her keyboard hypnotized the crowd into calmness, the sullen sounds of her songs drawing everyone’s attention to her like an ear magnet.

If Sarah Winters attracted attention to her set incidentally, Astronautalis commanded attention intentionally. A large personality on stage, Andy Bothwell and his crew—which included Oscar Romero on guitar and Chris Reisman on drums—cracked wise between his melodramatic songs, joking mostly about Romero moving to Minneapolis to be Bothwell’s Cosmo Kramer, and announcing that he only eats Blueberry Mornings cereal, and Chex, but not Rice Chex, “Because Asia. Yeah America!” His hair has a stage presence all its own.

A little after 8 p.m., Why? took the stage. A long time fan of their work, I wasn’t sure what to expect from a stage show, although a girl in line at the bathroom had told me, essentially, to expect miracles. “It’s going to be a little mind-blowing,” she said, and went on to discuss her number-one fandom. Why?, in the form that the world knows them now, has been around since 2004, and consists of Jonathan “Yoni” Wolf, Josiah Wolf, Doug McDiarmid, Liz Hodson. They’ve put out a solid number of albums and EPs in that time, the best of which, in my opinion, are Elephant Eyelash and Alopecia, although Mumps, etc.—the album for which they were touring—is growing on me immensely.

Why?’s set opened with “Crushed Bones” off of Elephant Eyelash, and it got me wondering what the crowd’s perceived “hits” would be. For a band that doesn’t get a ton of radio airplay, what songs do the crowd members, alone in their rooms or cars, decide are the best ones? Not surprisingly, there weren’t any songs that got a decidedly more fanfare than others, but the excitement of the crowd just grew steadily until the end of the show, reaching its peak during the encore, which included an acapella version of “As a Card” from Mumps, etc., but not quite boiling over during the final song, “Gemini (Birthday Song)”—a personal favorite of mine—also from Elephant Eyelash.

Yoni Wolf is amazing on stage. It’s impossible not to fall in love with him a little seeing how weird and unapologetic about being weird he is on stage. His dance moves were somewhere in between Igor and Bobby Brown, and were adorable. Sometimes he paced the stage like a wild animal trapped in a sweaty sweater, and other times he moved off the stage and the band just did its thing. The audience ate it up, and loved him for doing his thing. He’s kind of a weird, hairy little artistic genius and it shows. Now that I think about it, yeah, it was a little mind blowing.