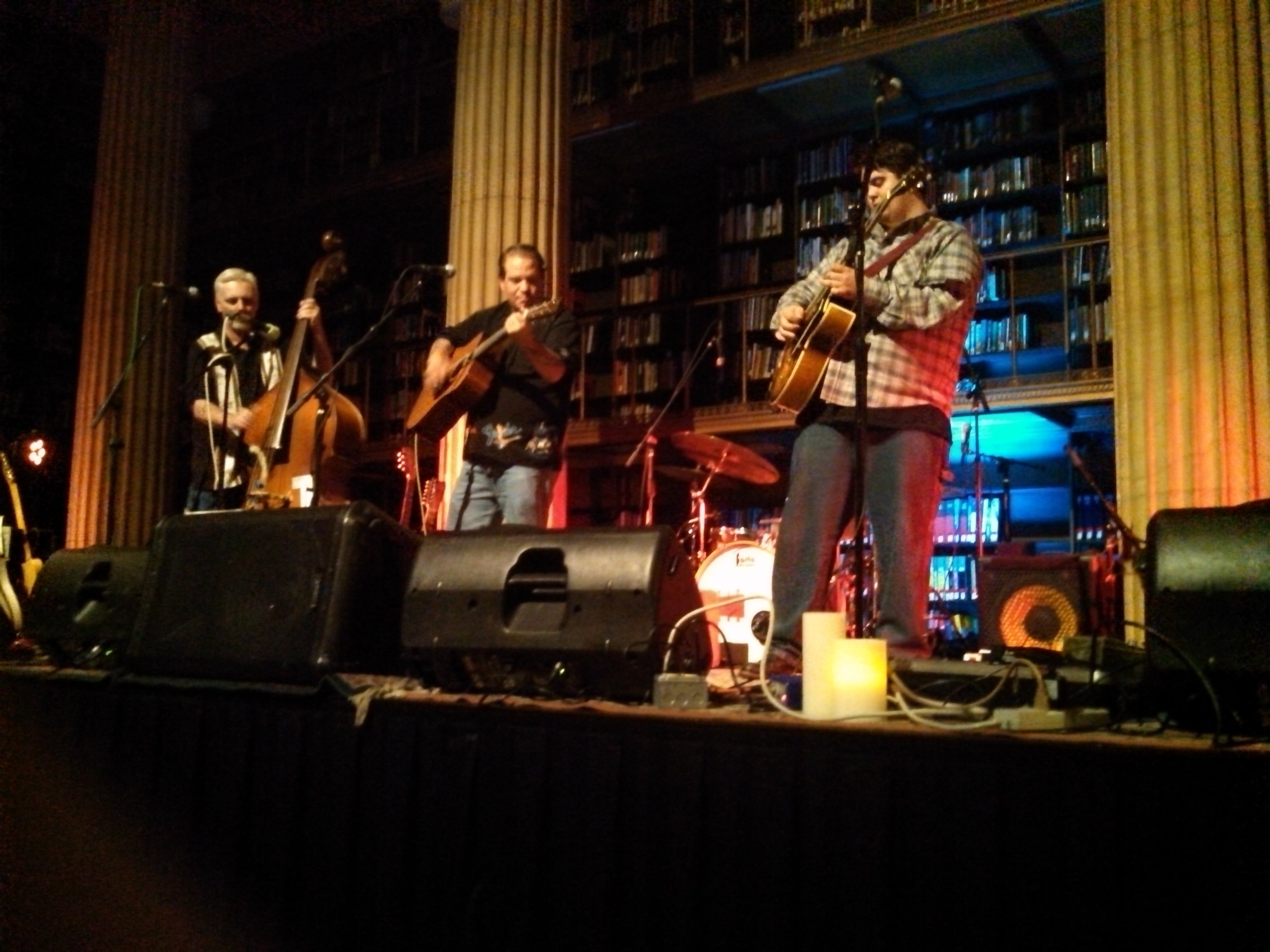 Wayne “The Train” Hancock and libraries are not what you’d call a natural combination but it certainly worked Thursday (Sep 19) at Real Phonic Radio’s monthly show at the Jame J Hill Library. Hancock played recently with Reverend Horton Heat and Deke Dickerson at First Avenue – this was a different show. It included a lot more blues with the Western Swing (almost Rockabilly) Country blend and it better highlighted the band backing Hancock.

Hancock started with some pretty bluesy songs – such as “Louisiana Blues” and “Fair Weather Blues”. He got progressively faster with some crowd-requested favorites including “Juke Joint Jumpin’”, “87 Southbound” and “Johnny Law”. I’ve only been to the Real Phonic Radio a handful of times but I have to say this is the first time I’ve seen people get up and dance. For a former librarian who loves music, seeing people dance in the stacks is worth the price of admission!

Hankcock traveled with his band. Zach Sweeney on lead guitar, Jim Karrow on Standup Bass. And a special appearance of Jason on horn. Sweeney is a big guy who can play guitar! It was fun to watch him play, change tempo, change direction, play super-fast as if it were effortless.

Real Phonic Radio also welcomed Javier Trejo to the stage. Trejo is a local musician, originally from Mexico. Like Sweeney, watching Trejo play guitar is tiring! His fingers just fly over the strings about a fast as I have seen anyone play. But it’s not hard and fast, it fast and melodious. You can hear the Mexican influence in the music. His songs feel like stories. There was one that started off like a tango and somehow mixed a little ska into the beat before circling back to tango.

Hancock observed of Trejo – Trejo can play in Spanish, I can sing and cuss. It was a funny remark but astute. The added depth of culture made Trejo’s music rich. Although the roadhouse feel to Hancock’s music made it fun and dance-worthy.

Rounding out the show was Erik Koskinen and the Real Phonic Radio Band (Paul Bergen, JT Bates and special guest Liz Draper, who often plays with the Cactus Blossoms). Koskinen and band have not been playing as often in town as they have previously They played a few standards with slightly different twists. There was a lively version of “Tell Me It’s True” and a sultry version of a song about a red dress.

If the show sounds interesting, you might have a second chance to see at least Hancock, Koskinen and band at the Silver Dome Ballroom on Friday September 20. The Ballroom is a drive in Neillsvile Wisconsin, but it’s a great place to see a show.