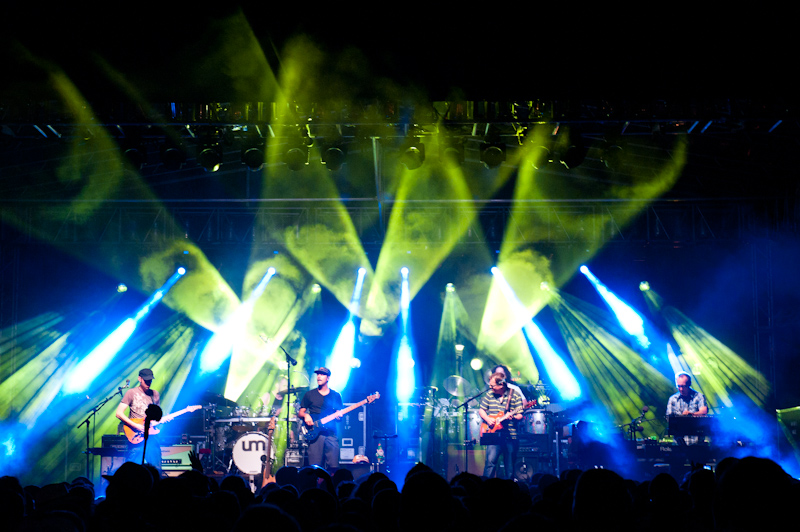 Umphrey’s McGee is a progressive rock jamband from Chicago, who got their start in South Bend, Indiana at the University of Notre Dame in the late nineties. Back then, after gaining a local following, the band began touring across the Midwest, and one of those early stops was The Cabooze in Minneapolis. Having long outgrown that small stage, the sextet, made a triumphant return on Friday, July 5 to play The Cabooze Outdoor Plaza.

The parking lot venue, nestled in between The Cabooze and The Whisky Junction next door, was moderately full and feeling very much like summer with a lot of sun and wind when Umphrey’s McGee took the stage at 7pm. By the end of the night the crowd was packed in tight, with just enough room to move freely.

The first set of the night was heavy on older material, including a bouncy “Phil’s Farm” that got the crowd boogying early, and later the A Flock of Seagulls “I Ran” cover. The highlight of the first set, however, was the bridge on the band’s song, “Thin Air,” when keyboardist Joel Cummins took over for a piano solo that built strongly with dynamics full of emotion. It was very beautiful.

After a short break, the band returned to the stage to the crowd chanting “U.S.A.” The second set again was loaded with older material. Always a crowd pleaser, “Women, Wine and Song” from the band’s 2006  album Safety in Numbers was fantastic. The “Heart and Soul” cover, originally done by Umphrey’s friend and sometimes-collaborator Huey Lewis, was a nice surprise as well. By this time the sunlight was relenting, and the band’s obvious seventh man, Jefferson Waful, was able to light up the stage beautifully.

The night ended with the electro-thumping, and very danceable, “The Triple Wide” which merged back into “Phil’s Farm” that was started earlier in the night. Umphrey’s McGee sounded amazing, and the light show towards the end of the show was great. I heard several people who apparently went to the show on a whim state, “Aren’t you glad we came?” Even after fifteen years as a band, Umphrey’s McGee is still making new fans at every show.