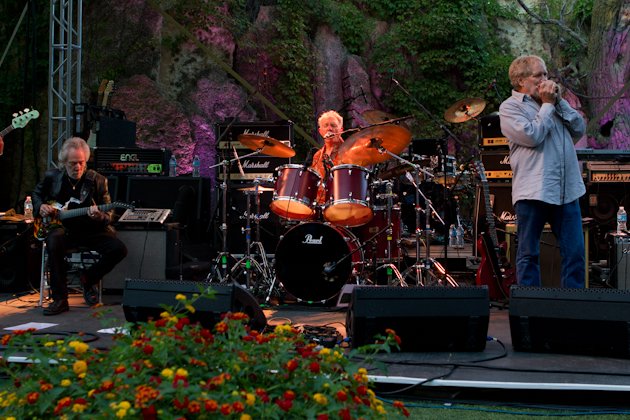 The Rock ‘N’ Blues Fest made a stop in Apple Valley on Wednesday, August 7 in another installment of Music at the Zoo.

Canned Heat was first to take the stage. The band gained a huge fan base after performing at a number of music festivals throughout the late 1960s, most notably Woodstock in 1969.

“Are you ready for some blues?” They asked after lead guitarist Harvey Mandel squealed out a signature solo to close out the opening song. They switched instruments between songs like “On The Road Again” and “Let’s Work Together.” The biggest crowd response came when they fired up their hit “Going Up The Country.”

After a rather lengthy break, Pat Travers came out to rock. He wore a blue shirt, unbuttoned, like only rock stars can and played through five songs, in what seemed like the quickest set of the evening. He played a lively version of “Boom, Boom” and the crowd would enthusiastically respond, “out go the lights!” He also played a song called “Diamond Girl,” off his new album. Initially met by a few disappointed groans, he won the crowd over by song’s end.

When Rick Derringer calmly walked out around dusk, he grabbed his guitar and asked, “Are you ready to rock?” The answer was a resounding yes! He played newer songs like “Sometimes” and old favorites like, “Rock N Roll, Hoochy Koo.”

“Let’s take ’em back to the 60s,” he said as he started in on the number 1 hit, “Hang on Sloopy.” Derringer was part of the pop group The McCoys who recorded the single in 1965. He even treated fans to a never before heard second verse.

“I’m going to right a longstanding injustice,” he said tongue firmly in cheek while explaining how the “hotshot” New York City producers had edited out the second verse of the song before it was released. He closed his set with an epic guitar solo that probably lasted close to 5 minutes.

Musical chameleon and multi-instrumentalist Edgar Winter came out to “Tobacco Road.” During the extended rendition he would switch between his stack of keyboards and saxophone to play the various parts. He “beat boxed” guitar licks that would then be echoed back by the lead guitarist, each lick growing more complex. The same back and forth continued with the bass player and even the drummer with various drum rolls. It showcased Winter’s extensive musical prowess and an inside look at how many of his songs are created.

Winter spoke of his start playing the organ and piano and his frustration of being stuck behind the keys.

“Making me the first person in the history of music, to do this,” grabbing a strap attached to one of his keyboards and placing it over his head. He played “Frankenstein,” again switching between keyboards, saxophone and even his own toms with cowbell. He brought out Rick Derringer for “Free Ride,” and the crowd stood and clapped in time.

Closing out the festivities was the group, Ten Years After. Like Canned Heat, Ten Years After gained notoriety after performing at the music festival, Woodstock. The group lost their lead singer, Alvin Lee, this year and dedicated the song “I’d Love to Change the World” to him.

Most of the performers seen at Rock ‘N’ Blues Fest have been recording and performing for five decades. It was incredible to see them all still performing at a high level. It wasn’t a pitch-perfect night vocally and it would have been nice to see more from a few acts, but there was simply too much show in too little time.

Wednesday night was wonderful collection of true rock ‘n’ roll and blues on display at the Zoo.

The Venue: Named “best outdoor music venue” in 2012 by MPLS. St. Paul Magazine, the Weesner Family Amphitheater in the Minnesota Zoo is celebrating its 21st year of the Music in the Zoo summer music series.

Extra: With all the classic 60s and 70s acts on the card, it was a mix of tie-dye and Tommy Bahama in the audience. It was a subdued crowd early, but things definitely picked up throughout the night.