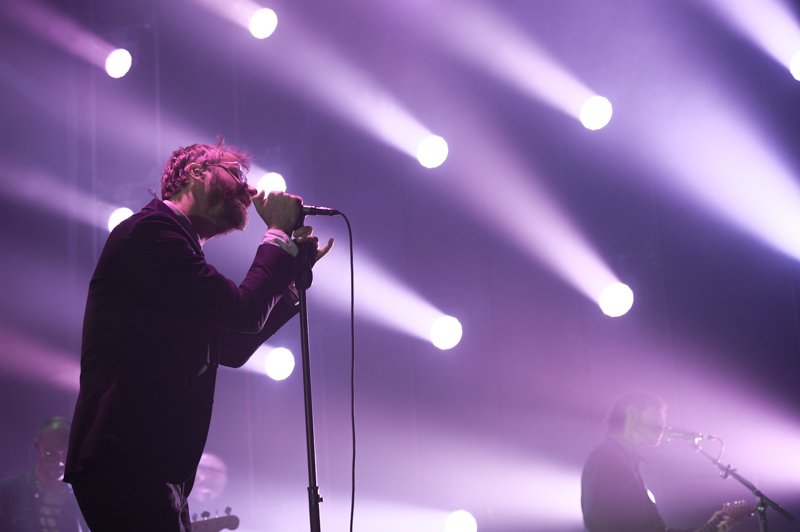 About halfway through The National’s performance last night at Roy Wilkins Auditorium lead singer Matt Berninger explained that though some of their songs are sad, others love songs, they’re all intended to “make you feel better.” I fully expected the set to slay me emotionally, and made sure my plans for a post-show drink with friends were only tentative should I need to sit alone and feel all the feelings. But that wasn’t necessary. While it is easy to listen to Berninger’s arresting baritone and hear angst and depression, there’s an underlying optimism that trouble may find you, humiliation happens, but in the end–to borrow a phrase–it gets better. This subterranean positivity was palpable throughout the performance.

The evening’s set (below) spanned five albums and nine years, leaning heavily on the band’s most recent album, Trouble Will Find Me, and the popular High Violet. Berninger and company easily traversed their varied repertoire – one minute contemplative and understated, the next angry and aggressive. They reminded me that while I quickly lump The National in with their emotive indie collaborators (Sufjan Stevens, St. Vincent, Doveman, and Minnesota’s Dark Dark Dark), they really are a rock band.

A rock band with a waistcoated frontman. Berninger paces and twists – you can’t really call it dancing – in a way that harkens back to high school era moshing. That’s his charm, though. His self-deprecating humor, mid-song shoegazing, and on stage drink of choice (white wine) make him feel like that guy from college who you knew would grow into himself someday. And just like that, he does, walking out into the crowd for the entirety of “Mr. November,” and clearly loving it. He’s talented but at moments unsure, successful but also noticeably uncomfortable. He’s moved from playing the 400 Bar to Roy Wilkins, but still gave Nona Marie Invie an incredibly awkward hug as she exited the stage after “Don’t Swallow the Cap.”

This tension, the both/and of discomfort and beauty, is what has always characterized The National for me. Their lyrics are gut wrenching at times; both the understated and overt moments in their orchestration hit hard. What this show convinced me of, though, was that I should not be concerned about their staying power. Berninger’s reassurance that their songs will “make you feel better,” doesn’t just speak to the anxiety I had senior year, listening to High Violet and bracing myself for life beyond my college cocoon. They’re not what I call a “time capsule band,” bringing you back to the place and time you first heard them, but no longer applicable. They’re still creating, and still beautiful in their emotional mess and musical clarity. As the auditorium sang “Vanderlyle Crybaby Geeks” with minimal accompaniment I realized I’m still anxious, I’m still sad and in love, and The National is too.

Daughter opened for The National.