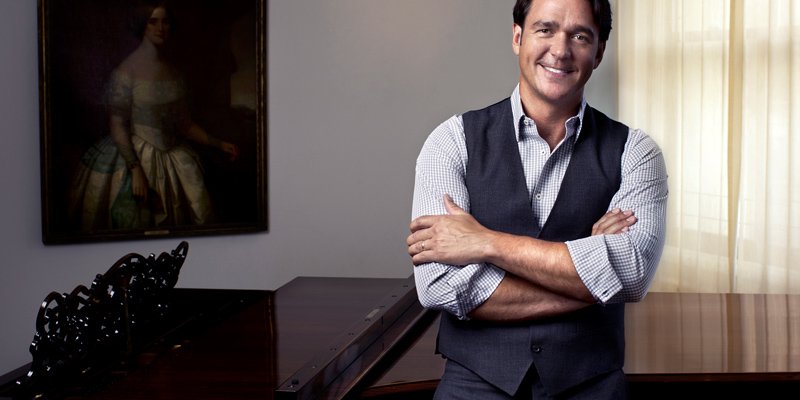 Audiences at the Ordway on Tuesday night were treated to an intimate recital of lieder and American art songs. Baritone Nathan Gunn and his wife, pianist Julie Jordan Gunn, were the featured performers for a show that was almost done in by the cascading series of problems still afflicting Chicago’s Midway and O’Hare airports. Fortunately for the audience, a few planes did manage to claw their way out of the Windy City during its current tumult.

The program consisted of a mixture of classic German lieder by Schumann, Schubert, and Wolf, cut with 20th-century American art songs by Samuel Barber and Charles Ives. The Gunns came out first with Robert Schumann’s famous song cycle Dichterliebe (“A Poet’s Love”, 1840), presented in its entirety. This laid down the basic style of performance for the evening: measured and economical in expression, with something of a rich but covered sound. This was very different than how Nathan Gunn normally appears (vocally and visually) on the operatic stage, a point that will be returned to later.

That Dichterliebe was received very well was quite clear: not only were the gaps between songs occasionally interrupted by spontaneous applause (especially the well-known “Ich grolle nicht”), but the majority of the audience sat basking in the musical sound throughout, rather than scrutinizing the printed translations. Oddly enough, Gunn’s German diction carried through the expanses of the Ordway better than his English lyrics, as the English-language songs almost without exception found the audience buried in their programs. The German songs in general came across as the most resonant and expressive, and the performance of “General Booth Enters Into Heaven” was more understated than expected.

If the fans that turned out on Tuesday were disappointed by anything, it seemed to be largely on one of two grounds. The first was that Mr. Gunn, often hailed as the über-barihunk of barihunks, kept his tuxedo shirt on throughout the performance, rather than singing bare-chested and guns out as he often does on the operatic stage. The second was that the singer, an internationally famous opera star, did not sing a single operatic aria in the whole evening. (The closest that he came was the encore “Brother, Can You Spare a Dime?”, from the 1932 musical Americana.) These factors contributed to a general sense of restraint in the musical evening–not that the performances weren’t enjoyable, but that there was less raising of the roof than hoped for on the stage end of things. This may be a sign that it’s time for a program refresh, as the songlist on Tuesday has a great deal in common with musicians’ recital program from two years’ prior. The disappointment, however, was brief, because Nathan Gunn live was still far better than Nathan Gunn on any recording.